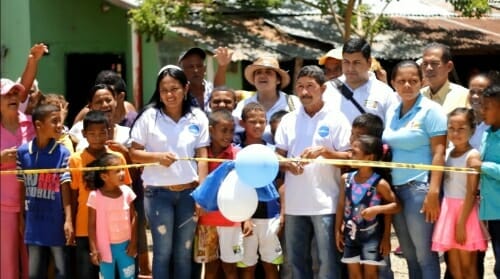 What started as a normal Sunday quickly became one of the most awaited days for the community of La Balsa in the municipality of La Apartada. That morning was the official launch of the bio-healthy park, one of the initiatives prioritized by the La Balsa community under Global Communities’ ANDA Program. ANDA, which means “Go Forward” uses Global Communities’ Participatory Action for Community Enhancement (PACE) to  strengthen the ability of local communities to work together to map their assets and strengths, identify priority needs and mobilize resources to complete community projects. The program is funded by BHP-BSC Billiton Sustainable Communities.

Before starting with the launch meeting, some of the Community Management Committee members could be seen walking down the streets collecting plastic chairs, running sound tests on the microphones at the park and getting ready to host the community assembly where dozens of community members would gather for the park’s launching ceremony.

When the ANDA Program’s staff showed up everything was perfectly set up and organized. The community members were eager, youth were wearing their psychosocial promoter shirts with pride and the communications collective had their cameras and recorders to capture all the action.

When the assembly started, the Community Management Committee went up on stage to present the project to the community, with transparency always a main goal. They explained the PACE methodology, the step by step process where they identified the need and all of the later stages the project went through in order to reach its objective.

Then, they surprised the community with great news—the park would be named after one of the indisputable leaders of the community, a person who has tirelessly fought for the progress of La Balsa: Mr. Gustavo Romero.

Mr. Gustavo was very excited. As he adjusted the microphone to express his gratitude for this gesture, his eyes shone with pride at a job not only accomplished but accomplished well. It was something he had never expected, completely surprising him. He spoke concisely but with words filled with emotion as he said “It is an honor that my name will become a landmark in the community that saw me grow into who I am today.”

At the end of the assembly, Gustavo, with a pair of scissors in hand, cut the ribbon as a symbol of the official launch of the bio-healthy park in the community of La Balsa, a space that will be fundamental for recreation and sporting for the entire community.

Published 10/04/2016 by Global Communities in Blog, Colombia, The Americas