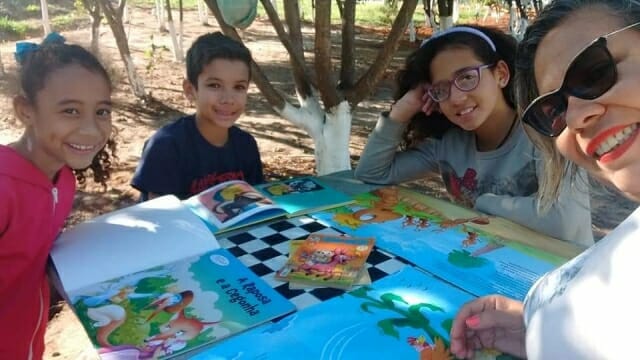 The residents of Jardim Nova América, in Campinas/SP now have a leisure space for families to enjoy. After months of dedication, during which community leaders from the neighborhood association were committed to carrying out the park revitalization project, the space will be handed over to the community. The project, supported by the Sowing Futures Community Fund, made it possible for residents to realize an old dream.

Global Communities community development expert Daiane Martins points out that the project takes on one of the improvements mapped for the neighborhood. “One of the demands identified by community leaders was the lack of leisure spaces. The neighborhood is very large and has virtually no entertainment options. After identifying this opportunity for improvement, the group met to write the project, plan the actions, and then execute them.”
Throughout three weekend collaborations, community volunteers revitalized the site on the boundaries of the Santos Dumont Highway and at the entrance to the neighborhood, pruning trees, mowing the tall grass, planting seedlings near the street, setting up benches and tables, and painting tree trunks and tires, which were used as planters.

José Edinaldo Feitosa, one of the leaders responsible for the project, says he is happy with the result achieved through community work and emphasizes the importance of the planning stage. “I believe the revival of the park started well before the day of action. It took several months of meeting weekly to plan the project and then apply for the Community Fund. I also recognize Participatory Community Management Training (PACE), since this was where we were able to gather several neighborhood leaders and discuss the needs and priorities of Jardim Nova América,” he said.

The community leader also notes the participation of people from the community, who are not currently on the coordination team.

“During the three days of revitalization we had good participation of the residents of the neighborhood. I believe this is a good start for their participation to turn into something bigger in the future. Participation is still shy, because actions like this were not frequent in our neighborhood, but I believe that, with this result, people will be more interested in participating,” he said.

The project also received the support of Campinas City Hall, which helped with pruning trees, cleaning the site, and will make the sidewalk around the area.

“Winning the support of the government was fundamental to the success of this action. With it, we were able to think higher and expand the revitalization project, thus leaving a greater legacy for the neighborhood,” says Edinaldo.

After much work and dedication, Jardim Nova América’s green space is revitalized, and now has family-friendly living spaces, such as game tables and picnic areas, for example. In addition, a mini-library was installed—a refrigerator that houses books, through the special touch of a neighborhood artist. The books that feed the new community library were donations from residents and John Deere volunteers.

Community in Action
Global Communities, through the John Deere Foundation-funded Sowing the Future Program, encourages community development by building capacity in local communities to seek improvements to their priority needs through democratic practices, becoming self-determined and developing their community self-reliance. This approach is worked on with staged communities and they in turn build their capacity to control community goods and mobilize resources to solve a given problem, as well as strengthening flexibility and social unity.

Published 07/24/2019 by Global Communities in Blog, Brazil, The Americas