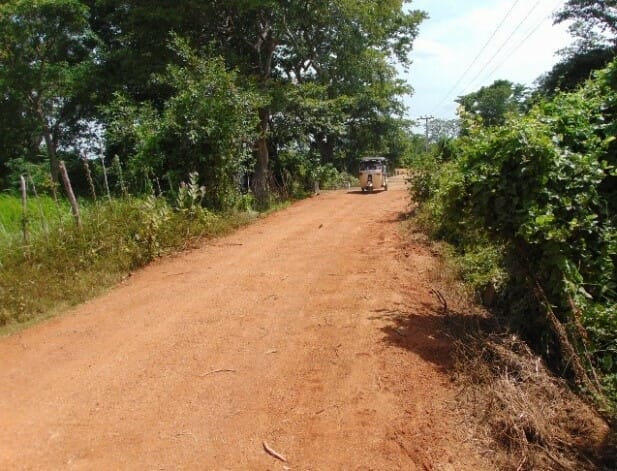 SCORE supports access road renovation to improve inter-ethnic relations
Nimal Rajapaksa, a Sinhalese mason from the Agbopura new settlement area, travels on his motorcycle to a construction site in the Tamil-majority Vavuniya town using the newly renovated access road in Agbopura in Vavuniya South in the war-torn North of Sri Lanka.

Previously, he had to travel eight kilometers extra, taking over an hour and half to reach the Vavuniya town prior to the renovation of the road. Since the road was repaired with USAID support under the SCORE project, his travel time was cut down by more than half, and he has better access to the Vavuniya town, giving him greater opportunity for work in those areas due to better ties with the Tamil community. SCORE is a three-year social cohesion and reconciliation activity implemented by Global Communities to strengthen Sri Lankan led efforts to advance social cohesion and reconciliation in Sri Lanka through community platforms.

“There’s more work for me in this part of Vavuniya because there is a lot of construction work taking place. I built better relations with the Tamil people here due to better access to the town, and I became more aware of work opportunities. Even my livelihood received a boost because of the new relations built with the Tamil people.” ⁠— Nimal Rajapaksa

The Agbopura access road, running 1.1 km, connects about 130 Tamil families and 215 Sinhalese families in the adjoining villages with the Vavuniya town. The need for the renovation of the road was strongly felt by the communities due to the easy access and strengthened relations with other communities. The road was impassable earlier except for bicycles, especially during rainy seasons when the road was submerged. The people from the other side of the town had to spend more travel time to access government services, schools and health facilities available at the Vavuniya town.

“We had to spend over one and half hours to take a patient to the Vavuniya hospital. But now, it takes only half an hour” Rajapaksa added.

After renovation, the road helps villagers to transport their goods easily, opening more market opportunities and strengthening inter-ethnic relations. The renovation of the road was a priority for the villagers and significantly, they too contributed through voluntary work to clear the roadsides for the road renovation work.
Eleven-year-old Heshan is also a beneficiary of this community-driven project. He says he now has better attendance at school. “Earlier, during the rainy season, I was not able to go to school as the road was so bad. Sometimes I get late as I had to travel a long distance using alternate routes to get to school. But now, this is not so,” said Heshan.

USAID assistance has thus contributed in creating a cohesive Sri Lankan identity through this constructive community engagement through its reconciliation and community-driven initiative to promote social cohesion across divided communities. The project has also helped reduce socioeconomic disparities and exclusion by advancing  conflict-affected populations and improving economic opportunities of these marginalized communities by providing better access to them.