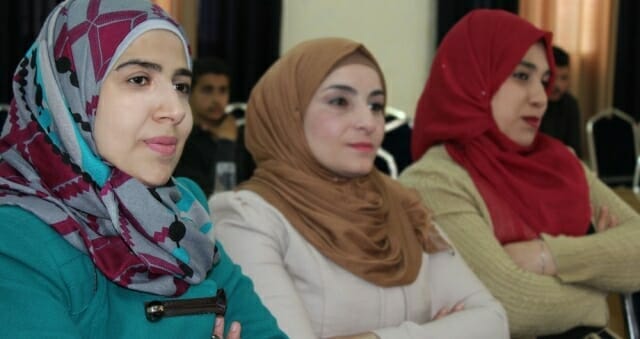 Durreyeh Neqdeli — Committed to Serving Her New Community
Young refugee helps bridge the gap between Syrians and Jordanians through community service
Durreyeh (on left) is the first Syrian member of the Community Enhancement Team in her small community in Jordan.

Durreyeh Neqdeli is only 25 years old, but she has already experienced a lot. Five years ago her family made the difficult decision to leave their home in Syria and move the family to the safety of Jordan. With her parents and four siblings, the Neqdelis found refuge in No’aimeh, a small community in Irbid City. They arrived with nothing, but full of hope for a fresh start.

Syrian families often face social, psychological and economic challenges as they work to rebuild their lives. The transition was challenging for Durreyeh and her family. She often felt alone and isolated. “Naturally, we faced difficulties. We were in a bad psychological state. We were frustrated and depressed. We reached the point where we wished for death at any moment,” she explains describing their early days in Jordan.

In No’aimeh, like many Jordanian communities close to the Syrian border, the sudden influx of Syrian refugees has put significant pressure on already strained public services. “We were the fiftieth family to arrive into a small community,” recalls Durreyeh. “At first, we were not fully accepted, which is understandable. But those who accepted us treated us like family and more,” continued Durreyeh, still emotional about the generosity of the community members.

Durreyeh says it is this generosity that motivated her to find a way to give back to the community. Whenever possible, she participated in community activities and volunteered for different projects. Through her volunteering she learned about the No’aimeh Community Enhancement Team (CET). CETs are voluntary bodies composed of male, female and youth representatives who are nominated by the community help identify, design and implement projects that address community-identified stressors. CETs were developed under the USAID Community Engagement Project, which builds the capacity of residents, municipalities and local organizations to identify and alleviate problems affecting the population in order to leave behind stronger, more cohesive and resilient communities.

Durreyeh with her parents at home. Their transition to Jordan was challenging at first, but Durreyeh was touched by the generosity of her fellow community members and started volunteering as a way to give back to those who had helped her and her family.

For a year, Durreyeh faithfully participated in all of the CET’s activities. “I was impressed by the CET’s approach, and how activities are built on community needs and strengthened by community engagement. The CET’s activities are so different from other projects I worked on. They achieve results and help improve an area on many different levels. I am proud to say that I was a part of an effort that helped rehabilitate our Youth Club which is now able to serve us better, and that our streets are lit more brightly because of the CET’s and municipality’s efforts. There are many other achievements,” Durreyeh added passionately. When it came time to nominate new CET members, Durieh was pleased and surprised to be elected as its first Syrian member.

“I want to use my energy to build my new community, No’aimeh. I want to support future projects, especially for youth, and serve as a platform for youth to express their needs and share their talents.”