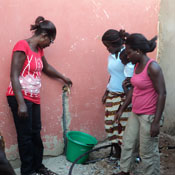 In today’s partisan environment, we don’t expect most legislation to make it to the floor for a vote, let alone pass both chambers and ultimately be signed into law. And yet earlier this year, we saw the Electrify Africa Act become law, passing with broad bipartisan support. For those of us who believe that tackling Africa’s electrification problem is vital to achieving long term development in the region, the passage of the bill was a welcome victory. The law encourages partnerships between USAID, OPIC, the World Bank and other development organizations and the private sector, leveraging private financing to help have an even bigger impact. The law recognizes the need for a variety of energy sources, from more traditional fossil fuels, to renewable energy sources, often powering small micro-grids in hard to reach areas.

Most importantly however, it helps ensure that President Obama’s Power Africa Initiative will continue long after he has left the Oval Office. The initiative has created a roadmap to dramatically improving the continent’s ability to produce and distribute electricity. The initiative tackles this issue via three main pathways: improving production capacity, expanding grid access, and improving regulatory and legal policies. With the first year of the initiative now in the books, officials are working on an ambitious plan to expand the effort and meet the lofty goals set out in the initiative’s roadmap.

All of these elements, from increasing production to improving regulation, are crucial to expanding electricity in Africa. There is, however, one area which, if not addressed, can significantly undermine progress: a lack of community engagement. The investors, engineers and lawyers working on energy access programs tend to focus on project finance and the technical and regulatory aspects of their projects. While these are essential, too often they overlook the end user. A project can be technically innovative, sustainably financed, and have clear regulatory process, but ultimately result in failure if it does not incorporate community behaviors into the process.

People do not exist in a vacuum, and their history with how they have acquired energy in the past will influence how they react to new types of access. Many communities have historically relied on diesel generators, making the idea of paying based on metered usage difficult to budget for when compared to buying fuel up front. In some regions, especially in informal settlements, people might have tapped into existing power lines, bypassing payment, making the prospect of paying for electricity at all seem completely alien. Some may never have had experience of electricity at all and will have no knowledge of how to maintain necessary equipment.

Consider the experience of AES Corp in Georgia. A documentary details the firm’s struggle in the former Soviet republic and its attempt to privatize energy delivery, as the U.S. company took over the formerly state-run institution. Historically, energy was provided free of charge, meaning Georgians had to be introduced to the idea of paying for electricity. This was compounded by geopolitical conflicts which made energy delivery unreliable, further creating community resistance to the new energy company. The result was that 90% of customers refused to pay their bills. Neighborhoods began setting up illegal taps to steal energy from other neighborhoods, creating an unsustainable cycle of energy shortages for citizens and businesses, and low revenue recovery for the power utility. Unable to effectively engage with the community, AES was eventually forced to sell the company to a Russian firm.
This story is not a unique one; despite good intentions, many energy projects flounder as payment rates plateau, or maintenance of critical infrastructure goes unattended.

Community engagement can change this. Involving the community in the process, from the initial design stage through to project completion, creates a two-way street between beneficiaries and implementers. For the community, it gives them a voice in the process, explains their concerns, and communicates how their issues may be addressed most effectively. It also builds trust in the implementers, creating community buy-in. This community-based approach ensures both local pride and local applicability to the project, ultimately leading to sustainable, long-term successes.

An example of community engagement to support energy access is in the Ghanaian boomtown of Sekondi-Takoradi, which has rapidly expanded in recent years following the discovery of nearby oil reserves. There, residents were frustrated by the delivery of electricity; inclement weather would cause blackouts, maintenance requests were delayed or even unanswered, and perhaps most importantly, they didn’t really understand what exactly it was that Electric Company of Ghana actually did or how to get in touch with them. Through the Our City, Our Say program, funded by Making All Voices Count, citizens were encouraged to hold the electrical company accountable. They learned the basics of electrical distribution and citizens were educated on how best to report and follow up with any service issues. But engagement and understanding is a two-way street, and importantly the Electric Company of Ghana also improved how it worked with their customers. They became active on social media, being open about outages and repairs so that customers would have better understanding of maintenance timetables. They invited residents to tour their facilities and receive the latest news, giving the company a chance to discuss their challenges, as well as new programs they were implementing. As a result of this community engagement approach, both Electric Company of Ghana and the residents of Sekondi-Takoradi have become partners in ensuring that electricity, so vital to their growing economy, is adequately delivered.

Electricity’s vast potential to transform the way poor people live will continue to be a vital component of global development efforts. The Electrify Africa Act and Power Africa Initiative show that are policy makers understand this and are committed to furthering the goal of improving electrical access. To ensure that these advancements are useful for the communities who need them, we need to engage these communities fully.  If we are to succeed in making energy access universal, we need to motivate communities to engage in sustainable energy usage.
Robyn McGuckin is the Vice President for International Operations at Global Communities, a development organization committed to working in partnership with communities to bring about changes that improve the lives and livelihoods of the vulnerable. Ms. McGuckin’s international & infrastructure work resulted in two consecutive years of distinction as one of the Top 100 Energy Professionals in “Who’s Who in Energy,” and within the Top Ten Renewable Energy Professionals.