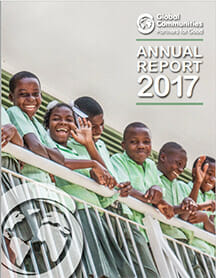 Global Communities 2017 Annual Report
In 1990, more than 37 percent of the global population lived on less than $1.90 a day; in 2015, that number decreased to 9.6 percent. In 1988, there were 350,000 cases of naturally occurring polio reported worldwide; in 2017, this number dropped to 22. Efforts against malaria, such as those Global Communities undertakes in Honduras with the support of the Global Fund, have resulted in the mortality rate decreasing by 29 percent since 2010. In Honduras, these efforts are on the cusp of eliminating the disease from the country entirely. These advances are not just limited to decreased poverty and disease, as the data shows that many economies are becoming less reliant on foreign assistance as more investment flows into the developing world, and quality of life is improving for many communities. All of this showcases just how much progress we have made.

And yet, we still have more to do. This next phase, whether it is the elimination of extreme poverty, winning the fight against HIV and AIDS, or addressing any of the numerous crises throughout the world, will be even more challenging than the issues that global development has addressed in the 66 years since Global Communities was founded. Take the Middle East, where conflicts in Syria and Yemen have fueled the largest refugee crisis since World War II. Syria is now our largest area of operations, with our programs helping refugees, displaced persons, and host communities whose lives have been disrupted by war. After we partnered to stop the Ebola epidemic in its tracks in Liberia, the next disease to threaten the world was Zika, which we continue to combat in Honduras; and we know there will be more outbreaks of new diseases in the future. Natural disasters are increasing, with more extreme weather events, such as the tropical storms which brutalized Caribbean countries and the United States alike last year.

In cases like these, an immediate response is always necessary to help alleviate suffering and bring a crisis to an end. But it cannot be the only answer. An adequate response must take into account long-term resilience, even in the midst of the crisis. At Global Communities, we seek to partner with governments, civil society and the private sector to build resilience at the community level. We understand that this means looking beyond traditional donor funding to blended finance models, engaging the private sector, and working in partnership across all sectors to ensure that communities have the ability to withstand and bounce back from stresses and shocks. Whether this is in the areas of sanitation, nutrition, preventing corruption, positive youth development, or programs that integrate all of these areas and more, we always approach global development by engaging the community in such a way that they can lead their own development for the long-term.

This is the work, undertaken in some of the most demanding environments, which defines Global Communities. I invite you to read this report and see how, by partnering today, together we can help communities across the world lead their own way.