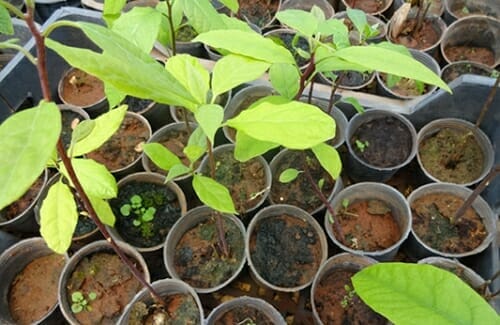 Agriculture is Lebanon’s third most important sector, employing about 15% of the active population. Global Communities has been instrumental in supporting and expanding agricultural businesses in Lebanon by working closely with the USDA-funded Lebanon Apple Production Improvement Program (LAPI), which introduced a mechanism for quality control and food safety for the production of apples in northern Lebanon. Production is vastly improved through best agricultural practices and production techniques throughout all stages of production. Liban Village, a fruit producer founded in 2001 in the north’s mountainous region, has worked with 15 cooperatives, 150 farmers, eight exporters, five distributors and numerous wholesalers, grocery stores and mini-markets, throughout the country, providing them with technical support for their farming businesses and helping them overcome challenges such reduced exports and imports because of closed borders due to the conflict in Syria.

Adapting to the changing environment, Liban Village shifted away from traditional management to industrial ways to resolve agricultural problems. They also assist growers in finding new projects and partnerships, train them to achieve needed certifications and provide workshops to expand skills and provide networking opportunities.
When Liban Village opened its doors it had just one building but eventually built an extension to include refrigeration rooms and did other upgrades. Their increased business has enabled them to purchase the most advanced sorting machine in the country, which processes 150,000 crates – 600 tons – during the apple season. Bruising can be a serious problem in apple production, but the sorting machine reduces apple bruising by 25% (compared with manual sorting), and has reduced overall costs by 20%.

Today Liban Village manages a significant portion of the farming industry in Lebanon. It employs 75 workers (including 60 Syrians) after starting with just four employees many years ago. They have expanded to sorting and crating apples, and are working with local businesses on applying modern agricultural practices to ensure higher quality and more variety. They also added cooling warehouses to extend the life of the fruit, ventilation systems and implemented a better inventory system. They also explore and teach new farming technologies, and how to manage and reuse interventions during peak season as well as post-harvest.

Liban Village has imparted this knowledge to additional farmers and businesses and now works with them to apply similar lessons to the production of cherries and peaches. Global Communities worked with Liban Village to assess agricultural supply and demand.   They determined that produce is the most important product in Lebanon because while its production has gone down, it is the most requested commodity. The land in the north is ideal for farming, so Liban Village worked with farmers to produce fruit in the off-season (apple season is typically April-August) to help pay for other crops. They started providing technical support and introducing new technologies in cherry cultivation. This led to further funding, which was used in part for a partnership with the University of California at Davis, thus opening the doors to private sector and nonprofit organizations, and implementing a lucrative production line. This partnership was built on the trust Global Communities built for years in Lebanon, and the partnership reinforced that trust and helped us reach many more beneficiaries.

Building Capacity and Supporting Farmers in Lebanon
The Association for the Development of Rural Capacities (ADR) has worked with Global Communities for more than 15 years on agriculture and education in underserved rural communities in Lebanon. ADR decided in 1997 to respond to the increasing needs in northern Lebanon by supporting farming projects. Thirty-percent of the area depends on agriculture for their livelihoods, so Foundation opened the areas first agricultural center to support local farmers and families living in remote areas in the north. The benefits are many since farmers receive assistance to help them grow and improve their harvests, communities are boosted by increased commerce and young people are educated and trained in agricultural engineering. Global Communities also worked with growers on issues like finance, transparency, networking and compliance – all crucial to running a successful business.

Prior to the 2006 war, university students in the area worked summers in the tourist trade, but when those opportunities dried up, Global Communities partnered with ADR to train students and build their capacity in newly opened businesses including a plant nursery, a unit for dairy production, cold storage facilities for fruit and vegetable production and meat processing. By expanding new facilities with new technologies in various sectors, the partnership continues today to meet agricultural demand – which has increased since borders have closed – and provided technical support to help the communities impart long-term solutions to economic and food security problems. These interventions have also helped facilitate cooperative opportunities that benefit thousands of families.

Implementing these interventions required Global Communities to address a number of challenges. Poor infrastructure and limited water posed problems. Also, cultural differences presented a problem among the 300 farmers initially involved in the project. Some were reluctant to do business with those from other backgrounds and tribes. This also made entering some areas difficult. But we engaged the communities and facilitated dialog among them to ensure they knew their concerns would be heeded and their values protected. We worked with Muslims and Christians to understand their concerns and their differences and explained how they would be better off working together than struggling alone.

For example, several farmers were each using their own methods to transport small quantities for similar jobs at the same time for the same purpose. We sat down with them as a group and explained that by sharing their resources, they could not only reduce the cost of transport, but could share schedules. This way, not all of them would have to wake up at 4am every day to go where their peers were also going. By getting them to focus on common interests, their work has become more efficient and they have become more productive. These newly formed relationships have also eased tensions in other areas; before, children would go to different schools according not only to their religion, but to their specific sect. Now, children of all backgrounds attend the same schools. The community is largely co-mingled as a result of the agricultural practices of their parents in formerly divided communities.
And, proud to be the first to grow and market 11 new kinds of apples in Lebanon, they are now looking to diversify production further and continue to support service providers. The Lebanese climate and altitude are ideal, resulting in quality products at lower prices.

Because of our longtime relationships and proven track record in Lebanon, people were willing to trust us and give the partnership a chance. Now, 20 years later, we work with thousands of people all over north Lebanon to produce and sell various products. These communities trust us and now they trust each other, and they collaborate to their own benefit and to the benefit of other communities.