Global Communities in Lebanon: Education and Employment of Youth 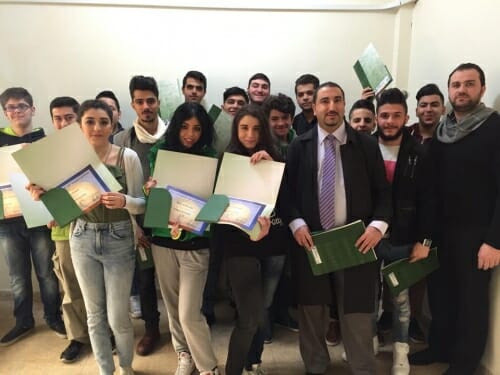 The unemployment rate in Lebanon increased from of 11 to 20 percent during the course of 2014, according to the World Bank. The Lebanese Ministry of Labor put this figure at closer to 25 percent, with youth unemployment at about 36 percent. Not surprisingly, unemployment and competition for jobs is among the greatest sources of conflict between Lebanese and Syrian youth.

As with all of our programming, Global Communities identified the proper needs of the community and then implemented long-term solutions that can be developed and refined over time. Our programs link people together, are sustainable, and are designed to grow, thereby steadily creating more jobs.
In addition to more traditional skills training, Global Communities also provided soft skills training, which is fairly new in the Middle East. This training emphasized less tangible skills, like communications, principles of marketing, resume preparation and money management. Experience shows that this kind of training coupled with more technical instruction yields the most promise for viable, long-term employment, and students emerged from the program highly qualified and confident.

To date, more than 550 Lebanese youth have successfully completed our technical and entrepreneurial and soft skills trainings, and 74% of them have been placed in internships/apprenticeships, jobs or decided to pursue advanced technical learning. The program remains active in several sectors in Lebanon in the fields of IT,), secretarial, and swimming instruction, with trainings in development in heating/air conditioning and electro-mechanical and hospitality. The program has also hosted access-to-finance workshops for all program participants.
MENA YES also differed from other approaches in that other NGOs tend to train and employ non-Lebanese such as Syrians, who will often work for less money. But these youth didn’t benefit from the experience, nor did prospective employers, because they often did not have the skills or experience needed in the private sector. In MENA YES, youth (including Syrians) were well prepared for the job market and in demand. This was particularly important at a time when jobs were harder to get, since the tourism and hospitality industries took a  hit due to the conflict in Syria. Many of the youth expressed happiness that for the first time in their lives they are in demand and empowered.
Training Unemployed Youth with Technical and Soft Skills

The Boubess Group, which operates restaurants, hotels, health clubs and spas in Lebanon,  partnered with Global Communities to collaborate on a 15-20 day program to help reduce the shortage of kitchen help for mid-range restaurants, which are still thriving despite unrest in neighboring countries. “This was a solution to the gap we were facing. It was a very necessary and well-timed solution,” says Mirna Kossaifi of Boubess Group. The first program, to train line cooks, trained school dropouts and people with no degrees. In fact, they looked specifically for young people (aged 19-20) who hadn’t been recruited sooner, because they had no skills.  Then the training and private sectors met and kicked off the program.

Initially many of the youth were not motivated and not committed to the program. They couldn’t see its value, and they wanted cash instead of training, but Global Communities with Boubess Group convinced them to at least try the program, especially since they were uneducated and unemployed and it would cost them nothing. At the end of the training the youth were thoroughly engaged and excited; they were now professionals with a viable source of income.

Much of their enthusiasm and motivation came from not only the knowledge and experience they gained but also from the way they were treated. Trainers treated know how to treat them and motivate them. They were treated with respect, and for many of them, this was a first. MENA YES also helped the youth get past other potential barriers; they provided transportation for the youth, as well as English instruction. The private sector employers that ultimately employed them have been impressed with their skill, work ethic and demeanor, and many companies continue to hire youth out of the program. Boubess emphasized that the program should reach out to young people while they are still in school: either students who stay in school have already declared majors by 19, while others have already dropped out. Getting to them early would help them get in early, leading to steady employment with advancement potential. Says Boubess: “We’ve never seen this level of success because of soft skills. These kids think, someone paid for us?! Motivation is crucial. They had lost hope. Without this set of skills they would have nothing.”

Jamal Huneini, who trained and received certification from Boubess Group, has been a line cook at a French chain restaurant for one year. His passion for cooking started when he was young but he never had any way to make it into something lucrative. He says the interactive nature of the training opened up a new world to him, especially with soft skills such as interview and presentation skills and tips on body language and eye contact.

These days he cooks at home and helps his family financially, both of which he is able to do because of his training with New Horizons. His parents are happy because if he ever gets married he can help his wife with the cooking. He says if he wasn’t doing this he would be driving a taxi and, he believes, barely surviving.

Another private company working with MENA YES is New Horizons, which offers computer training and certification in Lebanon. Their training is geared toward young people aged 17-29 who already have some technical background. Instead, New Horizons focuses on 60 hours of programming with soft skills as well as entrepreneurial training. Almost 600 youth have graduated from the training and gone on to secure jobs, and now New Horizons gets many requests from other NGOs to train youth in the area.

Together MENA YES and companies like Boubess Group and New Horizons demonstrate the tremendous value of public-private partnerships – how high demand is for them, and how easily they can be customized. They help not just the youth and the companies they work for, but they also create more jobs and stimulate the economy, alleviating poverty in especially dire times and offering opportunities when they are scarce.