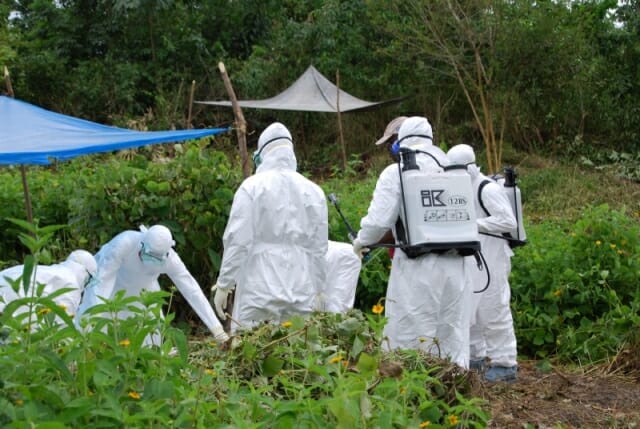 “Why do you only come when someone has died? Why do you not come to help when someone is sick?” This question posed by rural Liberians during the 2014-2015 Ebola crisis revealed broken trust among local communities, the national government and international aid workers, and underscored the tension between local customs and national and international responses to the Ebola crisis in Liberia.

For Global Communities, working in Liberia since 2010, this question inspired action and motivated them to work in a way that fostered Liberia’s self-reliance in the fight against Ebola. Using a community engagement approach grounded in the principles of collaborating, learning, and adapting (CLA) to facilitate locally led development, Global Communities adapted Ebola virus disease prevention and intervention activities in response to local needs and cultural practices, and fostered community buy-in for behavior change. Their efforts focused on reducing Ebola infections through safe and dignified burials, education in Ebola-resistant hygiene and sanitation behaviors, and disease surveillance efforts.

As part of our efforts to examine the evidence base for collaborating, learning, and adapting (CLA), the USAID LEARN contract in support of USAID’s Bureau for Policy, Planning and Learning recently completed a CLA case analysis deep dive to understand whether and how the CLA approaches used by Global Communities contributed to ending the outbreak of Ebola in Liberia. This study adapted methods from Contribution Analysis, Contribution Tracing, and Outcome Harvesting to analyze corroborating evidence and alternative explanations of the outcomes described in Global Communities’ 2015 CLA case competition entry: Rapid Collaboration, Learning, and Adapting: Community-Based Response to Ebola. Below, we discuss our key takeaways from the study. For a more in-depth review of the evidence and a description of CLA integration, check out a briefer and the full report here.

Front-end investments in CLA approaches fostered trust with stakeholders and supported efficient scale-up: Global Communities’ Ebola response built on the positive relationships and reputation it had developed with both government and community leaders while implementing the five-year Improving Water, Sanitation, and Hygiene program (iWASH). For example, at the first signs of the Ebola outbreak in June, 2014, officials in Liberia’s Ministry of Health who were working with Global Communities on the iWASH program reached out to them for help in co-designing an effective Ebola response. Global Communities also collected monitoring data and produced weekly reports on Ebola’s spread. This helped them rapidly reallocate resources to communities most in need throughout the outbreak lifecycle. In addition, based on feedback from community members that had been successfully implementing community-led total sanitation (CLTS) through iWASH, Global Communities commissioned a study about the relationship between CLTS practices and Ebola resistance.The study provided evidence of strong correlations between the presence of CLTS activities and Ebola resistance (Capps, et. al., 2017) and supported the expansion of CLTS into Global Communities’ Ebola response. During the Ebola crisis, interview participants and program materials frequently mentioned how relationships and evidence-based interventions facilitated rapid expansion and effective response efforts.

Collaborative networks unlocked local knowledge and mobilized an array of actors for collective benefit: This CLA approach drew together diverse stakeholders to share the knowledge they possessed in a unified effort to strengthen community resilience to Ebola. The creation of Disco Hill cemetery in Liberia, for example, involved traditional leaders, local communities, Liberian government officials, U.S. government officials, and international NGOs in a shared effort to support safe and dignified burials in Monrovia. During the Ebola crisis, contact with highly contagious dead bodies during burial rites and mourning ceremonies was identified as the most significant driver of disease transmission, accounting for up to 70 percent of new infections by some estimates (Roca, et. al., 2015; Rewar, et. al., 2014). The rapid rates of infection as well as a lack of open land in Monrovia pushed the Government of Liberia to resort to cremating bodies as a first response. This practice, alien to Liberian traditions, made local families resistant to seeking treatment for sick family members and distrustful of the government. The call for an official burial site initially emerged through Global Communities’ work with local communities, whose local leaders sent out urgent requests for a safe burial space. Then, Global Communities engaged with other key stakeholders—various ministries, the Environmental Protection Agency, to name a few—in order to get buy-in for the construction of the cemetery at Disco Hill. The creation of this cemetery resulted in an increase in safe and dignified burials and also contributed to curbing the overall outbreak as family members no longer felt they needed to hide their deceased loved ones from the government and international aid workers. These events corroborate findings in the CLA Literature Review and correspond to the CLA Case Competition Analysis finding that “Collaboration leverages resources for collective benefit.”

CLA approaches supported social inclusion and facilitated diverse, culture-specific adaptations: Global Communities emphasized the importance of including diverse stakeholders, especially vulnerable and hard-to-reach populations, in this effort. For example, they worked closely with traditional leaders to reach the most rural schools. They also organized Muslim burial teams to ensure Muslim-specific burial traditions were respected and set up separate Christian and Muslim sections within the Disco Hill cemetery. Global communities employed CLA approaches that respected cultural traditions and recognized local culture as fluid and dynamic with behavioral changes rooted in continuity with existing beliefs. They engaged trusted sources for messaging, encouraged social learning, and provided both means and opportunities for local agency.

Considerable evidence from the deep dive suggested that Global Communities’ CLA-driven, community engagement strategy to fight Ebola in Liberia fostered local ownership and effective behavior change in communities, facilitating their journey to self-reliance. Local ownership of new health practices not only helped contain the immediate spread of Ebola, but addressed some of the underlying vulnerabilities in community health behaviors and national health care systems to support sustainable disease prevention. Donor flexibility and the active participation of diverse leadership created an enabling environment that was crucial to achieving these results.

Our analysis indicated that CLA approaches implemented by Global Communities made important contributions to ending the Ebola outbreak in Liberia.

So, what are the implications of these findings? The analysis reaffirms the importance of local engagement for better development results and should prompt us to look for opportunities to collaborate with local stakeholders. The evidence also demonstrates that investing in CLA upfront bears results. As leaders and decision-makers in our organizations, we can make time now to integrate CLA approaches into our work, knowing that the return on our investment will likely be significant. Read the brief or full report to learn more.