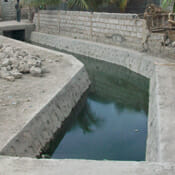 This story was originally published by the International Organization for Migration.
IOM, the UN Migration Agency in Haiti has completed the first road to Canaan, a fringe, partial internally displaced persons community that formed after the 2010 earthquake. The road will benefit approximately 200,000 Haitians currently living in Canaan, most of them with no access to electricity, toilets, essential amenities or state services. This new infrastructure will facilitate access to jobs, schools, and hospitals located outside the community.
Canaan is a tree-less district located on the outskirts of Port-au-Prince. The community is situated off a national highway, Route 1, wedged between salt flats, dry mountains, and the country’s largest waste transformation plant.
In February 2015, USAID and its funding partners embarked on a two-year long, approximately USD 14 million programme aimed at upgrading conditions for the Canaan community. They consulted with the Unité de Construction de Logements et de Bâtiments Publics (UCLBP, Office of the Prime Minister) to support the Government of Haiti’s vision to promote equitable and resilient urban development in the Canaan zone and funded IOM to assist in programme implementation.

IOM Haiti was funded to oversee the construction of 1.3 km of concrete roadway, and the work was completed in the last week of July 2018. Handover to the Ministry of Public Works, Transportation and Communication (MPTPC) with IOM and the construction firm for the road occurred on 27 July 2018, and the formal inauguration will be scheduled in the upcoming weeks. The road was designed for a 20-year lifespan with a significant drainage system following UN-Habitat hydraulic studies for the Canaan area.

“Beyond the objectives of improving and contributing to the development of the Canaan area, this successful project will re-connect and integrate the communities affected by displacement to the urban and social environment and finally make the population ‘visible’ and recognizable,” said Bernard Lami,  IOM Haiti Acting Chief of Mission.
The 1.3 km of the Canaan 3 road starts at the Boukambou canal (Bon Repos Community Hospital) and connects with a segment of path paved by the non-profit organization Global Communities. It now stretches all the way down to National Road 3. The complete loop built by IOM and Global Communities with co-funding from the American Red Cross and USAID creates a strategic roadway connecting Canaan to National Roads 1 and 3.

This segment was identified as a strategic entryway into a densely populated part of Canaan by both the UCLBP and UN-Habitat in their Urban Plan of the Canaan area which was also funded by USAID. The design of this intervention has required close technical coordination between multiple stakeholders including Global Communities, the American Red Cross, MTPTC and the Municipality of Croix-des-Bouquets.

“One kilometre might seem not significant until you observe the impact this road has had on changing people’s lives by providing them dignity and hope for the revitalization of Canaan – their neighbourhood,” said project manager Maria Oliveira Ramos, Head of IOM Haiti’s Urban Development and Engineering Unit.

Published 08/20/2018 by Global Communities in Blog, Haiti, The Americas