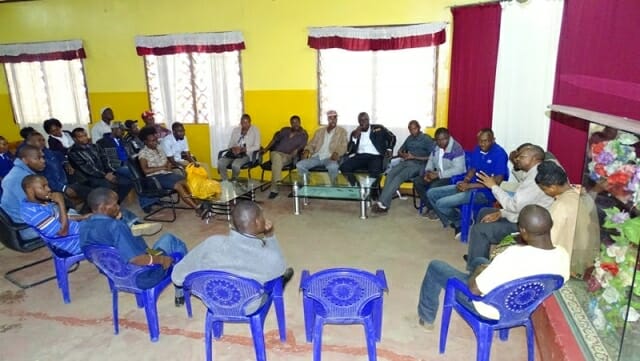 In the slums of Nairobi, male ‘agents of change’ are teaching men and boys how to prevent violence against women and girls in their communities. They tell News Deeply that the fight begins with challenging their own entrenched attitudes about gender.

By Justus Wanzala  |  This article originally appeared in NewsDeeply.
Benjamin Sidori makes a point to the crowd during a training session for men on how to prevent gender-based violence. Photo: Justus Wanzala

NAIROBI, KENYA – It is evening and as the traffic builds up in the streets of Pumwani, Benjamin Sidori is not yet done with his day’s work.

“I am hurrying up to church for a prayer session and a ‘man talk’ with male congregants and this will last up to 10 p.m.,” he says.

Self-effacing but eloquent, Sidori, 36, is a man on a mission. Since last year, the public entertainer who sings and puts on shows in his community has been working through the Pumwani area’s informal settlements in the east of Nairobi to change men’s and boys’ attitudes toward violence against women and girls.

Like many men in his neighborhood, Sidori says he had preconceived, negative ideas about the role and status of women in society. However, he says when he began performing on stage at public events and ceremonies in the Pumwani informal settlements, he started to encounter incidents of gender-based violence.
From his position on stage, he saw men physically assaulting their wives, and young men harrassing women in public. “I began to be touched by the plight of women,” he says.

Male Agents of Change
Sidori is one of the Male Agents of Change working with the Determined, Resilient, Empowered, AIDS-free, Mentored and Safe (DREAMS) lives program. It is being implemented in the slums of Nairobi by Global Communities, an NGO with headquarters in the U.S.

Helped by funds from USAID through the President’s Emergency Plan forAIDS Relief, the DREAMS program started up in Kenya in 2015. Its projects range from fighting gender-based violence to trying to eradicate poverty, especially among marginalized groups such as single mothers, sex workers and disabled women. All these efforts are geared toward reducing new HIV infections.

idori is one of 28 Male Change Agents in the DREAMS program. They have counseled more than 1,000 men about the need to shun violence against women. His hope is to get men in Kenya to stand up against the violence wherever it occurs.

Members of the public carrying banners to denounce gender-based violence on the streets of Nairobi. Photo: Justus Wanzala

The program teaches men the benefits of ending violence in their homes. These can include increased productivity of adults at work and children at school.

DREAMS pushes men to seek treatment in health institutions and get tested for diseases. They are also trained to discard certain behaviors they may have witnessed in their own families while they were growing up.
Joining the project in June last year, Sidori was trained in countering various forms of violence against women and girls. “Most important is that I was able to understand that men must respect women,” he says.

He says he sees a need to fight entrenched social norms, such as attitudes toward family planning: “Men would insist they have a say over the number of kids their wives bear and bar them from accessing contraceptives.”

In Kenya, 39% of women and girls have experienced physical or sexual violence from their intimate partners, U.N. data shows.

Adera says many communities in Kenya are still patriarchal and conservative, with women having no authority over their lives. “Men are the considered custodians of culture and are decision-makers,” she says.
She says shunning oppressive social norms – such as saying a woman’s place is in the kitchen – is vital in ensuring men play a bigger role in women’s empowerment.

Violence, Adera notes, is often associated with substance abuse, poor health outcomes and significant financial burdens. She says the program works because the messages being delivered are more meaningful because the trainers are drawn from within the target communities.

Sidori says involving men in the fight against gender-based violence is yielding positive results. Since the inception of the program, he says he has seen attitudes change.

“I can’t quantify it, but wherever we go out, a sizable number of men and boys usually testify that their attitude about women has changed,” he says.

Sidori says that training sessions also challenge the notion that risk-taking is a sign of manhood. “It is a futile notion that lands them in dangerous situations like contracting HIV/AIDS and even failing to seek timely treatment.”

Resistance From Men
David Odhiambo, another Male Agent of Change, says he focuses on debunking the notion held by men that they are natural leaders.

A married man, before he joined DREAMS he was a firm believer in the traditional gender division of roles. “I could not dare undertake household chores for fear of being branded a ‘henpecked’ husband, but all that has changed.”
The structure of society means that men can sometimes engage in physical or emotional abuse of women without knowing its impact, he says. “It is necessary that men discover themselves, for change begins with individuals. If one undergoes transformation, your family becomes a role model and the whole society benefits.”
Odhiambo says Male Agents of Change can face resistance from fellow men because of cultural and religious factors. Despite the challenges, he is undeterred.

“Peace starts at the family unit. For Kenya to be always at peace, gender-based violence must be fully eradicated,” he insists.