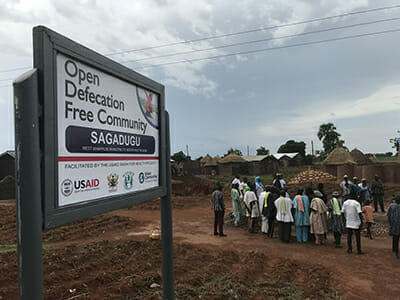 Sagadugu is a village in the West Mamprusi Municipality within the North East Region of Ghana. It is nearly 450 miles north of Ghana’s capital city Accra. Crop farming is the main occupation of the community. The main town of Sagadugu was declared an Open Defecation Free (ODF) community in April of 2018.One of Sagadugu’s local youth activists, Ofilia, reminds her community just how much progress they have made because of their community-led sanitation work. She urges community members to celebrate and continue this progress in order to sustain the Open Defecation Free (ODF) certification, which is a source of pride for the 1,740 residents of this community, 450 miles north of Ghana’s capital city Accra.

In June, the community gathered along with the Global Communities team to celebrate and share updates on the status of the strategy. Global Communities implements the USAID-funded WASH For Health Project in Sagadugu and in several other communities within Ghana. Local youth activists receive training and support as part of the WASH For Health Project. One of the youth activists, Ofilia, stood up and reminded her community of the many benefits they continue to receive from being ODF.One of the many latrines in Sagadugu. Housed inside the external structure is one of the five DIGNI-LOO latrines within this community. Yunus Abdulai, Chief of Party for Global Communities’ USAID-funded Resilience in Northern Ghana (RING) program, demonstrates how the “tippy tap” hand washing station works.“Before, when open defecation was practiced, families would try and grow food around their homes, but they had to worry about eating it,” Ofilia said. “But now, they can pick and prepare the foods they grow and not have to worry that the food will be contaminated with human feces. Instead, now they are enjoying using their latrines and [adjacent] tippy taps.” Ofilia showed the group a hand drawn map of the community at the inception of the program.

At the time, local youth placed red x marks on the map to show where locals practiced open defecation. She was happy to unveil the current map of the community, looking nearly identical with one noticeable change. Green symbols that represent latrines and “tippy taps” exist where the red x marks used to be. Five of the numerous latrines in the community are the DIGNI-LOO. The DIGNI-LOO project recently won USAID’s Private Sector Engagement Award. It is an affordable, reusable, innovative new latrine developed by Global Communities and produced by Duraplast. Tippy taps are low-tech devices used for hand washing made out of readily available recycled sticks and empty water containers. “This intervention has brought us a number of benefits,” Ofilia said. “Before this intervention came, whenever it rained, no one could sit outside because of the offensive odor coming from the feces lying all around. That is now a thing of the past, because anytime it rains now there is no offensive odor. And we are so happy about this.” Becoming ODF has lowered sickness in the community; it has increased individuals’ ability to safely grow and eat their own food; and it has paved the way to broader transformation in the community. The ODF certification is a source of pride and dignity for the community, and the local youth leaders play an important role in sustaining it.