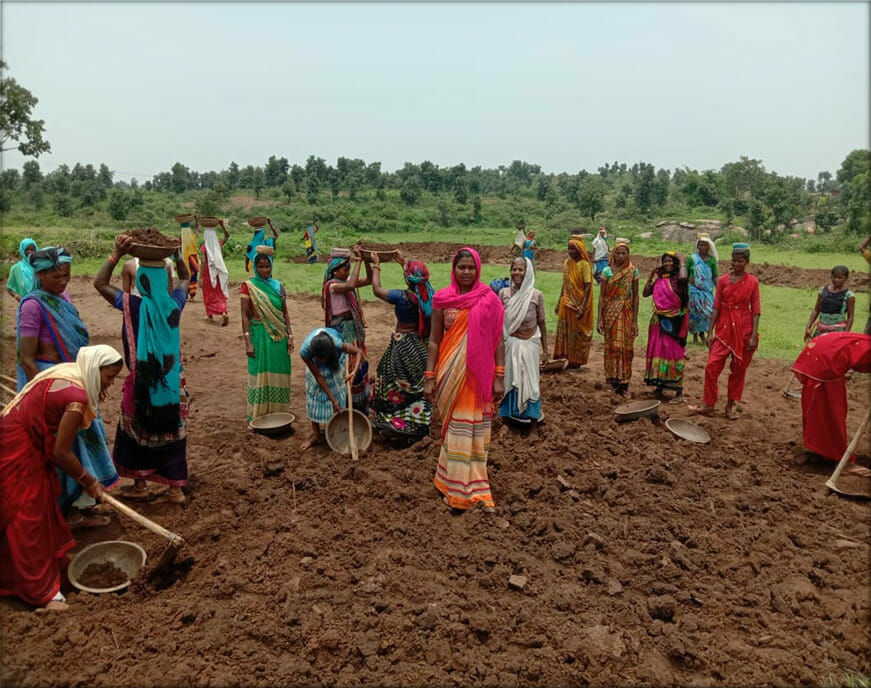 Rajkumari Pal is a mother of three in the Khatkhariya village of Uttar Pradesh’s Mirzapur district in India. Despite having a bachelor’s degree, she was unable to find work outside of her home. When Rajkumari’s husband lost his job as a computer operator at the beginning of the COVID-19 pandemic, the couple suddenly found themselves without a consistent source of income. In hopes of finding a way to provide for her family, Rajkumari joined a self-help group (SHG) through the Government of India’s National Rural Livelihoods Mission – Aajeevika and gradually became a part of the Mahila Mate program.

The Mahila Mate program was launched in March 2021 under the Mahatma Gandhi National Rural Employment Guarantee Act (MGNREGA) to encourage more women to join SHGs and increase their participation in the rural workforce. The program aims to deploy Mahila Mates, or women assistants, to manage and supervise MGNREGA jobs and job sites. Worksites with less than 40 workers must have one Mahila Mate, while those with more than 40 workers are appointed two. A gender analysis of India’s workforce presents a skewed male to female ratio at the national level. Although states like Kerala (88.15%) and Rajasthan (65.9%) show a commendable record of presenting a gender-equitable scenario, states like Uttar Pradesh report only 33 percent of women participating in the workforce.

Mahila Mates are selected from SHGs and Rajkumari’s status as an active SHG member made her a top candidate for the job. As a Mahila Mate, she supervises 25 workers and is responsible for their work demands, daily attendance and other work-related assignments. In addition to earning a consistent income and encouraging other rural women to seek employment, Rajkumari is increasing her confidence as a leader and developing strong negotiation skills to demand more work for herself and those on her team. The program is designed in such a way that women can maintain their employment and engage with other MGNREGA work projects when their current assignments end.

Rajkumari has always wanted to provide a better life for her children, and the Mahila Mate program has provided her with the resources to do so. In just 50 days, she earned 20,000 rupees, or the wage of a semi-skilled worker.

“I am delighted that after all expenses required in my family and after returning the borrowed cash, I have saved some money,” Rajukumari said. “With subsequent payments from MGNREGA, I plan to purchase a [motorized scooter] to reduce dependency on my husband for visiting worksites. Commuting by myself will make me more independent. The opportunities created by Mahila Mate have brought a ray of hope and joy in my life.”

“[This program] helps give women their much-deserved status along with providing a livelihood.”

The impacts of the Mahila Mate program are already visible with increased demand for work from women in the program. The goal is to increase women’s participation in the workforce to 38 percent by March 2022 and to engage more women in income generation. The program is adopting campaign strategies and slogans such as ‘100 Days Work Guarantee’ to attract more participants and meet this goal. In Uttar Pradesh alone, a total of 21,370 women have received workforce training since September 2021.

“Mahila Mate helps give women their much-deserved status along with providing a livelihood. I feel proud to have been selected as a Mahila Mate and already other women of my SHG and my village are looking up to me,” said Sarita, a Mahila Mate from Suvanshipur village in Lucknow district. “Mahila Mate will not only help create safe space for women at MGNREGA worksites but will achieve gender balance in the workforce and will also help improve the health and education scenario in the community.”

Female participation in the labor pool is both a driving force and an outcome of the MGNREGA and Mahila Mate initiatives. By creating more women-led job sites that increase both the safety and comfort level of women employees, the program helps address longstanding societal barriers that have prevented or discouraged rural women from joining the workforce before. Benefits extend to the family and community level as well. Earning an income help elevate a woman’s position in the home and gives her greater decision-making power related to her family’s health, nutrition, hygiene and education. Greater participation of women in the workforce also leads to increased household incomes, which help families to escape the poverty cycle and boost the local economy. As Rajkumari and Sarita said, Mahala Mate is a ray of hope to many rural women, enlightening their lives, families and society as a whole.