Rallying Mothers to Lead the Charge against Child Marriage in India

Naima*—now one of the most outspoken advocates for girls’ rights in her community—did not have an easy childhood. She grew up in Bokaro—a vibrant, cosmopolitan city in northeastern India, famous for one of the largest steel plants in Asia and often referred to as the “City of Scholars” for serving as an academic hub of the East. Many say that education is the spirit of the city, but completing her studies was not written in Naima’s stars.

At the age of 15, shortly after finishing her 10th grade exams, Naima was forced to marry and move to the countryside with her newlywed husband and his family. It took her many years to adjust to the traditional way of rural life. She spent her days doing household chores and taking care of farm animals, and she remembers being particularly displeased when her mother-in-law would make her mold dung cakes for use as cooking fuel. “It was impossible for me,” she says. “I was not happy at all.”

A year after her wedding, Naima—still a child herself—gave birth to her first daughter Ramya. She faced enormous pressure to have more children and bear a baby boy, and ten years later she had her second daughter Nisha. Then, in 2005, she welcomed her son Ravi. The family eventually moved to Godda, a small town in the state of Jharkhand, in search for better education for their children. Naima’s husband became a construction worker and she started volunteering for the Jharkhand State Livelihood Promotion Society (JSLPS), a local government agency dedicated to eradicating poverty. As part of its mission, the Society supports grassroots organizations, including the women’s self-help group to which Naima belongs. It is through the Society and the self-help group that Naima met Sushmita Mukherjee, the Director for Gender and Adolescent Girls at Project Concern International (PCI) India. Soon after, Naima became one of the star activists of PCI’s signature program Umang. 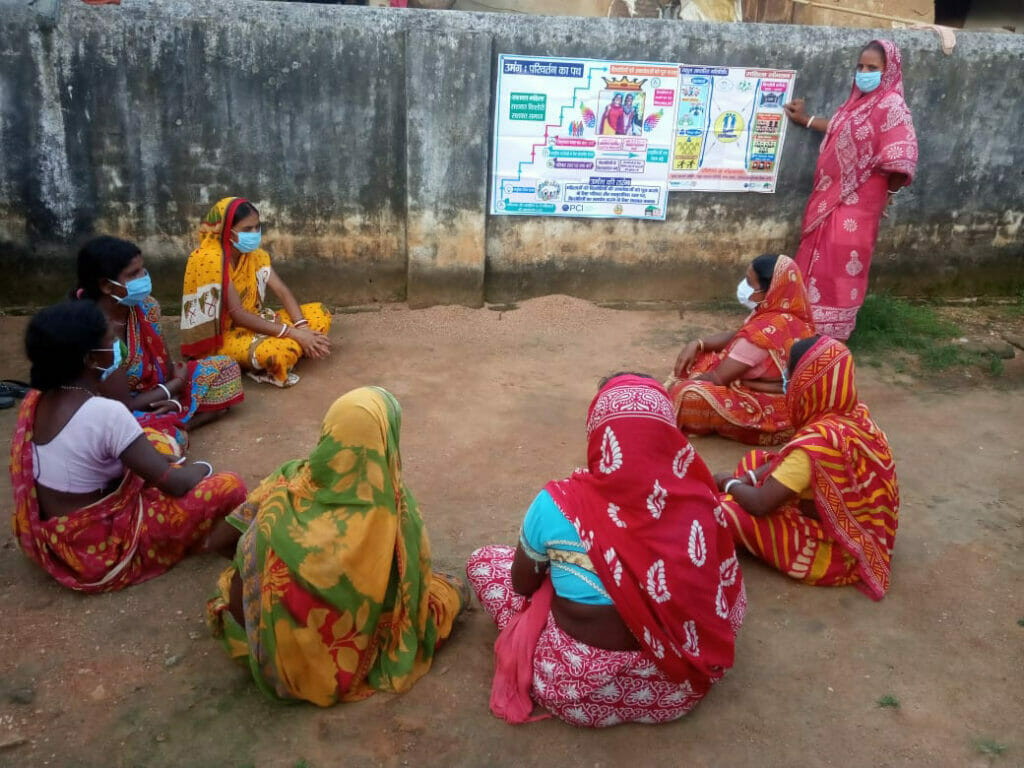 Umang, implemented in collaboration with the International Center for Research on Women, seeks to protect adolescent girls from child marriage and ensure that they complete their education. The program advocates for better policies at the local level and mobilizes members of women’s collectives, like Naima’s group, to speak up against early marriage in their families and communities.

“Child marriage is a reflection of strong patriarchal controls over the lives of women starting from a young age,” says Mukherjee, who directs the program. “It snatches away childhood and opportunities from the girls.”

PCI established Umang to bring a normative shift for the betterment of adolescent girls. Through the partnership with JSLPS, PCI is poised to galvanize more than 20,000 women members of self-help groups to lead the charge against child marriage in the Jamtara and Godda districts of the Jharkhand state by March 2023.

One of the key approaches of Umang is working with mothers who were once child brides themselves and have a deep understanding of the harmful effects of this practice on girls’ lives. According to Mukherjee, the role of mothers as community influencers is significant. “They know the pain and can be the critical voice for girls in their communities,” she says. “And they are eager to improve the lives of their daughters.”

In many ways, Naima is the embodiment of the program’s success. When her older daughter Ramya turned 17, Naima—pressured by her relatives and highly restrictive social norms—pushed her into marriage, which she deeply regrets. “She was very good in her studies, but I overlooked that,” she says. Now, after joining Umang and participating in a series of workshops about girls’ rights, she vows not to make the same mistake with her younger daughter Nisha. “I will allow her to study until she is interested, and I will delay her marriage,” Naima says. “I want her to be self-reliant.” 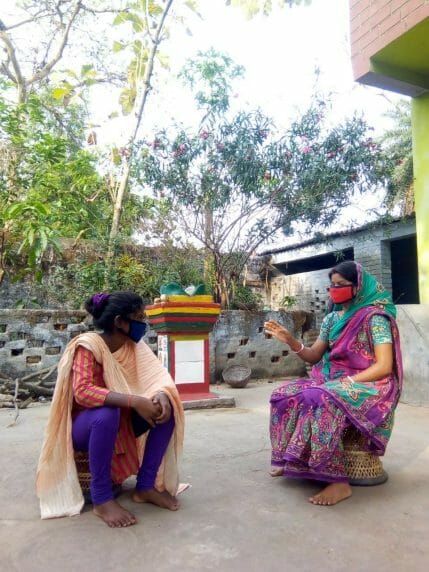 Throughout the pandemic, women and girls have faced a heightened risk of domestic violence and exploitation. In rural areas of Jharkand, India, PCI is supporting self-help group members to discuss these vulnerabilities with their daughters and neighbors to help prevent violence against women and girls during lockdown. (Photo by PCI/India staff)

Remarkably, Naima’s journey with Umang goes beyond her personal transformation. She has become an active, impassioned Umang advocate, and she prides herself in her ability to counsel, motivate, and uplift other women who are in a similar situation. She knows very well that ending child marriage is an uphill battle in a society which sees daughters as liabilities rather than individuals with voice, choice, and agency. Although child marriage is illegal in India and parents can face imprisonment for allowing unions that violate the Prohibition of Child Marriage Act, many families feel they are left with no choice. They worry about livelihoods, bridal dowry demands (which increase by age), and their daughters’ safety. And they fear societal stigma for deviating from traditional norms and expectations.

Even Naima’s husband, who supports her efforts and wants their daughter Nisha to study and get a good job, is adamant about marrying her off if she gets into trouble or strays from her path. “Marriage of daughters is a normal course of life,” he says. “No one can bear bad name or social exclusion.”

Nisha is aware of these pressures, too, and is studying very hard to become a police officer. “Marriage cannot be avoided,” she says. “I just want to become self-dependent before getting married. I want to have the freedom of mobility and life decisions.”

Despite all these obstacles, Naima is not losing faith. She is dedicated to raising awareness and sensitizing people about child marriage, its causes, and devastating consequences.

Naima’s story is not isolated. India has the highest absolute number of women married before the age of 18 in the world, with an estimated 1.5 million underage girls forced into marriage each year. In the district of Godda, where Naima lives, more than 60% of girls and 30% of boys are believed to wed before the minimum legal age of 18 and 21, respectively.

According to the UNICEF Executive Director Henrietta Fore, the COVID-19 pandemic has made this situation even worse for millions of girls around the world. “Shuttered schools, isolation from friends and support networks, and rising poverty have added fuel to a fire the world was already struggling to put out,” she says. Parents are scrambling to feed their kids, and many are desperate to marry their girls off. After all, the practice is rooted not only in patriarchy, but also in the volatility of life.

Umang means happiness and enthusiasm in Hindi. Strong and powerful community leaders like Naima remind us every day that bringing back joy to girls’ lives and helping them fulfill their full potential can change the world, one mother and one daughter at a time.

*All names have been changed to protect the privacy of PCI program participants.