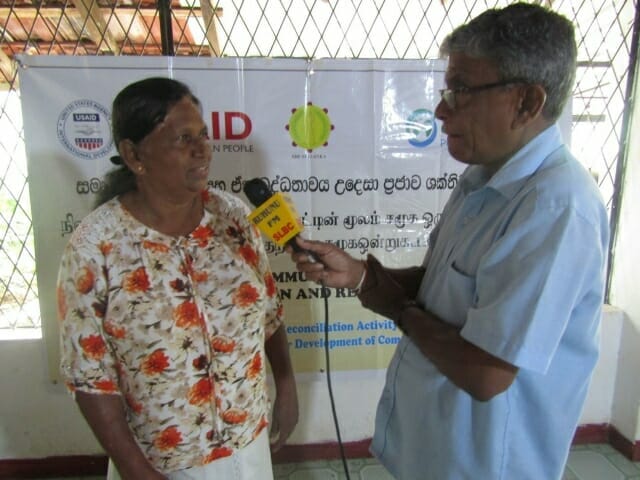 Many agree that suspicion and cynicism against the Muslim community in Sri Lanka existed for some time alongside the larger ethnic tensions between Sinhalese and Tamils caused by the 30-year civil war. Competition on socio-economic gains, land issues – especially in the North and East – and the general lack of social cohesion between communities were some of the factors leading to longstanding conflict. Following the coordinated attacks by a terrorist group on Easter Sunday last year, hostility of extreme nationalists against the Muslim community became much more severe and led to widespread  hate speech, both  online and offline. These destructive acts led to a boycott of Muslim-owned businesses and even vandalism in some parts of the country. (Southern Sri Lanka has a Sinhala majority where anti-Muslim rhetoric was high especially in the aftermath of the Easter attacks.)

Jazail Moulavi, a Muslim trader of printed material living in the South, says that his community was discriminated against at a railway station in the Southern Province, where he and other Muslim businessmen were charged more to transport printed books to Colombo and Kurunegala after the Easter attacks. He says that while this was due to the general hostility built up against his community, the station justified the price hike by saying it was due to goods classification policies. Moulavi ended up making the additional payments (which he did not have to pay earlier) as he wanted to transport his goods on time. He paid the higher price for about a year when he happened to listen to a legal aid discussion on the radio which made him think twice.

“I heard a discussion on the radio in June 2020 and thought I should take some action,” Moulavi said, referring to the radio program discussing the USAID-funded Social Cohesion and Reconciliation project, implemented by Global Communities. “I heard the legal experts talking about the Right to Information Act (RTI) where a citizen could get government information. I called the radio and presented my problem to them. They gave me a lot of advice and then I started to act.”

The legal clinic on Ruhunu Radio was conducted by the Legal Aid Commission with the support of the District and Divisional Secretariats facilitated by the Saviya Development Foundation under a SCORE grant where citizens were made aware of their rights, how to obtain information, and where to go for redress. It promoted social cohesion and reconciliation by creating awareness on citizen rights and transitional justice aiming to mobilize communities to overcome challenges in this regard.

In this instance, Moulavi was made aware of his right to information and how to make an official inquiry with the relevant Station Master under the RTI. Accordingly, he obtained the information on the prices to transport goods from the Maradana (Colombo) railway head office which was copied to the station in the South. Thereafter, Moulavi was able to discuss with the Station Master in question who accepted fault and charges were then re-levied at appropriate rates. This way, Moulavi was able to raise his voice against an injustice through the SCORE-supported activity.

“I appreciate that such a program was conducted on Ruhunu Radio. We got the legal instructions and got the right solution to our problem. Earlier, we were treated unfairly. We were discriminated against. But we are now on friendly terms with the railway officials. We are grateful to SCORE,” Moulavi said.