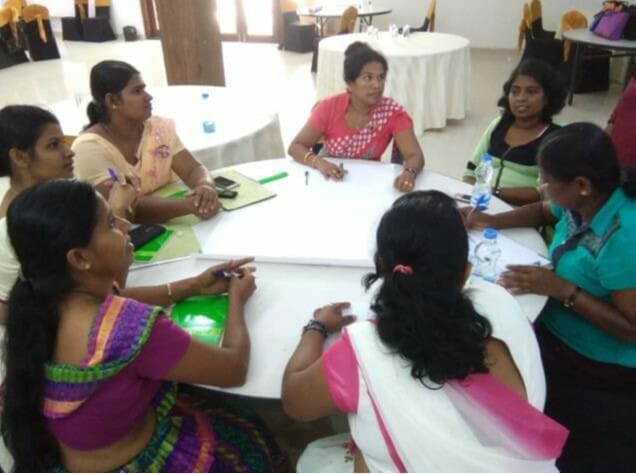 Before Covid-19 hit Sri Lanka, long queues were the usual scene at hospitals, and patients had to wait a long time to get medicine. Such was the case at the Vavuniya General Hospital as Samantha Sebanesarani, an Urban Councilor recalls, when she went for checkups. Additionally, the pharmacy closes during lunch time without anyone being allocated to distribute medicines and patients had to wait till the pharmacy reopened after lunch. For many years Sebanesarani put up with these inconveniences, until she attended trainings conducted by the Association for War Affected Women (AWAW) under USAID’s Social Cohesion and Reconciliation Activity (SCORE) project, implemented by Global Communities. It was then that she realized she could change the situation.

“As a result of this lack of efficiency, queues got longer and patients got tired. The patients were exposed to contracting more diseases too,” she said.

Sebanesarani was a concerned citizen, but she did not know how to speak out or whether she would be heard, until she attended AWAW trainings under SCORE on advocacy and leadership last year.

“I attended a series of trainings that provided women like me, who are already in leadership roles in local government, with in-depth knowledge of Sri Lankan laws such as the Right to Information Act (RTI). Such knowledge helped me sharpen my skills to take a stand. We women have the power to make a change,” Sebanesarani added. “I got the information from the GMOA on break times through the RTI and made the petition to them to allocate staff to the hospital pharmacy on shift basis. The petition was directed to the hospital authorities and they addressed my concerns,” Sebanesarani said.

She managed to garner support at her Urban Council and hand over the petition to the Government Medical Officers Association (GMOA). Her advocacy was successful. Later at the hospital, authorities allocated staff to the pharmacy on shift basis so that it remains open during the lunch time too. Sebanesarani’s advocacy resulted in the provision of more efficient services for patients.

The AWAW, last year with SCORE, provided training and sharpened the leadership skills of 323 women, including politicians and others from multi-ethnic and multi-religious communities, to strengthen good governance and democracy. The aim of the SCORE-AWAW activities was to increase women’s participation in peace and reconciliation processes, provide informed opinions on communal issues at political platforms while reinforcing relationships across divides; be it ethnic, religious or party politics. The trainings were on transitional justice, political leadership, and advocacy. Most participants were war widows and women heading households. AWAW groomed women to be better leaders with more knowledge on how to identify and resolve community issues and what laws are applicable such as RTI, CEDAW and UNSCR 1325.

At the end of the training, women pledged to carry out advocacy work in their villages with the knowledge and skills they gained from the training, and to use their newly acquired knowledge to address significant societal issues in their respective capacities.

Nayani Wijeratna of Warapola, with her training on transitional justice mechanisms, worked to connect some of the families whose loved ones who had disappeared with the Office of the Missing Persons in Colombo. The families had not known before that this office would provide some sort of redress to their grief by way of compensation or information on how to obtain death certificates etc. In order to create more awareness in this regard, Wijeratna also initiated to plant trees in Warakapola town last year in memory of war victims. In addition, due to the AWAW transitional justice training, another participant – Padmini Jayasinghe of Habaraduwa Pradeshiya Sabha (PS), Galle – submitted and got approval from her PS to allocate a significant budget to uplift livelihoods of war affected mothers and wives. Another participant, Champika Niranjali, a member of the Niyagama PS in the North Central Province, initiated a project on home gardening for marginalized women heading households in her area. She facilitated a training for nearly 270 women farmers to promote cultivation without pesticides use. She first got connected to these women after the AWAW visit to the area to meet women farmers. These were just a few of the individual AWAW-inspired activities.

AWAW at the end of the training program also carried out an advocacy campaign in 25 locations countrywide with the participation of the trainees to promote ethnic and religious harmony. The campaign included pasting stickers on public transportation with the message ‘We stand united for our country,’ And public meetings were held with the support of the police to spread the message of peace.

AWAW, through SCORE, championed women as agents of change and strengthened local government through women political leaders who became stronger to provide sustainable services to marginalized communities. Opportunities were increased through capacity and knowledge building for women to exercise leadership in promoting responsible citizenship and reconciliation which further enhances community resilience.