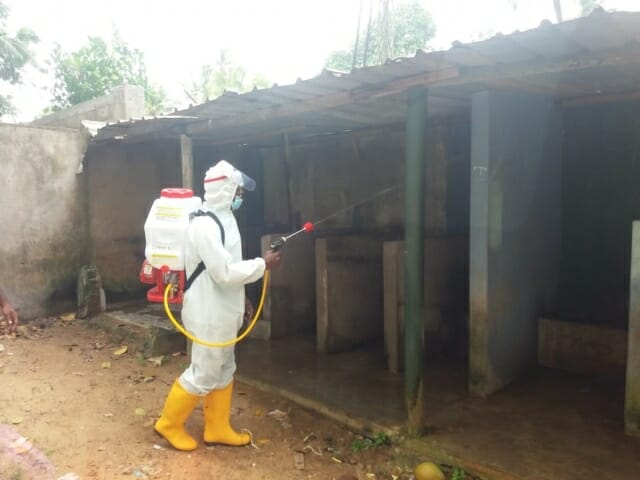 A public school in Gintota in the South of Sri Lanka is one of the schools that benefitted from USAID Social Cohesion and Reconciliation Activity (SCORE)’s COVID-19 island-wide response in mid-August. The school authorities struggled to clean and disinfect their premises due to lack of equipment and trained personnel until SCORE stepped in. Earlier in June, they had also received a letter from the Southern Province health authorities warning them of another deadly disease – dengue – that was found in their school.

“The authorities instructed us to clean our school premises as they had identified dengue breeding sites inside. Although we clean our school premises daily, we did not have the equipment or the capacity to carry out thorough disinfection. SCORE’s donations came as a blessing as we knew this equipment could be used in the future too for dengue cleanups,” said the school’s Deputy Principal.

The school has nearly 1,900 pupils – both girls and boys – who could potentially be exposed to the deadly dengue virus as another rainy season begins. Since the first SCORE-supported COVID-19 disinfection completed on August 9, the school continues to use the equipment and trained laborers daily to clean their premises. Earlier, the school relied on the health authorities to carry out fogging in the event of dengue cases reported in the area. Now the school has its own trained laborers and equipment, including the power sprayers and protective gear donated by SCORE, to make the school safe for the children.

“The gloves and boots are used for cleaning school washrooms and protecting the workers against exposure to infections,” the Deputy Principal said. “Even the eyewear is used to mow the school garden, helping workers to engage in the task safely. Earlier, they did not use any of this protective gear. We use the garbage bins provided by SCORE to properly dispose waste safely, as we had a small bin for glass items earlier, which was insufficient and not very safe for garbage handlers,” said the Deputy Principal.

SCORE’s COVID-19 immediate response implemented by Global Communities has thus brought long-term benefits to communities by supporting them to keep their environs clean and their people healthy.