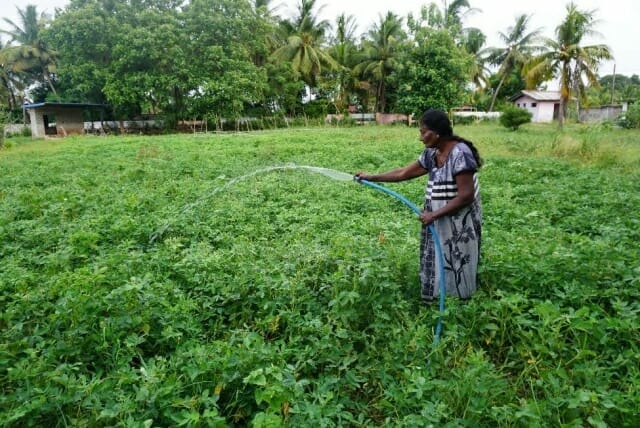 N. Sridevi, a single mother of two from Maharambaikulam in the conflict-affected Vavuniya district in the North of Sri Lanka, had been concerned over the area’s drinking water for many years. The people in the North and North Central Provinces have been experiencing high levels of Chronic Kidney Disease (CKD) for the last decade, and they believe the region’s polluted groundwater is the cause, although this has not yet been scientifically proven. Sridevi is still fearful of drinking groundwater, especially for her children.

“There is a common belief among our villagers that the region’s water is contaminated and causes kidney diseases. So, we purchase water bottles from the town 2 km away at high costs,” she said.

Seventeen percent of the families in the Vavuniya district have at least one family member with CKD, according to research. Of those, 150 people from the 2,000 families in the multi-ethnic Maharambaikulam are receiving treatment for CKD. Researchers do not point the finger directly to groundwater contamination but rather indicate many contributing factors for kidney ailments, such as too little water consumption due to fear over safe water, improper practices in food handling, etc.

CKD is not only a health issue but an economic issue, especially for the marginalized communities in this part of the country. Increasing patient numbers mean less economic participation, resulting in low income for families with kidney patients.

As such, it brought great relief to the Maharambaikulam community when USAID’s Social Cohesion and Reconciliation Activity (SCORE) implemented by Global Communities, with the local partner Rural Development Foundation (RDF), set up a water purification plant in the village to provide drinking water to villagers at a low cost. Villagers could now set aside their fears and consume water for less expense and hassle than the water purchased from town.

The plant was opened in October 2019 with the community also participating in the cleanup of the premises. After almost a year, the plant still provides clean water at a low cost and the villagers are united in their gratitude to USAID SCORE. The government-established Coexistence Society of Maharambaikulam ensures the running of the plant and uses the income from bottled water sales for maintenance.

“Villagers can now get clean water at a low price from the plant without any fear. We identified that this plant is also an opportunity for the multi-ethnic and multi-religious community members to build friendships while they gather to get water,” said Coexistence Society President, A. Mohamed Faizer.

In addition, the plant provides daily drinking water to the school without charge. During the COVID-19 lockdown earlier this year, the plant was a valuable asset to the village as shops were closed and villagers were unable to purchase bottled water. As a result, there was an increase in the people who came to get water from this plant. In addition, the waste water from the plant is used in home gardens and some residents provide excess vegetables to the school canteen.

Now there is improved access for the villagers to a basic necessity – water. The USAID SCORE support also helped to increase friendships between the community and the Coexistence Society, building stronger networks among them, enabling further social cohesion.