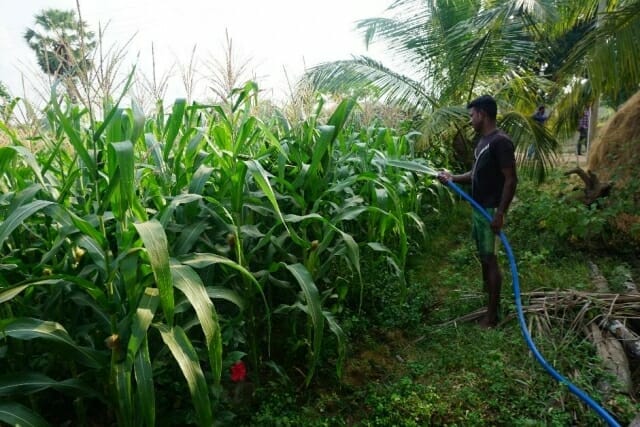 Tamil and Sinhala villages of Aathiyammankerni and Samagipura in the Trincomalee district have been directly affected by the country’s 30-year conflict that continues to inflame tensions between the two communities. Tensions were aggravated further in 2006 when the LTTE blocked the Mavil Aru sluicegates that brought water to thousands in these villages through the waterways. This blockage also resulted in military action commencing from these areas, along with many reports of missing persons from the region, as well as persons who need psychological and livelihood support.

Ever since then, it has  often seemed impossible for Aathiyammankerni and Samagipura communities to strengthen relations. The Sinhala community avoided the Tamil community altogether, and  agriculture practices suffered on both sides, as it was not possible for the communities to reach an agreement to repair the irrigation channel that brought water to their fields. The 5.2 km channel was heavily damaged and partly covered with earth at the Aathiyammankerni side, resulting in floods during rainy seasons, especially because it is a low-lying village. The difficulties forced  many families during the rainy season to seek shelter in schools that are further away from  floods.  Yet, for nearly 25 years, the Tamil community suffered and could not come to an agreement or compromise with the Samagipura villagers to repair the irrigation channel together, even though they made several attempts to reach out. Samagipura villagers did not want to give up land – some of which was allegedly encroached upon – for the channel, as restoration required the acquisition of parts of land on either side.

USAID-funded Social Cohesion and Reconciliation Activity (SCORE) implemented by Global Communities with its local partner, Trinco Aid, and the area’s government-established Coexistence Society, recognized these tensions and the challenges they caused, and saw the opportunity to bring them together through the channel renovation. After many discussions with both communities, separately and together, the two villages finally reached an agreement to repair the channel together as it benefitted both parties in uplifting their livelihoods. With continued discussions facilitated by Trinco Aid, Samagipura villagers agreed to work together for the cleanup and repairing. Communities that once looked away began interacting and realizing that harboring hatred doesn’t benefit anyone.

Now that the restoration is complete, both communities yield better harvests as the channel is used to its full capacity. More lands are being cultivated year-round on both sides of 250 acres, which was not possible before. Villagers cultivate additional crops during the off-season, which allows them to earn an added income and benefits their livestock too. But most of all, tensions between once hostile communities have eased.

“We are now cultivating paddy in 40 more acres. We didn’t face any floods during the last rainy season. Relations between Sinhala and Tamil communities have improved. We are grateful for SCORE for supporting our villages,” said Farmer Organization Secretary Thangavel Rajmohan.

Through the single act of channel repairing, SCORE enabled a conducive environment for peace. SCORE seized an opportunity to further social cohesion and reconciliation, and succeeded in in transforming mindsets that rigidly sought separation prior to the intervention.

Read more about our work in Sri Lanka.