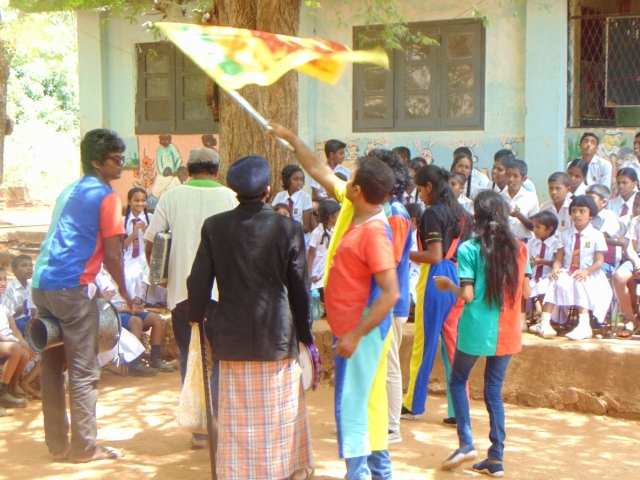 Exploring themes of religious freedom and mutual respect among communities, the performances, which took place earlier this month, were performed by the Nirupana Art Forum and organized with the support of the National Integration Promotion Assistant in Wellawaya who is responsible for coordinating Ministry work at the field level.
The theater group performed before an audience of 450 multi-ethnic students and teachers of the Janasanka School in Mahagodayaya and the Dutugemunu College in Buttala, challengeing them to cultivate a deeper understanding and acceptance of other ethnicities and religions.

Engaging with the audiences, the actors conveyed the idea that in order to protect oneself, an individual does not have to cause harm to others, encouraging critical thinking among students on how to conduct themselves in their communities under the current ethnic tensions. Also depicted through drama was the theme of interreligious tolerance and understanding among religious communities, dispelling various misconceptions held about Muslim communities and their religious practices, particularly concerning women’s access and participation in mosques.
The goal behind using street drama and theatre to foster reconciliation and social cohesion is that it acts as a tool for reflection and communication, transforming attitudes and bringing about greater understanding among students and their wider communities. SCORE supports the strengthening of such community-driven initiatives aimed at promoting social cohesion and reconciliation and the constructive engagement of multi-ethnic communities in reconciliation processes.