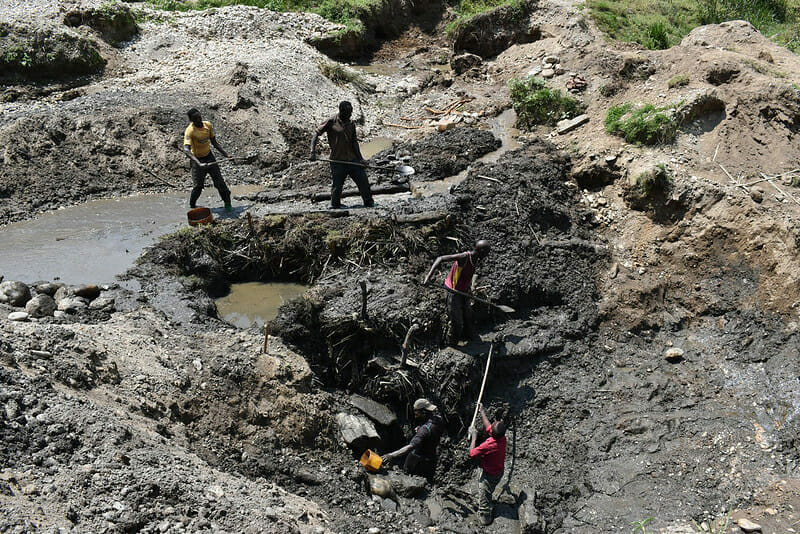 The banks of the Ituri River are teeming with men and women searching for gold. For many of these individuals, artisanal mining is inherent, a livelihood passed down from generation to generation. For Aristote*, who has limited education and qualifications, it is a means of survival.

Gold has been mined in the Djugu territory of Ituri province for generations. The Government of DRC created its own mining operations and then invited foreign investors to mine here. Artisanal and small-scale miners, like Aristote, also arrived in hopes of finding the precious metal. The government gradually nationalized the gold industry in the province, and mining became regulated by national law.

Aristote and his group organized themselves into a cooperative, as required by the Congolese law. They identified a mine and started digging.

“A discovery leads to a frenzied dance, but there are so many people down the chain to settle,” Aristote said. “We do not just discover gold, sell it and pocket the money. We settle with the owner of the mine, the middlemen and sometimes a militia group controlling the area. It has now been 25 years, and I have no savings.”

Despite their love for searching for gold, Aristote and the cooperative have had increasing difficulty covering expenses for the basic needs of their families. The unpredictable nature of activities on the mine constrains them to a hand-to-mouth existence.

“Our biggest challenge is the high interest we pay the mine owners. We give them 40 percent of production, added to other expenses, leaving us with roughly $2.50 per day,” Aristote said.

The U.S. Agency for International Development (USAID), in partnership with Global Communities and Levin Sources, launched USAID’s Zahabu Safi (Clean Gold) Project to help the Government of the Democratic Republic of the Congo (DRC) in its effort to formalize the artisanal and small-scale mining (ASM) sector and attract ethically conscious jewelers.

This constant struggle to make ends meet is enough to drive some miners to crime. However, to avert this issue, the team of USAID’s Zahabu Safi (Clean Gold) Project facilitated an agreement between the cooperative and the mine owner.

In a historic move, the project convinced the mine owner to charge the artisanal miners just 5 percent of production, rather than 30 or 40 percent like on other properties. The reasoning was that if returns to miners improve through effective cooperative structures, then commercially viable investments in ASM gold supply chains by private sector supply chain actors will also increase.

“The news of the outcome came to us as a surprise,” Aristote said.

“It is the first time in the history of our country that a mine owner has agreed to take just 5 percent. It’s as good as stumbling upon an unexpected gold deposit.”

The landmark agreement is a significant step in legalizing the activities taking place on the Djugu property by artisanal miners. For context, war spread throughout the region between 1998 and 2003. Uganda, which occupied Ituri province for part of that time, took much of the gold in the area. As a result, it is common for mining areas to be controlled by armed groups that operate throughout this region, often with the aim of controlling geographic areas or natural resources. Therefore, legalizing the activities of artisanal miners is critical to attaining a conflict-free reputation on the international market.

“As a group, we want security, which in turn will increase business opportunities,” Aristote said. “This type of agreement is an effective way of managing the low respect for legal frameworks in the mining sector in DRC. If responsible gold buyers from Northern America and Europe are convinced that gold from this Djugu site is conflict-free, they will be motivated to buy and invest in it.”

Aristote echoes the sentiments of many within the cooperative who are eager to escape poverty, despite years, if not decades, of artisanal mining.

“I feel excellent now being a miner. If my revenue increases by 35 percent, I can send $50 each week from my earnings to my wife and four children,” he said. “Our daughter can return to school.”

While not a solution to all the challenges faced by artisanal and small-scale miners, the knowledge and support the group has gained from USAID’s Zahabu Safi (Clean Gold) Project and its partners has significantly improved their livelihood prospects, and they continue to build on the support they have received.

Today, USAID’s Zahabu Safi (Clean Gold) Project has led to the involvement of jewelers and refiners through its community of practice. In view of targeted international “clean gold” export by 2022, the project has signed a memorandum of understanding with a New Mexico-based jeweler, and with a responsible artisanal gold trading company registered in the United States and DRC.

Published 03/29/2022 by Global Communities in Blog, Africa, Democratic Republic of the Congo