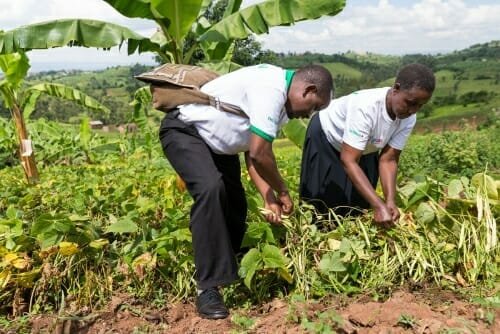 The UN’s first Sustainable Development Goal is to “end poverty in all its forms everywhere” by 2030. The UN measures extreme poverty in financial terms – the 836 million people who live on less than $1.25 a day.
This way of measuring poverty is simple and convenient, and forms the basis by which most global development organizations now categorize poverty. But while it is simple and convenient, it belies a complex reality of human behavior and incentives that we need to understand if we are to help people rise sustainably and inclusively out of poverty. And while in the global north we often think in terms of market incentives and economic definitions of poverty, when we come to design development programs, unless we consider human behavior and incentives, we may find our way of thinking gets in the way of success.

For example, in 2013 as part of a program financed by USAID to support the creation of farmer cooperatives in Uganda, Global Communities partnered with Birmingham Southern College to help assess what made individuals in the community of Bushenyi willing to cooperate with one another. We anticipated that economic factors would be the main driver for individual farmers to band together in co-ops. After all, farmer co-ops are primarily a business venture designed to improve incomes. We expected that any social benefits of cooperation would simply be an added bonus to the increased income.

However, the Ugandan farmers had a different set of priorities. The initial survey found that economic benefits did not have a statistically significant effect on a farmer’s willingness to join a cooperative. Instead, it was the social benefits that were the primary drivers of the farmers seeking to form co-ops. In the northern Ugandan community of Lira, which had a history of conflict with the Lord’s Resistance Army, we anticipated that violence would have weakened social ties and negatively affected the desire to cooperate. A study of these participants indicated that, once again, social benefits were the single-most important driver for joining cooperatives.

What are these social benefits? For the Ugandan farmers, social benefits were defined as giving and receiving emotional support, meeting others who can provide help in times of need, and meeting others with whom to socialize. The farmers also sought to meet people with access to tangible goods, like tools and equipment, as well as intangible goods like knowledge and skills to help them meet other needs. And while social benefits were the primary motivator for individuals to join co-ops, participants did see their income rise, and saw them rise further after each harvest they collectively marketed. Forming cooperatives did help reduce poverty, but that was not why they formed them.

This research is not alone; there is a growing body of research into behavioral design in global development that considers the importance of human behavior and behavior-related incentives in developing policy and program design. Programs that do not take human behavior into account very often fail. For example, mosquito nets have become used for fishing, endangering fish stocks and failing to stop  malaria, and play water pumps notoriously failed because the way children play did not match the requirements of many hours of continuous play for the pumps to work. So when we consider how to reduce poverty, we first need to understand the human behavior of the communities with whom we work, and build appropriate incentives into our programming to ensure that poverty-reduction programs are sustainable.

We are continuing our research and believe it deserves testing in other environments. If social capital broadly outweighs financial capital as a behavioral driver it represents inherent resilience-seeking behavior. And with the growth in climate-related and other disasters worldwide today, we should learn from community members themselves how to help build resilient social networks as an outcome that is a good in and of itself, such as those that have been highlighted by the Rockefeller Foundation’s Global Resilience Partnership.

It should not be surprising that Ugandan farmers have different thoughts on what is important to them than we might assume. Understanding why certain behaviors are formed is essential, as is understanding what incentives to build into program design. If we only consider market-based thinking, economic growth will be neither inclusive nor sustainable.