World Humanitarian Day: Beyond the Headlines 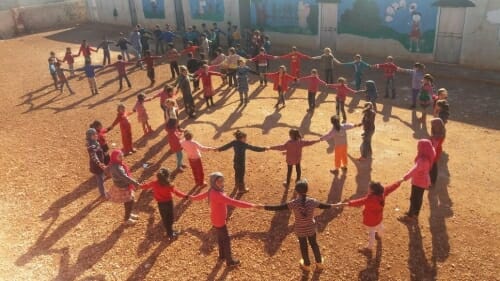 World Humanitarian Day: Beyond the Headlines
This article originally appeared on Medium

What are the needs in a complex, intractable conflict like Syria? On World Humanitarian Day, Global Communities reflects on some of the needs that conflict-affected populations have in Syria that are not covered in the news. Beyond the immediate essentials of food, medicine, water and shelter, there are millions of Syrians seeking to support their families in a time of instability and danger. Global Communities is assisting displaced people and host communities across the region in the following ways.

Agriculture
As the conflict in Syria continues deep into its sixth year, the response to the ongoing humanitarian crisis must begin to shift away from only focusing on the immediate needs of those on the ground and begin to think about resilience. One of the best ways to accomplish this is through agriculture, traditionally an extremely important part of the Syrian economy, especially in affected regions.

Global Communities’ work focuses on distributing livestock, rehabilitating community level agricultural infrastructure and providing vital supplies that, prior to the conflict, were often only available from the central government. In the areas where we work, 7,451 farmers have received agricultural kits designed to assist in these sectors. In our experience these kits cost about $300 and help produce approximately $1,200 in foodstuffs, nearly a 400% return on investment. This support not only provides significant food for families, it helps create and sustain local markets and ultimately livelihoods, even in chaotic environments like displaced persons camps.

Investments like these are helping move away from short-term solutions like food baskets and setting the foundation for long-term recovery and resiliency that will be critical in the years to come. Read more on Reuters.

Disaster Risk Reduction
In regions burdened by conflict like Syria, the risk from disasters is increased. In particular, fires have become a persistent threat, caused by human actions such as burning fields, improper trash disposal, and airstrikes. These fires wreak havoc in rural areas, threatening people, livestock, and land that are vital to communities’ livelihoods. Being able to respond and help prevent these fires is an emerging and necessary part of our humanitarian response in Syria.

We are leading a disaster risk reduction intervention to help Syrians prevent and reduce fire-related disasters through early warning systems and other responses. This entails rehabilitating infrastructure, organizing the efforts of volunteer responders and improving risk mitigation measures for farmers. Such improvements were recommended and implemented following a detailed assessment on how agriculture was affected by fires in 2015. We coordinate and communicate with on-the-ground volunteers and staff, farmer unions and local councils in each location to ensure that the community understands their role and contributes to the mitigation and response plans. This close collaboration also helps ensure timely, accurate collection of information about fire incidents and the estimation of losses (land, livestock, crops, etc.), and allows us to adjust plans to ensure that each geographic area has the support and resources it needs. Coordinated fire response helps communities save money, resources, and ultimately lives.

Protection of Women and Children
Protection of vulnerable populations, such as children and women, is a central component to any humanitarian response. In a crisis these populations are more likely to be affected on the whole, being more likely to be malnourished or lack important medical care, and are also subject to a host of unique threats, from recruitment as child soldiers to gender-based violence. Two especially important areas are psychosocial support and Child-Friendly Spaces. For many young people in camps, permanent schools are not an option, and the continued disruption to their lives can leave lasting scars.

To help address these needs, Global Communities supports six Child-Friendly Spaces, a youth center, three mobile teams, a psychological first aid team, and reaches six schools. Child-Friendly Spaces are safe places within a disaster-affected community where children’s unique needs can be met. They help children return to a normal routine by offering structured activities, games and informal education. We are regularly working with over 2,000 children, building their capacities through the psychosocial support activities that we provide in our centers. By helping them understand their identities, their relationships with the adults in their lives and their relatives, their emotions and how to deal with them, these children can have an easier time thinking about the future and building relationships with the community.

Rehabilitating Critical Camp Infrastructure
As populations flee from fighting, camps begin to evolve to support the displaced families. While we often think of these camps as a central location for the distribution of basics like food, medicine, and shelter, as the camps grow, infrastructure becomes increasingly important — much like a small city. Concentrated numbers of people will strain sanitary, electrical, and transportation networks, creating unsafe environments that are detrimental to overall health. Humanitarian efforts have to take these concerns into account.

Global Communities’ team in Syria just completed an important project in one camp: graveling over 16 miles of roads and rehabilitating drainage along it. These improvements not only increase mobility for camp residents, but also enable the delivery of life-saving services such as water trucking — of which we provide roughly 340 trips daily — and latrine cleaning, particularly in the winter months. The graveling and improvements to drainage also reduce standing water in camp, diminishing the threats from related diseases and improving the general environmental health. In addition, they installed 44 new water tanks in camps to increase water security for camp residents and ensure that all beneficiaries have equal access to safe and hygienic public water storage.

Supporting Irrigation to Restore Livelihoods
Irrigation systems in Syria are often communal systems in which multiple farmers draw upon one water source. Therefore, these irrigation systems are fundamental to farming communities’ overall health and well-being, and damage to them can cause immense harm and amplify community strife. Prior to the conflict, these canals were cleaned and maintained by the central government through the collection taxes, a process that has obviously not continued in conflict zones.

To help address this issue, Global Communities worked with local authorities in affected regions to clean and repair irrigation systems. Utilizing local labor to provide valuable jobs to the local community, so far more than 18 miles of canals have rehabilitated and cleaned, and more than 2000 farmers have access to irrigation. By repairing the irrigation systems and simultaneously helping farmers to re-start livelihoods activities through having access to water for their crops, we anticipate that they will have sufficient income after one initial planting season to be able to continue farming and recommence maintenance of the irrigation canals.