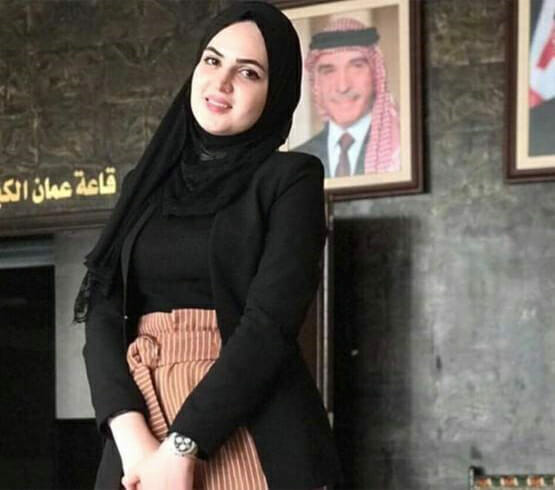 Young woman uses her education to empower youth to be involved in decision-making processes.

Marah Bani Nasr, 25, holds a degree in Law from University of Yarmouk in Irbid. Marah has practiced law for nearly two years, specializing in Statute and Sharia Law. Though in her community in Ajloun studying Law is not typically favored for women, with the support of her family, she decided to breach the stereotype and become a lawyer anyway. Alongside her work and education, Marah is a youth and human rights activist and has previously participated in many local and international settings, and she has represented Jordanian youth in several countries.

Marah was one of the first youth who joined USAID YouthPower back in 2017, when she joined in transformational learning activities and became one of the youth leaders in her community. Our empowered young friend also became one of the youth members of USAID Volunteer Ambassador Network and trained youth on the National Youth Strategy (2019–2025). After many achievements in the program, Marah entered a challenging period where she struggled with managing her time between the internship and examinations required for attaining membership in the Jordan Bar Association, and her volunteer journey.

“I can now clearly imagine myself as a legal awareness activist and review laws impacting the lives of youth and communities; locally, regionally and internationally.”

Earlier this year, together with a diverse young team of university students, graduates and others, Marah led a community engagement initiative titled Qarrari – ‘My Call’ in English – which aims to conduct a legal review of the Decentralization Law and develop a set of recommendations from the youth perspective. This law governs elections and the powers of newly created provincial governments. The young lawyer played a vital role in leading the initiative. Said Marha: “With no past experience, at first I was doubtful of my ability to conduct a legal review of a law, but with the support and motivation of the team, I was able to overcome my fear and seize the opportunity!” Her team drafted a number of invaluable recommendations responding to how the law takes youth into account and activates their role in society. Marah recently spoke at the USAID quarterly review and said: “This experience developed my legal knowledge and raised my awareness on local laws that directly impact our lives as youth and local community. I can now imagine myself as a legal awareness activist, both locally and internationally.”

With nearly two-thirds of the population under the age of 30, Jordan’s economic stability and security depends on the active participation of youth like Marah. USAID YouthPower continues to provide support and motivate youth-driven initiatives to breach boundaries and engage with their communities’ needs productively with the agency to advocate for themselves and properly overcome any obstacles coming their way.