Youth with Disability Transformed into an Enabler 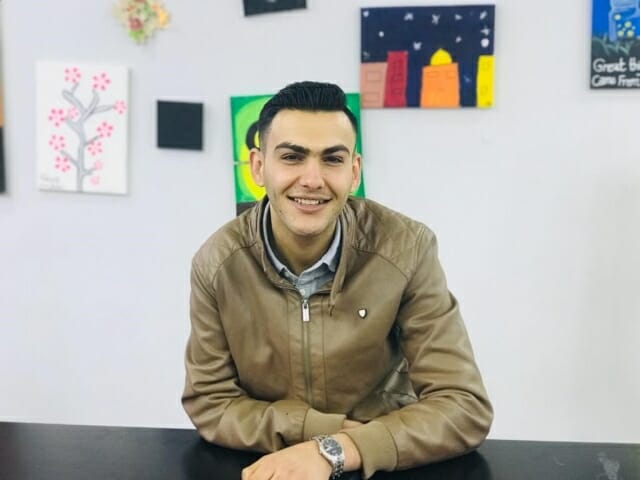 In the city of Shoonah Janoobiyah, to the west of the capital, resides Issa Abu Dhefalla, 22. He faced a life-changing dilemma at a very young age, when he had to choose between taking care of his sick mother or preparing for his senior year at high school. He chose the latter option but stayed beside his mother until her last breath.

Though Issa remained strong through this tragic event, he noticed that he had allowed his physical disability affecting his arm to turn him into a shy and invisible person in the community. “I suddenly found myself standing in the same spot for years and not even one step further, as I went from hiding my disabled arm to hiding myself,” Issa said. One day his sister encouraged him to join her at a training on life skills. After throrough consideration, he finally chose to breach the walls he built around himself and decided to explore his role in the community.

“I have facilitated training sessions in communities other than my own and my goal is to become a renowned trainer who inspires youth to breach the barriers and become who they aspire to be.”
—Issa Abu Dhefalla. Youth Trainer at USAID YouthPower

Fast forward to January 2021, when Issa came across USAID YouthPower at the Princess Basma Center for Development. Once Issa became acquainted with the program’s learning activities and opportunities, he joined the Training the Facilitators training where he developed interpersonal, leadership and training skills. It didn’t take Issa much time to become a USAID YouthPower certified youth trainer; to date he has already facilitated three training workshops and engaged 48 youth from different communities.

With a newly grown passion for training, Issa didn’t only manage to overcome his shyness and tendency to hide his arm in public; instead he became known for his interactive learning methods through making use of physical activities, ice breakers and games. The young champion also used the skills he gained to engage his peers in practicum activities that focus on personal growth and social inclusion via highlighting the importance of self-appreciation, solidarity, friendship, and elimination of all forms of discrimination and violence.

“To me, the most inspiring part of our curriculum is the ‘Who am I?’ session as it reminds me of the importance of regularly pausing and scanning my life. I would not have made it here if it weren’t for self-reflection,” Issa said.
Issa’s commitment and hard work is already paying off; he is now feeling empowered and has confidently melted his shyness away and started using his story to inspire others to become active. He acknowledges that his experience and the skills he gained have helped him discover his passion and build his own track to becoming a regionally known trainer.

USAID YouthPower continues to empower and motivate youth like Issa to become engaged citizens and productive members of society with the agency to overcome obstacles and grow into qualified individuals, and catalysts for positive change in their lives and in their communities.