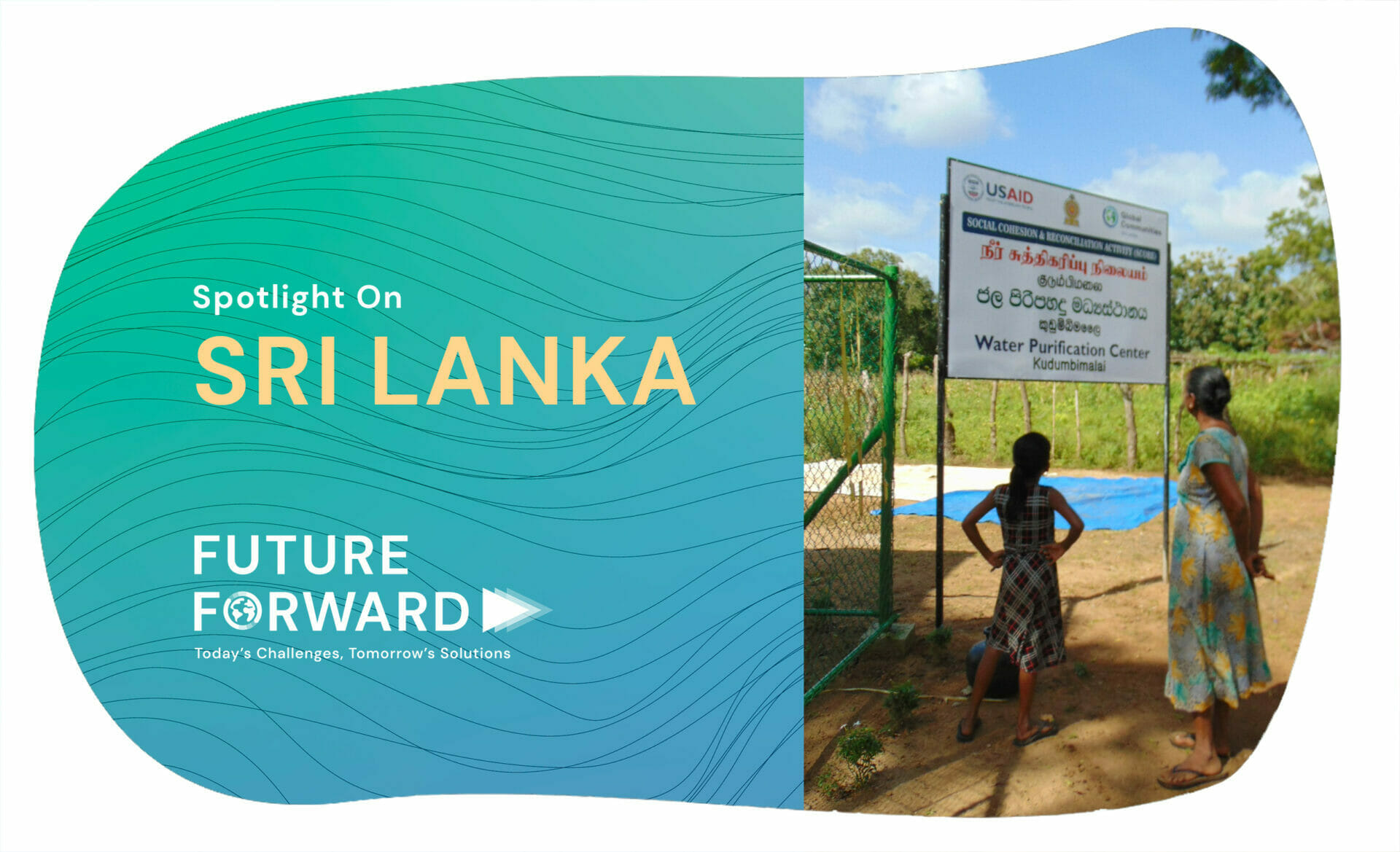 By Rukshana Rizwie and Lizzie Hickman

In Sri Lanka’s Batticaloa district, deep within the jungles of Koralai Pattu South, sits a village of abandoned wells — all deep, dirty and depleted. For many years, over 400 families living in Kudumbimalai had to drink and cook with contaminated water from the repositories, even though they knew it was making them sick.

“We would dig holes near this man-made lake until water filled up,” says Pushpalatha, a member of the village and head of the Women’s Rural Development Society. Her face is sunburned, and her feet are cracked from hours of walking to access water during the dry season. At one time, the only other way for villagers to access water outside the wells was by making a 16-mile (25 km) trek down a dirt track to the main township of Batticaloa.

“We strained muddy water through fabric sieves and let it sit in the sunlight for hours,” Pushpalatha says. “Even then, there would still be worms. This is what we drank for decades.”

Kudumbimalai is a former border village on the frontlines of a protracted civil war. Even though the conflict ended 13 years ago, villagers have lived with sporadic violence and uncertainty for decades. The remote nature of Kudumbimalai and lack of access to clean water has further exacerbated challenges for residents.

Every August, the hottest month of the year, many are forced to migrate to Batticaloa or Ampara in search of potable water. During droughts, some also report having to leave their children at the homes of relatives and acquaintances, where there have been instances of abuse and exploitation.

To address this issue, Global Communities, in partnership with the U.S. Agency for International Development (USAID), implemented the Social Cohesion and Reconciliation (SCORE) program. SCORE aims to reduce socioeconomic disparities and exclusion by supporting critical service delivery among marginalized and conflict-affected communities.

Together with the Women’s Rural Development Society, SCORE cleaned up the largest well in Kudumbimalai, installed a water purification plant and added a storage tank. Now, even if the wells dry up, the tank can hold enough drinking water to sustain the village during droughts.

Community members like Pushpalatha say their lives have changed entirely because of these improvements, from not having to cook with contaminated water to experiencing more stability and safety.

“We, particularly women, no longer travel to the towns in search of water. We can now look after our own families in our own village.”

The project also led to economic opportunities for some of the villagers, as the water purification plant is managed by the community. Seven locals have been hired to maintain the facility and are paid a salary for their labor.

Prior to the implementation of SCORE and its resulting projects and activities, government officials rarely visited Kudumbimalai because it is inaccessible by most vehicles. This lack of interaction and dialogue created a disconnect between citizens and the state and resulted in a lot of mistrust.

“Politicians, local officials and civil society groups would visit our village, take notes and leave,” says Rajeshwary, another member of the Women’s Rural Development Society who also lives in Kudumbimalai. “Because of their lack of action, we lost faith in the government and individuals who promised to help.”

Completion of the water purification plant created an opportunity to mend this rift, however, and a government agent was invited to attend a ribbon-cutting ceremony to celebrate Kudumbimalai’s progress.

“It is a wonderful project at a rural location that needed water access. Perfectly executed,” said Karunakaran, a government agent of Batticaloa. “I am very pleased with Global Communities and appreciative of your efforts.”

To coincide with the opening of the water purification plant, SCORE also facilitated trainings and focus group discussions on how access to clean water, safe sanitation and proper hygiene is related to improved health. Villagers learned how many of the illnesses and ailments they have experienced through the years were connected to the prolonged use of contaminated water.

Now that access to essential services has been established, the community is growing in both hope and size. Six families, including a schoolteacher who left several years ago, have chosen to resettle in Kudumbimalai because clean water is available, and several others have expressed interest in returning.

SCORE has also identified several areas for targeted interventions in the village, including offering psychosocial support, mitigating gender-based violence, uplifting the state of education (the village only has one primary school up to fifth grade) and providing health care support.

For more information about SCORE, which has engaged over 60,000 Sri Lankans since implementation began in 2018, download our fact sheet.

This content is part of Future Forward, a thought leadership and storytelling series on how Global Communities is driving change to save lives, advance equity and secure strong futures. To learn more, visit globalcommunities.org/futureforward.