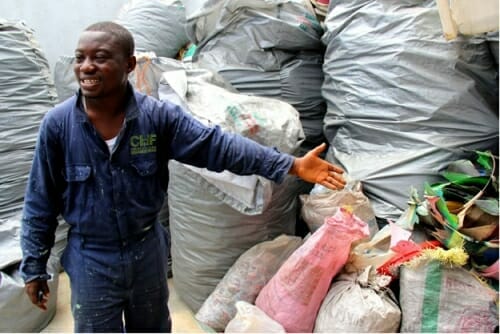 Recycling and Poverty in Cities of the Developing World

E-waste recycling in Ghana.
Throughout the developing world, collecting and sorting waste is a common income-generating activity for large numbers of urban poor, including women and children. This is a hazardous and dirty profession, which is only made worse when it is marginalized by the authorities and general public who associate them with disease, filth, and sometimes even as thieves. At the same time, recycling services provided by the informal sector are a vital service to neighborhoods and cities that are struggling to manage rising levels of waste.  In Bangalore, for example, informal workers recycle 600 tons of waste per day, almost 20% of the city’s daily waste.
Global Communities is helping cities in the developing world, like Bangalore, create new systems that legitimize, dignify and systematize the contributions of informal waste collectors. The results are safer, more hygienic working conditions, improved incomes, and greater economies of scale. We provide focused support to women and children that enable families to break cycles of poverty.
One person that Global Communities helped was Annamma.

Annamma’s Story
With such a difficult beginning and no education, Annamma’s future seemed predetermined. As an adult, she worked long, hot, grimy hours alongside her husband Ramesh to pick and recycle garbage, providing as best they could for their three young daughters. They were pariahs, living on the fringes of society. They were harassed by the police, looked on as thieves for “stealing” other people’s garbage that had been discarded on the streets and in the dumps.

Annamma proudly displays her ID card which allows her to collect garbage without threat of harassment.
Imagine being treated like a thief for doing an honest day’s work. This was the reality for Annamma, a 38-year-old informal garbage collector in Bangalore, India. From the time she was a small child, Annamma would work with her illiterate parents and four siblings, picking and sorting trash to sell to recyclers. The family lived on the streets, spending rainy nights under makeshift tents and scorching hot days searching for scrap to sell.
Annamma’s life began to change with the Global Communities’ Trash to Treasure project which launched in 2009 to create a trash collection system in Bangalore. She joined Hasirudala (“Green Force”), a garbage collectors’ association created by Global Communities to advocate for better working conditions, gain access to government services and stabilize their income. As a member, Annamma received an identity card from the city – which meant she had official status to collect garbage.
“Now there is dignity when we go to collect waste,” Annamma said. “If somebody questions us, we can show the card.”
Today, Annamma no longer picks up garbage. Instead, she is the manager of a dry waste collection center where workers sort trash and separate paper, plastic and glass to sell to scrap dealers and recyclers. One of the workers at the center is her husband Ramesh.
For Annamma, who once thought she was nothing and would never be anything, the transformation is a miracle. She used to be harassed by the police and was looked down on by people she passed in the street – if they noticed her at all. Now she manages a team of people, and the city comes to her for advice on how to manage the trash problem.
Read More about Annamma’s Journey from Waste Picker to Recycling Manager
Annamma’s Story – in photos
Going “garbage-free” is not easy in Bangalore