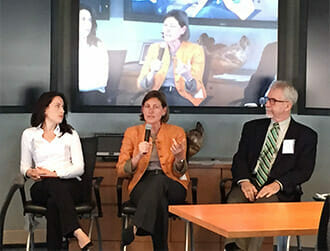 IFC Panel and webcast with Kristin Wilcox, Marise Blom (SCOPEinsight) and Tom Herlehy (Land O’Lakes)
On May 6, 2015, Global Communities’ Program Manager for Cooperative Development Kristin Wilcox participated in the IFC seminar and live webcast on “Building Strong Smallholder Supply Chains.” This half day event organized by the IFC focused on smallholder farmers and how organizations such as Global Communities, Land O’Lakes, ACDI-VOCA and NCBA-CLUSA have been able to successfully integrate farmers into more lucrative supply chains – and the tools they use to do so.  The event was comprised of three panels – Capability Assessments of Producer Organizations, Building Smallholder Loyalty in the Supply Chain and Introduction to New Assessment Tools.
The IFC was particularly interested in Global Communities’ USAID Cooperative Development Program tools which are used to measure and realign program implementation to meet cooperative and smallholder needs. Wilcox highlighted the EMIRGE Cooperative Performance Index (CPI), a tool designed to measure the performance of nascent and newly organized cooperatives while simultaneously serving as a method for the cooperatives to benchmark their own performance and set performance targets. Developed in 2012, the CPI has been implemented by the EMIRGE, USAID Higa Ubeho and USAID Ejo Heza programs and has also been used by the Rwanda Cooperative Agency nationwide on over 5,000 cooperatives. Wilcox spoke on the importance of smallholder segmentation in order to understand the needs, varying capacity levels, and preferences of smallholders who comprise and drive cooperatives across the developing world. The EMIRGE program developed the CPI specifically because the tools that were publically available were too sophisticated for the cooperatives in Rwanda and were not useful in understanding the constraints, areas of growth and unique needs. After developing the tool, which also included GIS modeling, the programs were able to look for clusters of low performing cooperatives, work with Rwandan partner organizations to respond to particular challenges and tailor training programs to target specific performance challenges. To build on the CPI the panel also had participation from Marise Blom of SCOPEinsight, a Dutch company, who has collaborated with the IFC to develop a more complex measurement tool that works with highly performing cooperatives which need a much more sophisticated tool. The two discussions complimented each other by reinforcing the idea that smallholders should not be considered as a uniform body of like actors.
Further on the topic of measurement and as a segue into the topic of loyalty in cooperatives and between cooperatives and supply chain actors, Wilcox spoke on about the DESIGN program’s approach to cooperative facilitation in Uganda using behavioral economics. The DESIGN Uganda program works with Dr. J. L. Morrow, from Birmingham Southern College in Alabama, to design and test a model that allows the DESIGN team to understand and respond to community members’ “willingness to cooperate.” The program is attempting to build a model that is a predictor of peoples’ willingness to cooperate.
The original hypothesis of the DESIGN program was that people who had positive experiences with cooperatives in the past would be more likely to join cooperatives. It was also the belief that people in Bushenyi, Uganda would join a cooperative to lower their overall costs and maximize revenue when selling their produce. In all three cases, the DESIGN team was proved wrong. Having prior experience with a cooperative had no influence on their ‘willingness to cooperate.’ Furthermore, people were not driven to lower their costs and maximize their revenue. Rather, the strongest motivating factor for ‘willingness to cooperate’ was the expectation of a social benefit.
The participants of the IFC event were most interested in the expectations of social benefits over economic benefits and therefore most of the discussion was influenced by the DESIGN theory that social benefits are comprised of ‘bonding’ networks and ‘bridging networks.’ Bonding networks allow people to meet others that are similar to themselves, people that they could potentially see themselves becoming friends with and sharing social experiences. Bridging networks allow people to meet individuals who may be very different from themselves and thus may bring different type of social capital into their lives, such as introducing them to new people who they could obtain information or advice from, provide new opportunities or connections. The discussion was supported by experiences from the other development organizations present who were interested in how social capital also influences issues such as loyalty and reduction of side selling when building relationships between actors in supply chains. The webinar will be available for reply on the IFC website in the month of June. For further information contact Kristin Wilcox, Program Manager for Cooperative Development Programs at [email protected]