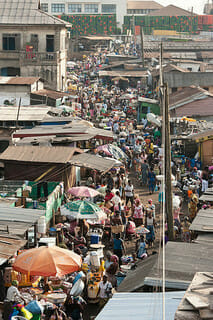 Life without an address is hard and even dangerous. A nonprofit recently used mapping technology to help an Atlanta-sized Ghanaian city bring order to the chaos and improve public services.
By Adele Peters
This story originally appeared in Fast Company.
In most of the world’s fastest-growing cities, the streets have no names–and that leaves about half of the world’s urban population, or 1.8 billion people, without an address.
“To get to my home you need to give directions something like this: ‘Drive past the supermarket for 4 kilometers until you pass the Chinese restaurant. Turn right and drive down the road until you see a vendor beside the big tree. Ask him how to get to Ishmael’s house,” says Ishmael Adams, who is working with the nonprofit Global Communities on a massive mapping project in Ghana.
Over the last few years, the project has mapped out every single street in the city of Sekondi-Takoradi, which is about the size of Atlanta. Now, 3,440 streets have names –  from “Termite Alley” to “Permafrost Street” – and 42,000 properties now have street addresses. (Adams, who lives in the capital of Accra, still doesn’t have an address).
It was a critical project, and not just because unnamed streets are inconvenient. In an emergency, if you don’t have an address, it’s unlikely that police or an ambulance will reach you in time. You won’t be able to get mail or packages. Tourists won’t want to wander a city, afraid they’ll get completely lost. And – perhaps most significantly – without addresses, a city can’t collect taxes, so there’s no money to pay for basic services like plumbing or electricity.
It wasn’t the first time the city had tried to map out neighborhoods, but this was the first time it worked, thanks to advances in technology. “Previous street naming efforts were poorly funded, and had been undertaken with basic analog tools – like rulers and paper sketches,” explains Adams.
This time around, the team used GoogleMapMaker for the project, taking an aerial photo and converting it into a map of each structure on the ground. One hundred sixty volunteers walked the streets, giving buildings numbers and working with communities to choose a staggering number of street names and stencil temporary signs.
“Suddenly, online shopping is possible, which is especially helpful for families living in remote areas,” Adams says. “Emergency services can find your home. Tourists can find their way around the city. But perhaps the most significant step is in providing public services.”
The team surveyed hundreds of households to find out what services they most needed, like water, basic education, and public health. The new taxes – all possible thanks to the address system – will pay for those services.
It’s a process that could easily work in other cities. “Modern technology has made the process inexpensive, efficient and quick,” says Alberto Wilde, country director for Global Communities in Ghana. “It works for people living in slums as much as it does for those in the wealthier areas of the city – everyone benefits.”