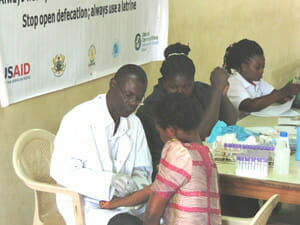 USAID Supports Fight Against Cholera in Ghana
This article originally appeared on the Ghana Broadcasting Corporation.
The United States Agency for International Development (USAID) through the NGO Global Communities, has initiated a nationwide health screening program as part of the comprehensive strategy to stop the spread of cholera.
In line with this, an exercise has been conducted in collaboration with the La Dade Kotopon Municipal Assembly, Ghana Health Service (GHS) and the Ministry of Local Government and Rural Development to ensure that food meant for human consumption does not produce adverse health effects.
The screening started at La, one of the badly hit districts, with an initial 100 food vendors in the communities going through the exercise.
Similar exercises would be held in other districts with outbreaks of the disease.
Mr. George Amoasah, Senior Environmental and Safety Compliance Officer at Global Communities, told the Ghana News Agency in an interview that the organization had already facilitated the distribution of Aquatabs to residents of 32 districts in the country.
“So far 864,000 Aquatabs have been distributed to households that were affected by the outbreak of cholera to treat and purify the water they drink across the country,” he emphasized.
Mr. Amoasah said food vendors played a sensitive role in the communities, hence the need to raise their standards through programs that would enable them to minimize diseases such as typhoid or cholera.
Madam Cynthia A. Abbey, Health Promotion Officer of LaDMA, said the assembly was making everything possible to solve food safety problems in the Municipality to provide quality and hygienic food to the unsuspected public.
She expressed gratitude to USAID and Global Communities for supporting the assembly and promised to intensify the campaign on the maintenance of high standards of environmental hygiene and sanitation.