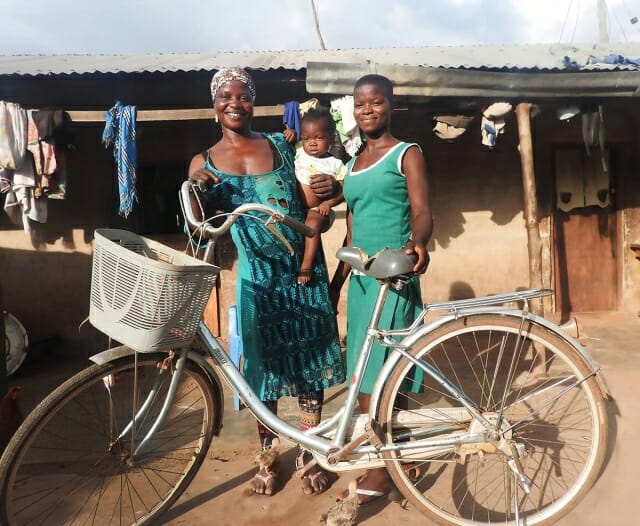 Through the RING VSLA intervention, women in Kitoe-Nkwanta are now able to access credit to meet pressing financial needs. Many women have been able to start a trade, pay off medical bills and school fees – economic gains that were previously impossible.

This the third part of the 4-series story. Take a look at the first one here and the second is here.
In many rural northern Ghanaian communities, pathways to improved livelihoods are limited – literally. Poor road networks, periodically flooded waterways, and limited transportation options leave many without access to critical infrastructure, such as healthcare and banking services. The single rainy season and subsequent harvest also create an uneven cash flow throughout the year. If someone wished to start a small business to provide their household with an economic buffer, raising the capital to do so would be incredibly difficult as profits made from the harvest are required to support the family’s food and financial needs throughout the year. Such is the case for many homes in Kitoe-Nkwanta, an indigenous farming community in Northern Region’s East Gonja District. Though Mrs. Nenen Nlangmal, a mother of six, had an interest in starting a small business to support her family, accessing a start-up loan was a challenge. Aside from the everyday worries of ensuring her household was fed and cared for, she had additional anxiety when her 17-year-old daughter Joyce left the house each morning on her 14-kilometer walk to The Good Shepherd Junior High School. Because of the distance, Joyce often missed the first lesson of the day and was punished when late. “I tried to make savings from the little money I get from firewood and charcoal sales to buy a bicycle for her, but could not because other urgent family needs emerged. I kept hoping that someday I will get access to a loan to start a trade, enabling me to buy a bicycle for my daughter,” says Nlangmal.
“Since I bought the bicycle for my daughter, she always gets to school first and her academic performance has improved…[She] is very happy now and I am, too.”

In 2015, the East Gonja District Assembly, with support from the USAID Resiliency in Northern Ghana (RING) Project, facilitated the formation of two Village Savings and Loans Associations (VSLA) in Kitoe- Nkwanta with the goal of facilitating savings and making home-grown credit options available to women. VSLAs are one of the flagship interventions of RING, which seeks to improve the economic and nutritional status of impoverished homes. Through VSLA, RING supports the formation and training of women’s groups to save collectively and access loans to start and expand small businesses. Nlangmal took advantage and enrolled in the “Uwuumbor-Tii” (“God’s Gift” in the local Konkomba dialect) VSLA. After a few months of saving, she was able to access a 160 USD loan from her group and used 57 USD to buy a bicycle for Joyce. With the remaining 103 USD, she invested 92 USD in starting up a small provisions shop and used the final 11 USD to buy supplementary food for the household. Within six months, Nlangmal had paid back the loan and her daily profits enabled her to save an additional 23 USD, which came in handy when one of her children became extremely ill. “[He was] admitted at the Salaga Hospital and needed a blood transfusion, so I used the money I had with me to help save his life,” she explained.

For Nlangmal, engagement in “Uwuumbor-Tii” made credit accessible, which subsequently afforded her the rare opportunity to buy a bicycle for her daughter and provide food for her family when they needed it most. Most importantly, it allowed her access to the life-saving medical care that her son needed when he was sick. “Since I bought the bicycle for my daughter, she always gets to school first and her academic performance has improved. As a result of my daughter’s marked improvements…the teachers and student body made her the school’s Senior Girls [President]. My daughter is very happy now and I am, too,” remarked Nlangmal.

As part of the RING Project’s integrated approach to reducing poverty and malnutrition, Mrs. Nenen and other Kitoe-Nkwanta households are also beneficiaries of the small ruminant and orange-fleshed sweet potato (OFSP) interventions. OFSP is a nutrition-sensitive crop that reduces iron deficiency and improves other nutrition-related maladies, while small ruminants are provided, along with animal husbandry training, to act as a ‘bank on hooves.’ In June 2016, Nlangmal received three ewes from RING; a year and a half later, she had a small herd of eight sheep. She further explained that, during the recent lean season, her family was in need of food and she opted to sell one ram at a cost of about 40 USD. “For me and my family, had it not been for these RING interventions, we would have been in tears always. We are very grateful for the support USAID RING has given us,” said Mrs. Nenen.

Through USAID RING Project support, Mrs. Nenen and nearly 73,000 other women have begun saving and been given access to loans through their engagement with VSLA, while more than 37,000 have received small ruminants. Each intervention is designed to equip women and their husbands with the tools and knowledge necessary to manage successful economic ventures, address the basic nutritional needs of their family, and build more resilient households.

This the third part of the 4-series story. The first part tells the story of building equality in a family, while the second presents the case of a single mother with disabilities who was able to earn enough and help her family. Come back soon for the last installment.