Can Equity be Built in Traditional Families? 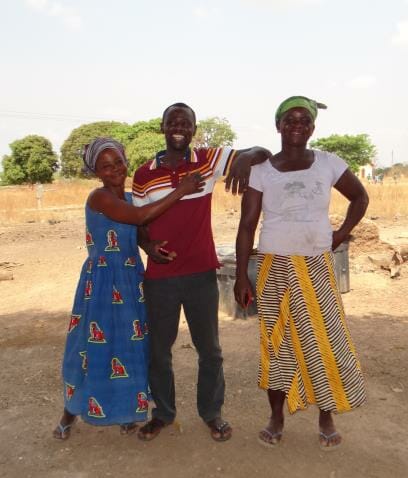 As in many parts of the world, traditional gender norms strongly dictate men’s and women’s roles in northern Ghana. By default, men are traditional household heads and much of the decision-making responsibilities rests on their shoulders, while women are the primary caretakers for the family, particularly the children. In rural communities, these norms are more rigid, sometimes resulting in an uneven and burdensome workload distribution for women. If women are unable to fulfill their daily tasks, such as gathering firewood and water, providing key ingredients for meals, or addressing any health and educational needs of their children, the family often suffers. Another consequence of their busy schedules is that there is little to no time for women to rest or engage in other productive activities, such as starting an income generating activity or taking on local leadership roles.

Such was the case for the Wuninyun family of Tikarni in Kpandai District. Nimgbor, the family patriarch, spent most of his time farming and working outside the home, leaving the bulk of the work for the household and its eleven children to his two wives, Adjoa and N-Munankpor. Before engaging in the Gender Model Family (GMF), a voluntary approach developed by the SEND Foundation and adapted for the USAID and Feed the Future-funded Resiliency in Northern Ghana (RING) Project, the family reported that they quarreled frequently, largely because the wives felt their husband was not as involved with the family as he should be. Conversely, Nimgbor believed that he bore the brunt of the financial responsibilities for the family. Adjoa explained that, “We didn’t discuss family matters together; there was no love and no help for each other. [T]here were always misunderstandings.”Recognizing the critical role family dynamics play in the overall success of RING’s poverty and malnutrition reduction focus, Kpandai District Assembly introduced the GMF activity to Tikarni to augment other efforts in livelihoods, agriculture, nutrition and sanitation.