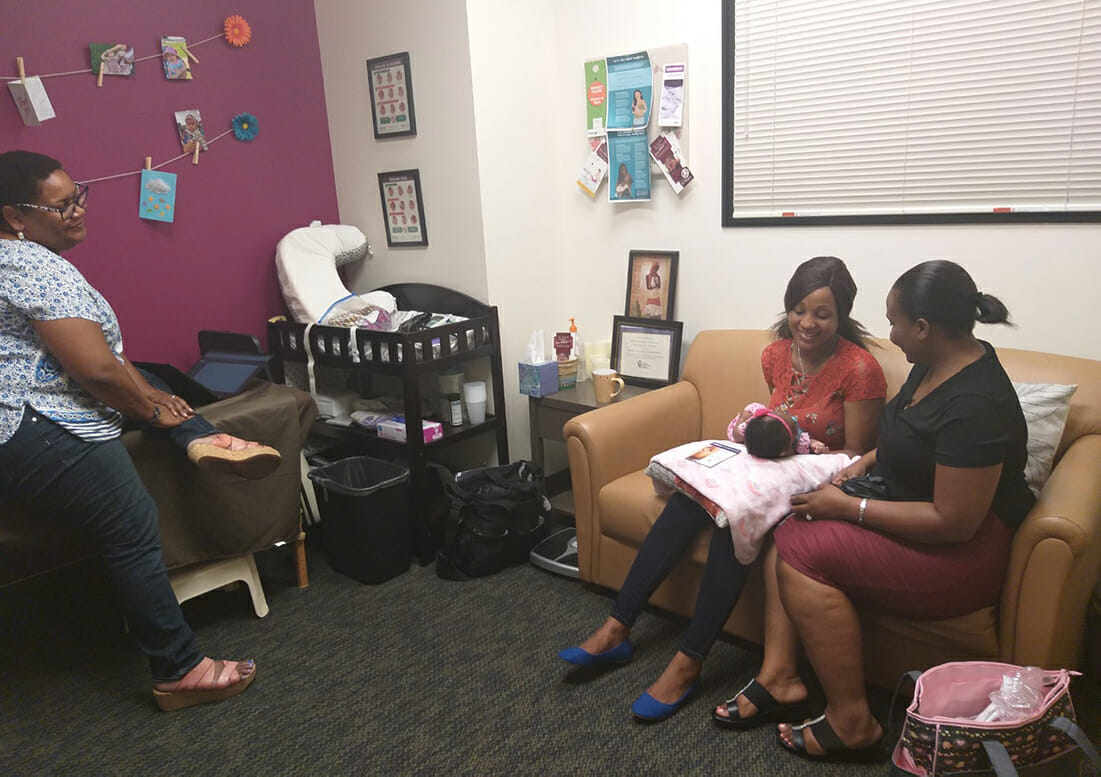 Darynée Blount had every intention of becoming a lawyer. But after traumatic birth experiences with her first two children, she decided to pursue justice in a different setting – America’s health care system.

“The care I was getting and the treatment in the hospital, how that all played out, was abysmal for me,” says Blount, who describes being ignored as a first-time teen mom when she was 16. “I was young and black, so they weren’t trying to hear that I had a birth plan. They immediately assumed I was on state assistance, and I had to ask for support to breastfeed. Nobody was trying to help me.”

When she had her second child, Blount chose to have a natural birth in the hospital again but still encountered mistreatment. She recalls how the doctor manually dilated her cervix without asking for permission and repeatedly dismissed her pain during labor and delivery.

“It felt like this fight and battle to be heard when a woman should be in the opposite mode of embracing and loving her new baby and family. It’s a very vulnerable place to be in,” Blount says. “But those birth experiences are exactly what led me to where I am today. I learned it was just a microcosm of what was happening on a national level for Black women.”

In the United States, Black mothers are three to four times more likely to die from childbirth than non-Hispanic white women, regardless of education, income or access to prenatal care. Black families also are more likely to experience low birthweight, preterm birth and infant mortality.

“This is not a social service. It is not a helping program. This is the high-quality standard of care that every woman deserves but only some women are getting,” says Lisa Bain, director of PCI’s Healthy Start program. “There are a lot of doulas, midwives and breastfeeding counselors in San Diego, but the faces of those providers don’t reflect the diversity of communities we have here. Darynée was someone we knew we really wanted to work with, and we have other partners as well who are helping us change the face of the perinatal health system in San Diego. We want to elevate and strengthen the capacity of each of these communities.”

PCI’s Healthy Start team includes six Perinatal Navigators, all of whom are women of color with ties to the local African American, Somali, Haitian, Hispanic and East African immigrant communities. Each has a background in public health or education and is certified or pursuing certification to become childbirth educators, lactation counselors, and birth and postpartum doulas.

“It was super important to us to have representatives of these populations and not just to insert ourselves in these communities,” Blount says. “It changes your entire pregnancy and birth experience when you have people that you trust and know supporting you.”

PCI’s Healthy Start program also has partnered with For the Village, which provides free doula services to families from marginalized groups in San Diego County. Since June, more than 40 doulas have been trained through the collaboration to provide emotional support and information before, during and after childbirth for expectant mothers enrolled in the Healthy Start program. The doulas accompany Blount on home visits and to key appointments with participants.

“It’s hard for a pregnant woman who is already feeling a little bit vulnerable to then relate to a doctor who doesn’t necessarily understand who they are or where they are coming from,” Blount says. “I’m trying to give them a fighting chance by educating them going into the system as well as having a doula accompany them that will help advocate for them. And then following them after the birth to make sure that we can help them breastfeed, that their babies are staying alive, that they’re getting the care they need if they are sick—the mom or the baby—and that things aren’t ignored.”

To date, more than 130 families are enrolled in PCI’s Healthy Start program, which provides education, resources and other services up to 18 months after a baby’s birth. Perinatal Navigators have recruited or received referrals to the program through word-of-mouth and strategic partnerships with the American Red Cross Women, Infants & Children (WIC) program, Birth Roots, For the Village, the Perinatal Care Network and others.

“We’re trying to think outside the box and going to places where we think pregnant mothers would be, especially in the Black community,” says Nyisha Green-Washington, who serves as both a Perinatal Navigator and Program Coordinator for Healthy Start. “We’ve visited beauty salons, grocery stores, barber shops and churches. We really want to be on the ground.”

In August, PCI held five focus groups with target populations who speak Arabic, Somali, Haitian Creole, Swahili and English. Green-Washington says the Healthy Start program staff gained a lot of valuable insights from those conversations, which centered on birth experiences, racial/ethnic disparities in labor interventions and what these underserved women consider to be quality care in childbirth.

“Women were in there saying, ‘I was forced to induce,’ ‘I was told I couldn’t breastfeed.’ Several expressed that they felt like their birth experience had been stolen from them,” Green-Washington says. “But out of those conversations also came some very motivated moms who want to change the system and are asking, ‘What can we do now?’”

Blount describes meeting a Haitian mother enrolled in Healthy Start who was struggling to understand why her doctors had deemed her pregnancy high-risk. Together with a Perinatal Navigator who spoke Haitian Creole, Blount was able to explain the warning signs she needed to be aware of and the importance of paying attention to her baby’s movements. They provided her with a handout in her language to monitor the baby and instructed her to immediately go the hospital if she noticed any of the symptoms they had spoken about.

“The very next day, she called [her Perinatal Navigator] at PCI and told her that she was doing the kick counts and the baby was not moving,” Blount says. “Two of PCI’s Healthy Start staff members rushed her to the hospital, and she was admitted for surgery within hours of her arrival. The baby was diagnosed with Down syndrome and is alive and well now, because we rallied as a team to support that single mom.”

Bain says that mother’s story is just one of several that speak to the importance of PCI’s Healthy Start program and the host of local partners that are actively addressing maternal mortality among Black pregnant women in San Diego.

“The disparity here mirrors what is happening nationally, but I believe it is San Diego’s most achievable public health goal,” Bain says. “The thread in this work is partnership—with providers and with the populations we serve. We’re increasing the number of doulas, childbirth educators and lactation educators from these communities, so they can continue the work of advocating for themselves.”

Blount adds, “I know we all have the focus of a healthy mom and healthy baby, but we’ve got to work together to make that happen. All women should have this type of care, attention, support, advocacy and clarity about what’s going on with their bodies. They deserve to be empowered by their pregnancy and birth.”

Published 11/06/2019 by Global Communities in Blog, The Americas, United States