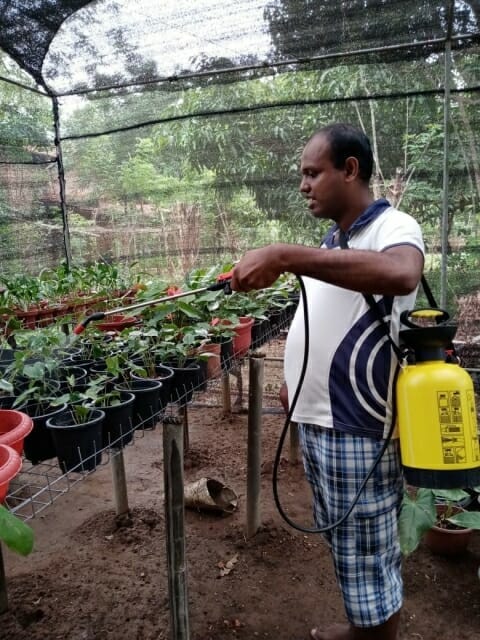 Thirty-three-year-old Isuru Piyumal, from the rural village of Nugeyaya in Sri Lanka’s most marginalized Moneragala district, had been a dependent all his life. His parents realized when he was just three months old that he had an intellectual disability, and they did everything in their power to make him better. But when his seizures didn’t stop, it became too dangerous for him to continue school. He stopped at age 12 and upon the doctor’s instructions, he was allowed to do what he liked at his father’s chena cultivation where he engaged in watering and weeding. He also showed particular excellence in athletics and won medals at games, which his parents encouraged.

However, Piyumal nor his parents ever imagined that he could venture into an occupation of his own, until USAID SCORE/Global Communities, through its partner Wellassa Organization with Persons of Disabilities (WOPD), reached out to him. Piyumal was willing to link with WOPD and attend their training on livelihood support. It was then that things began to transform, slowly but steadily. New vistas opened and he began to realize that a person like him did not need to hide in the shadows any longer.

“Piyumal liked going to the training. He was interested in making some money too. We too want him to be economically independent and we want to save for his future. So we encouraged this and he is happy,” said Piyumal’s father Dayaratne.

It could be because of Piyumal’s various aesthetic interests in drama and music also drew him to flowers. His father says Piyumal loves spending time with the trees and plants in his garden and gets much joy in looking at flowers. So when the WOPD introduced him to a livelihood in ornamental flowers and cut foliage, he was most interested.

WOPD, with its experience in working with persons with disabilities, identified Piyumal’s interests, understood his unique capacities – what he could and could not do – and provided the necessary training and guidance to take up growing and selling ornamental flowers. Although it was daunting for Piyumal and his family at first to start his own business, WOPD supported his startup by providing the plants and pots. He began growing a plant nursery in August this year at his home garden with support from his parents and brother. Except when using chemicals due to dangers to his health, Piyumal carries out all other activities related to the nursery on his own. He managed to grow and sell various flowering plants but he is especially proud of his orchids, for which there is great demand and praise; orchids in the region are highly marketable and suppliers are few. He now has about 150 orchid plants and another set of anthuriums ready to go. He gets a sound monthly income and the profits go to his savings, apart from general expenditures for his nursery. He even wants to expand his business and attract more buyers by setting up advertisement boards at crossroads to lead people to his nursery.

It is a proud moment for any parent to see their children succeed in life. But for Piyumal’s family, it is even more special.

“We were worried about his future and we spent a lot of money to make him be like other children. But we realized he is unique and accepted that. Now that we see him building his future, we have less worry and no words to describe our feelings of gratitude,” his father said.

There are many like Piyumal who came under the wing of WOPD and started a journey to make something of their capacities they thought they never had. Fifty young men and women from 11 Grama Niladhari divisions with various disabilities were guided on business planning, livelihood training, and online marketing according to capacity. They were given the initial tools such as plants, nets, bee boxes, machinery, etc. to start businesses in ornamental fish, ornamental flowers, beekeeping and poultry farming. The training included exposure visits to the relevant production outlets where the trainees received first-hand experience of the employment they pursued.

USAID SCORE/GC through WOPD paved the way for one of the most marginalized and excluded communities to start self-employment, and ensured through much support that they too are very much a part of a community that can grow and prosper.