Do As Your Neighbors Do – Save Money 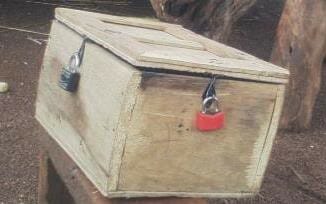 Watching their neighbors setting up small businesses as an outcome of Village Savings and Loans Associations, these women decided they, too, would like to use this tool to overcome poverty and diversify incomes.
This is the last part of the four-part series. You can read the beginning here, the second part here and the third part here.

Pathways to improved livelihoods are limited in most rural communities in Ghana’s Northern Region. Poor road networks, periodically flooded waterways, and limited transportation options leave many communities without access to critical infrastructure and services, such as markets, healthcare, and banking services. This, coupled with a single rainy season and harvest, combines to create uneven cash flows throughout the year. In such communities, even if someone wished to start a small trade to provide an economic buffer for their family, raising the initial capital to do so is extremely difficult. Such is the case for many families in Saliboni, a small farming community within the confines of the Gushegu Municipal Assembly (GMA). There are about 520 inhabitants and, though the USAID-funded Resiliency in Northern Ghana (RING) Project does not technically operate in the community, Saliboni shares boundaries with two communities where it does – Salwia and Mangbali.

In 2016, the GMA, with RING Project support, facilitated the formation of two Village Savings and Loans Associations (VSLA) in Salwia and Mangbali; the goal of the intervention is to educate families on the importance of savings, investing in year-round income-generating opportunities, and to create a safety net during periods of economic stress, such as a death in the family or a poor harvest. VSLA implementation is completely voluntary and is coupled with basic training on financial literacy and business planning, ensuring members have strong foundational knowledge in business principles before taking out low-interest loans and making such investments. Members save their own funds, setting the savings limits based on what they as a group determine they can each afford on a weekly basis.

After two years of VSLA implementation, Saliboni women realized a significant economic transformation was taking place among their friends and neighbors in Salwia and Mangbali. Most women had begun petty trading and other small business, setting themselves up with diversified income streams for year-round cash flow. As a result, some of the Saliboni women requested to join the Salwia and Mangbali VSLAs. Those who were unable to make the weekly trek for the savings meetings came together to form their own community group, contracted a local carpenter to construct the box, and purchased their own locks and savings books. Now, all they lacked was the appropriate training to get started. To address this, they invited the Mangbali VSLA Secretary to their community to walk them through the VSLA mechanics and shortly thereafter, they began saving. The group largely operates on their own, though the Mangbali Secretary checks in on them from time to time.

After saving for a full cycle (typically 10-12 months), the group conducted their first share out exercise, a momentous occasion when the women receive all their savings from the previous year. This event is key as it provides the women with a large amount of capital at once, enabling them to make the sometimes high-capital start-up investments. All total, the women were able to save GHS9,760 (US$2,033) and accumulated a social fund of GHS 378 (US$78.75).

During their share out, they invited the RING VSLA Facilitator, Duut Samuel, for the neighboring communities to witness the event and assist them in minor ways. “Considering the enthusiasm of the group members, I gladly accepted their request, and supported them with the share-out,” Samuel explained. During the ceremony, the Saliboni chief requested that Samuel share the outcome of the event with the Gushegu Municipal Assembly, highlighting the good work the women of the community had done and emphasizing the community’s desire to expand the intervention. Samuel duly passed on this information and, encouraged by the community’s commitment, the Assembly used RING funds to support the formation of two additional VSLAs that have already begun saving.

Using their social fund, the original Saliboni VSLA opted to invest as a group in grain banking, purchasing 25 bags of millet, maize and rice to keep until the market prices go higher and they can sell it at a profit. When recounting their successes, the women from the group remarked that “We are so grateful to RING for bringing VSLA to our neighbors and [eventually] to us. Now we are very confident [in our capacity to] overcome poverty.”
This the last part of the 4-series story. The first part tells the story of building equality in a family, while the second presents the case of a single mother with disabilities who was able to earn enough and help her family. The previous, third part, described how women in Kitoe-Nkwanta got to access credit to meet pressing financial needs.