Enhanced Well-being for Millions of Families in India

A Story of Transformative Integration at Scale

A series of papers recently published in the Journal of Global Health tells the story of Ananya, an initiative launched in 2010 by the Bill & Melinda Gates Foundation in partnership with the Government of Bihar (GoB) and several global implementing partners, including Project Concern International (PCI).

“Innovations in self-help groups by Project Concern International to layer health interventions into groups originally conceived for promoting livelihoods and access to credit was shown in independent evaluations by Population Council and CARE India to be a scalable and highly effective model for broadly improving RMNCHN knowledge and behaviours. The health layering model was subsequently adapted, integrated into, and shown to be associated with highly robust improvements in health across the RMNCHN continuum of care – especially antenatal care, birth preparedness, postnatal care and family planning – in government-led self-help groups across about one-quarter of the state. This platform appears to be particularly promising for reaching marginalised households and communities.”

Ananya interventions were piloted in eight innovation districts from 2011-2013 among a population of approximately 28 million people. Then, beginning in 2014, the interventions were scaled up by the GoB across the rest of the state’s population of 104 million people. The Journal of Global Health series captures lessons that can assist program managers and policymakers to more effectively design and implement RMNCHN programs at scale through technical assistance to governments.

PCI’s focus under the Ananya umbrella has been to work in close partnership with JEEViKA, the State Rural Livelihoods Mission in Bihar, to design and implement a model that integrates economic, social and political empowerment of women with RMNCHN behavior change approaches, utilizing and building upon an existing government-supported platform for reaching vulnerable women and families (SHGs and related community institutions). This approach has resulted in unprecedented RMNCHN outcomes at scale across millions of families. In fact, it has been so successful that many additional states in India are adapting it, with JEEViKA, supported technically by PCI, serving as a role model and resource for other states as well as for the National Rural Livelihood Mission. 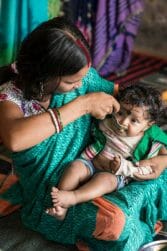 Although other countries do not necessarily have the same robust SHG platform or government-organized system of SHGs and related community institutions, the concept of integrating women’s economic empowerment efforts with RMNCHN behavior change is one that should be explored given the strong outcomes in Bihar.

For example, Ministries of Health could coordinate and consolidate efforts to combine RMNCHN programming more intentionally with the various types of women’s groups such as Village Savings and Loan groups, microfinance groups, women’s collectives, etc. that are being implemented in their countries. Learning from the SHG component’s success under Ananya has the potential to revolutionize RMNCHN programming by tapping into the power and influence of marginalized women themselves.  The potential for greater sustainable impact at scale using existing women’s group platforms, multi-sectoral government mandates, and existing technical and behavior change resources most cost effectively is in front of us; we just need to be creative and bold in making that potential a reality.