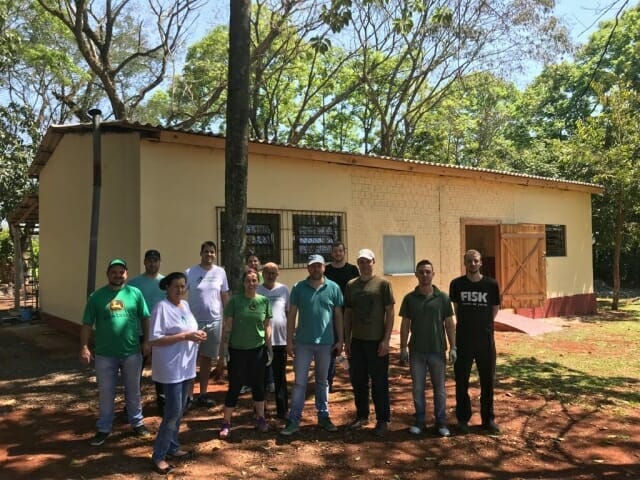 Noeli Jacinta Becker has been a resident of the community of Paraíso neighborhood, in Horizontina / RS, for over 12 years and cannot contain her excitement in recounting the most recent triumph of the community’s residents—the long-awaited legalization of their land with City Hall. “It is the greatest of all our recent achievements,” says the community leader with pride.

The Paraíso neighborhood formed under an invasion of lands belonging to the State of Rio Grande do Sul in May 1999. It is located in the rural area of ​​Horizontina, and today has 87 plots of land and an average of 340 residents. In 2003, the state government transferred ownership of the land to the municipal administration, and since then residents have been eagerly awaiting the legalization of the land so they can finally call it their own.
Noeli says that when she arrived in the neighborhood 12 years ago, the existing infrastructure was hazardous—however moving there meant leaving a life of renting and advancing to owning her own home.

“Before I arrived here in Paraíso, my family and I rented a small house in Eldorado, which also did not have a very good infrastructure. When we arrived in Paraíso, even though at the time there was no running water, for us it meant an end to renting and allowed us to reach our dream of owning a home. Today, receiving the deed to my home fills me with pride and the feeling that I made the right choice for my life,” she says.

Despite difficulties and a lot of effort, the Paraíso Residents’ Association organized and made improvements to the infrastructure of the area, however plans for a dialogue with public authorities leading to legalization of the land many times did not even reach the Association’s agenda.

“In the past, we had a lot of difficulty putting this issue on the agenda and it was not because of a lack of desire, but a lack of deeper knowledge on how to reach out to City Hall and have a dialogue with them. There was a Residents’ Association, but it was not active due to lack of knowledge surrounding community mobilization,” says Noeli.
It was in the midst of these circumstances in 2015 that the residents of Paraíso neighborhood began to participate in the John Deere Foundation-funded Sowing Futures Program, which is implemented in Brazil by Global Communities. They received Participatory Action for Community Enhancement (PACE) training and afterwards resumed the local Residents’ Association.

Empowered with an active group newly strengthened by the training they received, the residents developed a Community Development Plan, which guided steps towards their desired achievements.
“Our participation in the Sowing Futures Program was a watershed for us; we resumed the activities of our Residents’ Association and through PACE we acquired a lot of knowledge that helped us in all the most recent achievements. Putting into practice everything we learned during the training and starting to develop and present projects was a fundamental step for everything we achieved,” she says.

The mobilization of residents and the achievement of autonomy drew the attention of public authorities and contributed to land regulation, as stated by the deputy mayor of Horizontina, Jones Cunha.
“We were able to build many things in a short period of time due to the organization of the Paraíso Residents’ Association and created a totally different reality than what we had three years ago. We are now working together with residents in order to formalize their property titles. 80 families will fulfill an old dream that started more than 20 years ago—we are grateful to participate with them in this construction. This is an example of a very successful partnership between community leaders and the government,” deputy mayor Cunha says.
According to Noeli, reaping the fruits of the work carried out by the residents in recent years brings about two feelings: those of gratitude and belonging.

“Whenever I stop to think about everything we have achieved in recent years, I am very happy; there were many things accomplished and a lot of work done by us through the Residents’ Association. Today I can proudly say that I am a resident of Paraíso neighborhood, that I have the deed to my house, and that I have a community space to gather with my friends and family,” she says.

Fruits of Community Efforts
Since 2015, the community leaders of Paraíso neighborhood have worked together with residents, local partners and the government to improve the community. Since then, several goals have been achieved, such as the revitalization of the neighborhood square, which received a playground, gym, multisport court, lighting and pavement; the placement of street name signs; the complete revitalization of the community center, which received new roofs, floors, windows and ceilings; and the creation of a soccer school for children. Recently, the Residents’ Association submitted a project and won funding from the Metalworkers Union to build a basketball court in the neighborhood square.

All of these achievements were leveraged thanks to the knowledge acquired through PACE training, where leaders learned how to organize themselves, mobilize resources, and plan and execute improvement actions. This same knowledge will be applied to realize additional goals, such as obtaining equipment for an industrial kitchen, the installation of a barbecue area, and the construction of a storage unit in the community center.
Community in Action

Global Communities, through the Sowing Futures Program, encourages community development by collaborating with and building the capacity of local communities so that they seek improvements based on their priorities through democratic practices, which helps them to become self-determined and develop the community’s self-reliance. This approach works with communities in stages to build residents’ capacity to control community assets and mobilize resources to solve a given problem, as well as to strengthen the community’s flexibility and social unity.

Published 01/30/2020 by Global Communities in Blog, Brazil, The Americas