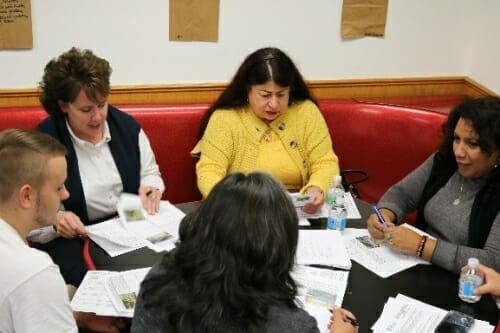 Floreciente is a largely Hispanic, lower-income neighborhood in Moline, IL. The close-knit area has a history of organizing around cultural issues and  standing up to gangs. But as the community has aged, no young leaders have emerged to take their place. Their weakened organization became apparent in 2015, when the neighborhood could not generate enough support to keep the local elementary school from closing.  But they knew they needed to organize  and present a unified voice to public officials to ensure decision-making that reflected the needs of  the community. To this end, the Flourishing Communities program is working in the Floreciente neighborhood working to create long-lasting, community-led change by organizing and educating residents and business owners to participate in community and economic development decisions affecting their neighborhood.

In November 2015, in the absence of a functioning neighborhood association, Global Communities began leading monthly community meetings in which neighbors learned about developments planned near the neighborhood, and collaboratively identified projects to bring neighbors together. One project identified at the first community meeting was to re-establish the neighborhood association – but when given the choice of projects to volunteer for, neighbors tended to focus their efforts on beautification projects. So Global Communities continued to hold monthly meetings, and the small group of neighbors continued to grow  as neighbors recruited others to attend.

Just over one year later, at a regular monthly meeting, more than 20  residents, business owners, and “amigos” of Floreciente met to review the list of more than 40  projects that had been identified during the last year. As attendees flipped through the pages of projects in process or yet to begin, a key factor became evident to all: they needed to organize formally to be effective advocates for these projects. In subsequent meetings, Global Communities facilitated discussions to develop a mission statement, to outline an organizational structure, and to create guidelines for membership. Volunteers went out into the community armed with this information to recruit more members and seek nominations for leadership positions. During this same time period, the Floreciente business owners expressed a desire to join the community group – so the neighborhood would have a unified group to represent their interests.

At the December 2016 meeting, more than 40  people gathered to honor the merging of the community and business groups, to reconnect with neighbors, and to celebrate the holidays. Community leaders spoke about the importance of a Floreciente Association – highlighting completed projects such as the mural at the Boys and Girls Club of the Mississippi Valley, where more than 40  volunteers helped design and paint the mural. Others reminisced about the history of the community and outlined future projects that deserve the community’s attention. Prior to the meeting’s conclusion, Global Communities asked for nominations to  the Floreciente Association Board. The nomination period would continue until the end of January, allowing community members time to enjoy the holiday season, but still provide ample time to be involved in the development of their community.

By the end of January, community members had submitted 11 different names of individuals to represent them on the board. Global Communities reached out to nominees, seven of whom  expressed interest in joining the Board. These include a teenager who grew up in the neighborhood, three people who were leaders of the previous neighborhood association, a community activist, a gentleman who raised his children in the neighborhood, and a woman who had lived there most of her life.

At the February community meeting, nominees outlined their connection to the neighborhood, why they would like to be a part of the board, and what projects they are hoping to champion. One board member noted recent positive changes in the neighborhood – partly as a result of the Flourishing Communities program holding monthly meetings – and expressed a desire to continue identifying leaders within the neighborhood to improve the current conditions of the community. Since the  nominees represented a diversity of genders and ages, no community members objected to any nominations, and with such a small group of nominees, Global Communities decided not to hold elections and begin working with the board member immediately to launch  the Floreciente Association.
The Board started meeting on a weekly basis with Flourishing Communities to jump-start their association by planning for a “Launch Party” for late May, developing bylaws, appointing officers, and starting the required administrative steps,  such as registering with the state. As decisions are made, to demonstrate a commitment to transparency and the community participation, the Board reports back at each community meeting and gathers any input they need from the Association members.

In the coming months, the Board will have many more decisions to make, such as the future direction of community priorities, and will have to work hard to recruit more members to the Association to serve as committee chairs and to volunteer on projects. Flourishing Communities will continue to work with the Board and the Association – advising on both organization needs and project implementation – while working with the Board to adopt a long-term strategy for the Floreciente Association. In so doing, the Association will best be able to capitalize on their members’ unique perspective and skills to foster community-led development for years to come.

Funded by the John Deere Foundation through May 2018, the Flourishing Communities program is working in Floreciente to create long-lasting, community-led change by organizing and educating residents and business owners to participate in community and economic development decisions affecting their neighborhood. For more information on our programs in Moline, Illinois contact [email protected] or visit www.globalfloreciente.org.

Published 04/27/2017 by Global Communities in Blog, The Americas