As climate change continues to create global challenges, Global Communities is working to create innovative, community-focused solutions to help mitigate the impacts. The city of Medellín, Colombia, faces unique risks associated with climate change due to the city’s topography and rainfall patterns. Heavy rain can result in flooding and mudslides across Medellín and as a result of the city’s topography and unregulated construction, people experiencing poverty are the hardest hit by these disasters.

To address financial impacts of climate-related disasters and to support Medellín’s vulnerable communities, Global Communities – in a public-private partnership with the Insurance Development Forum – implements InsuResilience. The main objective of InsuResilience is to develop an insurance product that protects against natural disasters associated with climate risks.

In recognition of Environmental Awareness Month, we recently connected with our InsuResilience team to learn more about the importance of partnerships and how insurance products can support communities that experience climate-related disasters.

This interview has been edited for length and clarity.

According to a climate change study conducted in the city of Medellín, Colombia, over a 50-year period (1960-2010), the city of Medellín has suffered from climate change influenced by human activities such as: growth in the number of vehicles circulating in the city (which are the main generators of greenhouse gas), population growth, territorial expansion and industrialization. Currently, these aspects continue to generate great demand for natural resources, increasing the impacts of climate change.

The study also shows that immediate actions must be taken by creating public policies and taking civic action that focus on mitigation and adaptation as a strategy for quality of life and sustainable development.

If concrete measures are not taken, climate change will continue to impact the city.  Increases in the intensity and severity of rains will result in sudden increases in streams, torrential floods and landslides. These disasters will particularly impact the most vulnerable areas of the city, where the population at greatest risk of suffering from inclement weather patterns is settled.

What is InsuResilience and when did this program start?

InsuResilience is a program that supports community resilience in cities by providing insurance against risks associated with climate change. It’s part of Global Communities' comprehensive approach to financial risk management through a transfer instrument such as insurance.

In 2017, the program kicked off with studies in three countries–Colombia, India and Ecuador–to determine the feasibility of developing insurance for risks associated with climate change. An analysis of disaster risk management systems and financial insurance systems was run to assess program feasibility.

Based on that analysis and with the support of the German Development Bank, it was decided to move forward with programming in Colombia based on pre-feasibility studies conducted in five cities: Cartagena, Cali, Manizales, Medellín and Pasto. The first InsuResilience project launched in May of 2021 in the city of Medellín. With the support of the InsuResilience Solutions Fund, a similar feasibility study has been developed for the city of Tegucigalpa in Honduras.

What makes this program unique?

This is the first time a public-private partnership has been proposed where a non-governmental organization facilitates meeting the demand for protection against economic and social impacts of climate change.

Various studies indicate that $1 received immediately after a disaster is worth the same as $5  delivered later in the typical cycle of post-disaster aid. Considering this, the program has been working on the development of parametric insurance products that, due to their nature associated with a parameter, are easily verifiable and deliver compensation in less time.

The project also includes capacity building activities for the local insurance industry in the knowledge and development of parametric products, as it is a type of product that is still becoming known in the local markets of underdeveloped countries.

What are some of the strengths that come from partnering with municipalities instead of individual insurance consumers?

The global economic crisis caused by COVID-19 has increased poor and vulnerable populations, pushing poverty figures to percentages estimated a decade ago in some Latin American countries.

This crisis has caused a reduction in income among the poorest families, who can hardly afford insurance to protect themselves from the risks they face. Additionally, the persistent lack of financial education prevents many from understanding the convenience and necessity of having insurance.

The program works with the municipality, because the objective of the project is to contribute to the resilience of cities and their inhabitants, helping them to manage the economic and financial impact of disasters associated with climate change. Municipalities are the first that are called upon to deal with disasters in cities when they occur, allocating huge amounts of money to disaster relief. Additionally, most of their work is concentrated on caring for the poorest communities and vulnerable inhabitants of the city, because citizens who have sufficient income and resources tend to respond to disasters with their own support networks and resources. 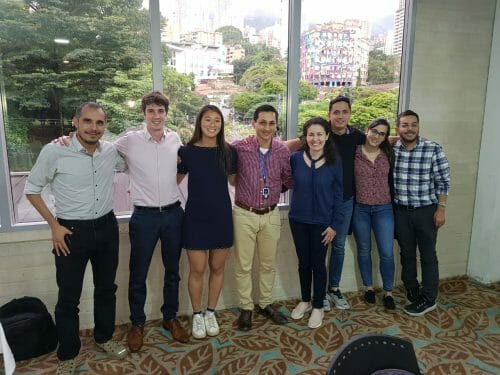 The InsuResilience team in Medellín, Colombia.

Working with municipalities makes it possible to break down economic and knowledge barriers to insurance. They also have access to aggregate information on the city, its inhabitants and its risks. Likewise, having the municipality as the policyholder facilitates and reduces the administrative costs of implementing insurance, which would be higher in the case of individual insurance.

Finally, by paying the compensation to the municipality, it can be used for immediate response to disasters and it is guaranteed that this product will benefit all inhabitants affected by the disaster in the city. This means that it does not matter whether they are owners, permanent citizens, displaced, or even migrants, in order to receive assistance in the event of a disaster.

Insurance funds will be used to support emergency response management activities in the delivery of humanitarian assistance, operational services and the recovery of basic infrastructure.

Why is the InsuResilience program capturing climate data related to Medellín and how is it being used? 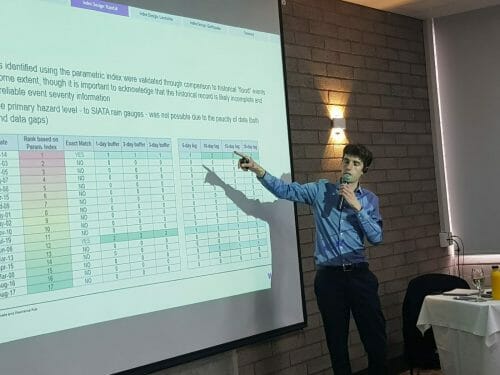 What is the current role of Global Communities in this project and how do you see its evolution as the project grows?

Global Communities is the leader of the consortium, which is made up of Hannover Re and Willis Towers Watson. Our role is to represent vulnerable communities in Medellín, and we are applying our experience and knowledge in Disaster Risk Management to this project. By virtue of the foregoing, Global Communities is facilitating the development of the product in a participatory manner, working in close collaboration with the authorities of the Municipality of Medellín, and specifically with the Administrative Department of Disaster Risk Management, ensuring participation, appropriation and the empowerment of all relevant actors.

The Mayor's Office of Medellín contributes relevant information, provides the headquarters for the project team and co-organizes the workshops. In addition, it will allocate the financing for the insurance product and will implement the placement of the product developed in the project at a later stage.

During virtual and in- person project workshops, it has been possible to maintain a high level of attendee participation. Due to the innovative subject, great interest has been created in learning more about these financial protection solutions from both the organization, the academy and public officials from different ministries. As the project is implemented, capacities will be strengthened in the areas of exposure and risk modeling, and parametric solutions.

Could this project be scaled and implemented in other municipalities?

The insurance product in Medellín will be the first product of its kind to be developed  for a city. In this sense, it has the potential to be replicated in other interested municipalities. Acquiring this program can strengthen their emergency plans for natural disasters.

Is there anything else you would like to add?

The project is an initiative co-financed by the InsuResilience Solutions Fund (ISF) set up by the German Development Bank (KfW), on behalf of the German Ministry for Economic Cooperation and Development (BMZ). The ISF is administered by the Frankfurt School of Finance and Management. The other co-financer of the project is the consortium made up of Global Communities, Willis Tower Watson and Hannover RE.

Published 09/22/2022 by Lizzie Hickman in Blog, Colombia, The Americas

By Tanner Roark Climate change is here. It can be seen in every corner of the world, from heatwaves in India and winter storms in Texas to hurricanes in Guatemala and drought in Madagascar. Climate change is cruel. It spares no people or place, and its slow creep of destruction results in the loss of…

Increasing the Climate Resilience and Productivity of Emerging Farmers in Zambia

In Zambia, agriculture is a key employment sector and one that is essential to local food security. However, emerging farmers are facing many challenges, including fall armyworm threatening their fields, climate variabilities and poor agricultural productivity. Global Communities, Corteva Agriscience, John Deere and the U.S. Agency for International Development (USAID) partnered in 2020 with the…