Learning to Collaborate Through Sowing Futures in Argentina 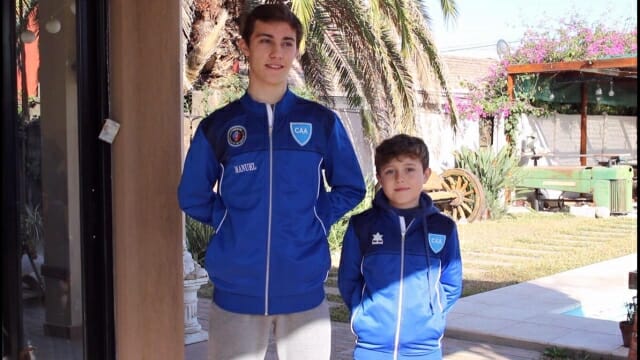 “While Manuel has always been the type of student to speak up in front of his peers, his class is not very diverse in terms of ideas and those who speak up in public generally expose themselves to negative feedback from their peers,” explains Jorgelina Allegranza, professor of philosophy and the leader of the secondary school mentoring programs at Dante Alighieri School, which Manuel attends.

Jorgelina explains that since Manuel started to participate in the Sport Leadership and Community Facilitation training, he became less afraid to speak in front of his peers. Now, Manuel is “the one who puts into words the problems his peers are facing. He is now able to channel the group’s requests, and has become a positive leader. For the first time, they all seem to be on the same page.”

She adds, “he’s firm in his arguments, which include both complaints or challenges and possible solutions to those problems.”

Manuel says that as a teenager in a small town in the interior of the country, dreaming of expressing himself was never easy. But with the arrival of John Deere to the city of Las Rosas, new possibilities were opened, such as the Sports Leadership and Community Facilitation workshop. Those who took full advantage like Manuel began to experience a positive transformation, both personally and collectively.

Manuel, a devoted martial arts practitioner since he was a child at the Almafuerte Club, explains that he was always interested in psychology and when he found out that they were going to give a leadership course it seemed like “a phenomenal opportunity.”

Although the course is virtual in format, Manuel asserts that those responsible have managed to “connect us all as a team.” “This is what interests me most: being able to reach the other members of the group, understand them, achieve cohesion among us.”

Jorgelina says that Manuel had not yet found a space where he could really connect with others. But as he took more classes, Manuel came to understand that the key was to really integrate with the group, understand the people, and from there propose changes that incorporated everyone’s voices. He says he was able to apply the contents of the classes to his daily life.

Like Manuel, Lucila Rocha, a medical student, says that the practical nature of the workshop gave her the opportunity to think about the concepts with everyday examples. This allowed her to save time and make fewer mistakes in her work with the Kemmis Club where she volunteers.

“Sometimes my peers and I talk about certain issues that need resolving, and while to someone else who hasn’t received these tools it might feel complicated to find the solutions, for me, I find that now I can employ the concepts I learned quite naturally,” says Lucia.

“There are many things we learned in the workshop that we already did, but we did them in ways that weren’t as effective. Through the workshops, we learned to do those things well, and now I can see the results,” says Lucia.

Manuel’s “Super” Project
Manuel says he is such a fan of the workshops that he wouldn’t change a thing about them. He loves to talk about his experience, but he gets a special twinkle in his eyes when he talks about his own personal project.

“The workshop served me a bunch! I’m now generally the one who takes initiative among my peers. I’ve been able to apply what I’m learning from “idea walls” and the PACE collective action project in a project I have with a few friends.”

Manuel’s project is a collaborative book about superheroes with five writers between the ages of 5 and 16. It’s challenging work, he says. “It’s hard to keep them motivated because at our age we get distracted or bored really easily.” It’s clear from the way he speaks about this project that he’s a clear example of a strong facilitator.

He explains that he has been working on this project for about a year and the group has been able to work collaboratively on it thanks to a webpage that Manuel created himself and using many of the skills he learned through the workshop.

About the Sports Leadership and Community Facilitation Training Course
The Sowing Futures program came to Las Rosas in March with the objective of working with youth to capacitate them to become leaders in their sports teams and facilitators for projects in their communities. To reach the youth, our team contacted local clubs Kemmis and Almafuerte and secured a partnership to help refer youth in the program. The training course was planned for in-person interactions, but due to the pandemic, our team reconfigured the workshops to be purely online.

Through the PACE (Participatory Action for Community Enhancement), we were able to develop and implement a participatory process by which to improve leadership and facilitation skills. We analyzed the aptitudes and skills of club members to prioritize needs and then generate the project that would best address those needs, as well as find and mobilize the resources to make that possible.

Published 11/24/2020 by Global Communities in Blog, Argentina, The Americas