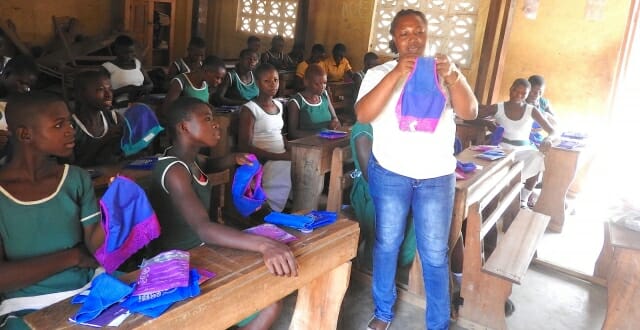 By Celia Zeilberger
This article was originally published on USAID Global Waters
In some remote parts of Ghana, girls are told that crossing a river during their menstrual period will offend the river deity — so some skip school to avoid incurring the deity’s wrath. In some rural communities in western Nepal, menstruating women are told that their presence jeopardizes crops, water supply, and health — so they go into quarantine each month. In Afghanistan, some women are told that showering during menstruation causes infertility — so they spend their entire cycle without washing themselves.

Approximately 300 million women menstruate every day. For millions of these women, this natural monthly occurrence is disruptive or even dangerous. A lack of adequate facilities and hygiene products, coupled with myths and stigma, cause some to skip school or work or go into isolation. Increased advocacy over the past five years has raised awareness that menstrual hygiene management (MHM) is more than an issue of health and hygiene. Lack of MHM can have a significant impact on economic and educational opportunities for women and girls. With these impacts in mind, a formerly taboo topic is now getting attention from the donor community and partner governments alike.

USAID is working to integrate MHM into a range of its activities across sectors. “MHM is a critical aspect of addressing women’s and girls’ empowerment by alleviating a major constraint to their participation in education and public life,” said Sylvia Cabus, senior gender advisor at USAID’s Office of Gender Equality and Women’s Empowerment.

USAID’s Approach
Empowering women and girls and promoting gender equality are core operating principles of the U.S. Government Global Water Strategy and USAID Water and Development Plan. To alleviate a major constraint to women’s and girls’ participation in education and public life, USAID seeks to integrate menstrual hygiene management interventions where practical and improve MHM in key settings, including schools.

“USAID recognizes menstrual hygiene as a vital part of the health and dignity of women and girls and provides support to implementing partners to address needs in this area,” said Cabus. Most of its work focuses on three areas: facilities, products, and education.

USAID supports the construction of latrines in schools, workplaces, and communities through its water, sanitation, and hygiene (WASH) projects. It takes steps to ensure these toilets are private, secure, and accessible for all, and equips them with soap and water for washing. These features not only make them period-friendly, but also safer and more hygienic. “USAID’s sanitation programs are designed to ensure that the specific needs of women and girls are met,” said Cabus.

Making menstrual hygiene products more accessible is the second pillar of USAID’s MHM approach. USAID supports female entrepreneurs to produce and sell sanitary napkins on the local market, provides menstrual hygiene kits to schools and workplaces, and installs sanitary napkin vending machines in public toilets to achieve this aim.
The final, and perhaps most critical, component of USAID’s MHM approach is education. This means teaching girls and boys about menstruation and how to use menstrual hygiene products, as well as educating the general population with the aim of countering stigmas and misinformation. Boys may be aware of the cultural restrictions surrounding menstruation but not informed at all about the biological process. Teaching boys about menstruation can promote empathy, reduce stigma, and lead to more support for menstrual hygiene improvements.

USAID’s education focus also includes working with governments and communities to influence norms and policy. For example, in Nepal, USAID works with religious leaders and traditional healers to combat stigmas that cause some women to go into isolation during their periods. And in Madagascar, the USAID Rural Access to New Opportunities in Water, Sanitation and Hygiene (RANO WASH) program works with multiple ministries to promote MHM curricula in schools with the goal of minimizing school absences due to menstrual hygiene needs. USAID also supports community health volunteers across the country who are promoting improved MHM in their communities.
“I have always thought that we weren’t supposed to discuss menstruation in public. It is encouraging to hear that we can talk about it among friends and that we should not feel ashamed of it.”

These activities have led to increased female empowerment. One Malagasy high school student, Fanja, was thrilled when she first learned about MHM from a USAID event for International Women’s Day. “I have always thought that we weren’t supposed to discuss menstruation in public. It is encouraging to hear that we can talk about it among friends and that we should not feel ashamed of it,” she said. She then joined the RANO WASH team at their booth, so she could do her part to educate her peers and eradicate stigmas.

A New Comfort Zone in Ghana
In Ghana, a 2018 USAID pilot project showed the vast potential of MHM programs to transform lives. The WASH for Health program launched the pilot in cooperation with Be Girl, a U.S. company that specializes in sustainable menstrual hygiene products.

Stigma against menstruation is strong in Ghana. Some believe it is dangerous for menstruating girls and women to cook, touch water or animals, or mix with the opposite sex.

Recruiting volunteers to participate in the pilot proved difficult. “Most of the girls were uncomfortable talking about menstruation. In fact, we encountered situations where girls even denied they had started menstruating due to stigmas,” said WASH for Health Project Director Alberto Wilde.

Luckily, female teachers and a few of the more outspoken girls in each school assumed leadership roles and helped recruit more than 1,000 girls to participate in the pilot. USAID provided these girls, all of whom were from low-income families, with two sets of the Be Girl panties. The “Periodpanty” is underwear with a pocket where a reusable absorbent towel is inserted. The girls also received a Be Girl SmartCycle, a wearable menstrual tracker that helps girls learn about their cycle. The girls said the panty made it easier and more comfortable for them to attend school. “I feel good and comfortable when I wear the panty because it is invisible,” said Florence Sowu, one of the girls who participated in the pilot.

In addition to educating the girls on how to better manage their periods, the project also educated the girls’ parents and male classmates on menstruation, with the aim of fighting stigma and misinformation. Parents learned how to talk about menstruation with their daughters and ensure they have access to the hygiene products they need. Boys learned about puberty in general, as well as why menstruation occurs and how girls manage their periods.
To break down taboos around periods, each boy in the pilot wrote an anonymous letter to a woman in his life, explaining his newfound knowledge about menstruation and offering support. “Menstruation is a natural period, which the girls pass through when they become mature ladies,” wrote one boy in his letter. “When you menstruate, don’t say you will not play, come to school, talk with boys, etc.,” wrote another.

Now, the boys and girls feel more comfortable about the topic of menstruation. Prior to the pilot, less than 18 percent of the boys considered themselves to be comfortable around menstruating girls. At the end of the pilot, this rate skyrocketed to 87 percent.

Beyond Health and Hygiene
While MHM is still a burgeoning field in development, USAID is working to build a base of knowledge and data that can inform future MHM programing in a range of sectors.

In March 2019, USAID launched a new research activity to contribute to the sparse body of knowledge on MHM, the different ways that men and women use sanitation facilities in the workplace, and women’s economic empowerment. This effort is funded by the Office of Gender Equality and Women’s Empowerment, with technical support from the Bureau of Global Health. The activity is studying MHM’s impact on women in workplaces, examining questions such as whether lack of MHM products, facilities, and knowledge inhibits female workforce participation. In addition to a study on current evidence on MHM and economic impact, the project will design and implement an action research study to increase women’s economic empowerment through improved MHM. The results will be used to inform future USAID and partner country government activities on how to address MHM and reduce its impact on women’s ability to participate in the workforce. The study supports USAID’s work on women’s economic empowerment, including the White House–led Women’s Global Development and Prosperity Initiative.
“USAID is looking at opportunities to share best practices, and look more holistically at intersectoral work and opportunities related to MHM,” said Cabus. In doing so, the Agency is facilitating a world where women are empowered and their health, education, and livelihoods are secure.