Nlangmal and the Bicycle: Small Investments Making a Big Difference 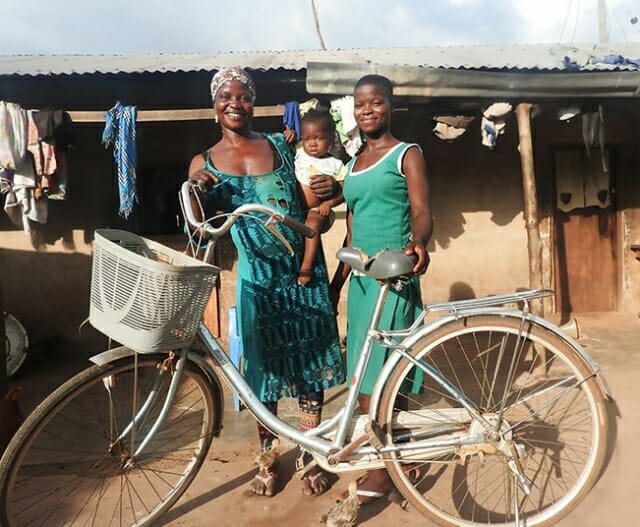 Nlangmal and the Bicycle: Small Investments Making a Big Difference
By Bethany Davidson,Programs Manager for Resiliency in Northern Ghana (RING) Project
Nlangmal and her daughter Joyce pose proudly in front of the bicycle that she was able to buy with her first loan. Photo credit: Mohammed Ali Ibrahim, RING Project.

Not long ago, Nlangmal didn’t have a spare dollar to her name. But despite her lack of resources and limited formal education, she had many ideas for income-making activities. Through the United States Agency for International Development (USAID) and Feed the Future’s Resiliency in Northern Ghana (RING) project, Nlangmal received basic training on how to manage a savings account, and then she and other like-minded women in her community formed a Village Savings and Loans Association (VSLA). These groups help cultivate a savings culture among members who voluntarily save as a group and use their savings to provide loans to each other with interest. Nlangmal and her fellow group members began to save a few cents each week, and soon those pennies added up to dollars.

After several months of saving as a group, Nlangmal was able to take out a small loan. She used that money to start a small neighborhood shop and the profits that she made allowed her to pay back the loan and the accrued interest. The women in Nlangmal’s savings group take out similar loans on a rotational basis ensuring that everyone gets a chance to pursue their investment dreams. The training that they receive through the RING project guides them to diversify their income by investing in efforts that will produce money year-round, reducing the seasonal poverty that affects the region.

Around the same time that her business started taking off, Nlangmal’s youngest son became seriously ill. Because she had the extra money on hand — an uncommon luxury — she didn’t think twice about taking him to the district hospital. There, he was diagnosed with a condition requiring a blood transfusion — a costly procedure, which Nlangmal could now afford and which ultimately saved his life.

A Village Savings and Loans Association group in Northern Ghana. The women have parceled their savings into batches of GHs 100 (US$23) for easy counting and disbursement to the members. Savings share-outs occur after the group has been operating for roughly 9–12 months and at strategic times of the year — for example, at the start of rainy season so group members can invest in agricultural ventures to produce greater yields and continually boost their profits. Photo credit: Mohammed Ali Ibrahim, RING Project.

If that wasn’t enough, Nlangmal was able to use part of her initial loan to purchase a bicycle for her oldest daughter Joyce. Before having the bike, Joyce had to walk more than 15 miles a day to attend the “nearby” junior high school. Despite setting out just after dawn each morning, she was constantly late, missing the first class and often receiving punishment for her tardiness. Joyce has a bike now, thanks to her mother’s determination and hard work. Her improvement in her school performance has been remarkable and she is now often the first to arrive on campus. Her grades are such that the student body voted her to be the Girls’ Prefect — equivalent to being elected class president.

Nlangmal’s success was born from a dream and the collective efforts of dedicated women in her community. RING’s main inputs were the time and effort from the local government agents to train the women and meet with them weekly, as well as a metal lock box which holds their collective savings. Since the start of the project, local government partners have established more than 2,800 of these savings groups throughout Northern Ghana. Roughly 81,000 women, using their own money, have saved more than USD $2.75 million and taken USD $1.22 million in loans that they pay back, without fail. It’s amazing what a small investment and a little education can do for otherwise capable and committed individuals; women, wives, and mothers.

The Resiliency in Northern Ghana (RING)Project is an integrated program under the U.S. Government’s Feed the Future initiative, through the United States Agency for International Development (USAID). RING works in close partnership with the Government of Ghana to sustainably reduce poverty and malnutrition. RING’s purpose is to improve the livelihoods and nutritional status of vulnerable households in targeted communities of 17 districts in the Northern Region. This is being achieved through three complementary project components: increasing the consumption of diverse quality foods, especially among women and children; improving behaviors related to nutrition and hygiene of women and young children; and strengthening local support networks to address the ongoing needs of vulnerable households.

(Photos and research for this story were provided by Mohammed Ali Ibrahim, RING Social and Behavior Change Communication Coordinator.)