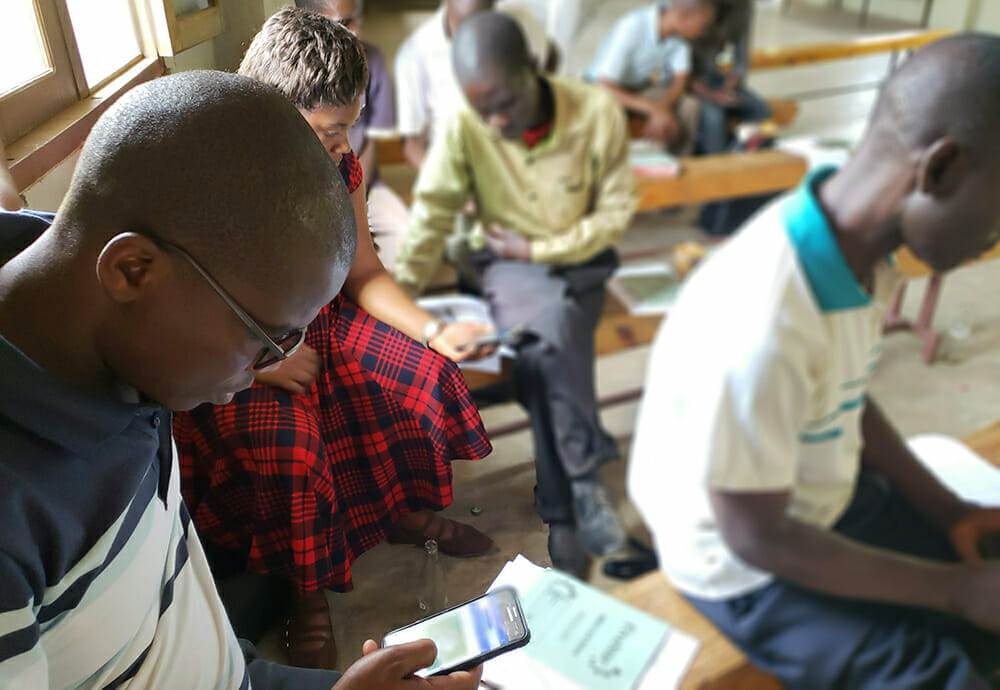 Mary Alick first saw a picture of the culprit while standing in her field among damaged crops of pigeon peas and maize.

Joseph Fayilosi, an Agricultural Extension Development Officer (AEDO) with the Government of Malawi, had come to offer his technical support and guidance. Alick is one of more than 4,200 farming households assigned to Fayilosi, who conducts at least three scouting visits per week in Machinga district.

Together, they peered at his smartphone as Fayilosi walked Alick through a learning module on fall armyworm (FAW), a relentless insect ravaging its way across sub-Saharan Africa. While FAW can feed on over 80 different kinds of crops, it prefers maize and had already begun to make a feast of Alick’s farmland. She is one of millions of smallholder farmers who face a growing threat to their livelihoods and food security because of FAW’s rapid spread. 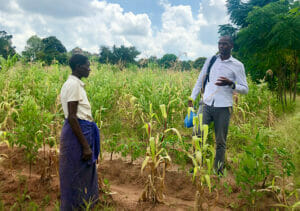 Joseph Fayilosi (r), an Agricultural Extension Development Officer with the Government of Malawi, offers technical support and guidance to Mary Alick, a smallholder farmer whose field was infested by fall armyworm. Photo by Jennifer Waugaman/PCI

“Fall armyworm poses a significant threat because it spreads quickly and can bore into crops causing significant yield losses. Potential damage is estimated to be in the billions over three years,” said Jennifer Waugaman, senior officer of Strategic Initiatives at Project Concern International (PCI). “While the Americas have learned how to deal with this native species, it is relatively new to Africa (first reported in 2016). Farmers have difficulty distinguishing it from other pests like African armyworm and do not know how to continuously scout for it in their fields or how to best take action when they do discover it.”

To help address this issue, PCI – in partnership with Dimagi – leveraged past experience responding to African armyworm to develop the AfriFARM app. Built on CommCare, an existing digital platform designed by Dimagi for low-resource settings, AfriFARM provides accessible and actionable information on FAW integrated pest management (IPM) to smallholder farmers and agricultural extension agents working to combat the pest. In November 2018, PCI and Dimagi won second place for the app in a technology challenge funded by the U.S. Agency for International Development’s Feed the Future initiative. 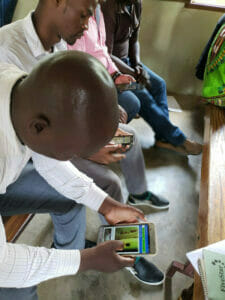 With the $75,000 award from the Fall Armyworm Tech Prize, PCI began pilot testing AfriFARM in the Balaka and Machinga districts of Malawi, where PCI has been implementing a food security project for the past four years. Fayilosi is one of 55 agricultural extension workers who received training to test the app from March through April 2019.

“[AfriFARM] has been used to do scouting in fields, identifying fall armyworm as well as capturing locations… getting the infestation rate while at the same time getting a way forward,” said Fayilosi, who used his experience visiting Mary’s field as an example of the app’s function and usefulness. AfriFARM provides three step-by-step, visual learning modules focused on improving smallholder farmers’ knowledge and capacity to identify, scout and treat FAW, and serves as an ongoing FAW IPM management tool for extension workers, field agents and farmers alike.

“It was good using the app and the farmer was able to see how fall armyworm looks,” said Fayilosi, who used AfriFARM to determine Alick’s field had a FAW infestation rate of 24%. “The farmer was advised not to spray since the crop was mature. However, she was advised to plant early in the next growing season, practice rotation as well as handpick where possible.”

With the dangers of toxic chemical exposure and little to no proper protective gear, overspraying pesticides can have serious consequences on the health and safety of smallholder farmers.

In addition to showing what FAW looks like at each stage of growth and what damage looks like in the field, AfriFARM helps extension agents with onsite counseling and decision support. The app automatically calculates plot sizes and infestation rates and then provides appropriate prevention and/or treatment options instantly. Recommendations are both non-chemical and locally approved chemical controls, and instructions are translated into the local language.

“It is simple, easy, fast and results driven as well as farmer interactive,” Fayilosi said.

During the pilot period, participants scouted a total of 167 smallholder farmer fields in Balaka and Machinga districts and determined more than 97% were infested with FAW. Prior to using AfriFARM, data like this was hard to capture and monitor. When it was recorded, agents had to write reports by hand and send them to the district office. Now, by using AfriFARM, agricultural extension workers can create digital case files for each farmer assigned to them, track the progress of their fields, and sync data to an online dashboard that creates an overall picture of FAW’s prevalence and severity in target areas. This two-way data flow enables agents to receive real-time feedback on how to best advise farmers onsite and provides data visualization to organizations and institutions like the Ministry of Agriculture so that they can coordinate more precise and timely responses to the pest. 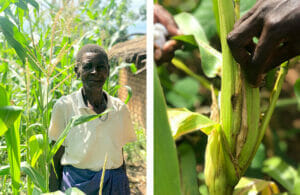 Mary Alick has been a smallholder farmer in Machinga district for nearly 45 years. She is one of millions who face a growing threat to their livelihood and food security because of fall armyworm’s rapid spread and destruction. Photos by Jennifer Waugaman/PCI

Ultimately, Waugaman said the pilot has revealed promising potential for users. In addition to employing a human-centered design approach from the start, PCI conducted several focus group discussions and usability studies to gain user-driven feedback on how to improve the AfriFARM user experience. PCI also conducted a survey before and after the pilot period to see if the app had any outcomes on the knowledge and attitudes of the users.

After only seven weeks of use, IPM knowledge on FAW among agricultural extension agents increased by 11% just by using the app. Given that all agents had received FAW IPM trainings prior to app exposure, this improvement is notable. In addition, agents saw a 110% increase in their confidence (47% pre-pilot to 100% post-pilot) in having the information they need to advise farmers on FAW. Participants also reported, on average, a 70% time savings due to the use of digital vs. paper tools and the ability to instantly sync data rather than filling out forms and writing reports. This enabled them to visit more fields per week and to spend more time building farmers’ capacity, among other benefits.

PCI intends to continue making user-driven app improvements and building on collaborative relationships with the Ministry of Agriculture, FAW National Taskforce, Machinga Agricultural Development Division and the private sector. During the pilot phase, PCI engaged with AGORA Malawi, a network of retail depot services, to train their commercial extension agents in their Farm Services Unit on AfriFARM.

“By exploring ways to use this technology with both the public and private sector,” said Waugaman, “we hope to bring AfriFARM to more farmers across the continent so they can better manage fall armyworm with their networks of support — be it an NGO field agent, government extension worker, or an agro-input dealer.”