Programming in Syria has Great Impact on Food Insecurity 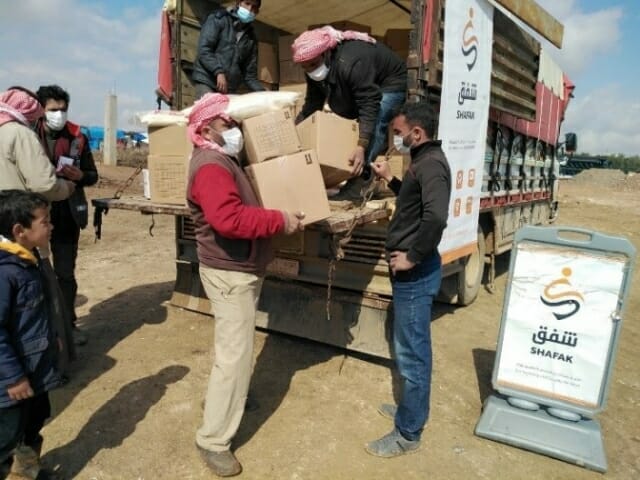 A more than ten-year-long crisis in Syria has affected the country’s entire population. Hundreds of thousands of Syrians have been killed and millions have been displaced, fleeing to avoid the fighting. Displaced families make up two-thirds of the population of Northwest Syria. According to the 2020 Humanitarian Needs Overview, more than 9 million people are food insecure across Syria, and 3.7 million of them live in Northwest Syria. In response, Global Communities meets the immediate needs of vulnerable families with the objective of increasing food security in Northern Syria. Since 2019 Global Communities has supported vulnerable families by distributing food baskets, ready-to-eat rations, bread and kitchen garden kits, and by assisting with mill and bakery rehabilitation. Additionally, fodder kit distribution is a complementary activity which uses the byproduct of the wheat milling process to aid struggling displaced livestock breeders.

Displaced people rely on food assistance from non-government organizations and charities to survive as the conflict persists, the economy continues to deteriorate, and agricultural production remains low. Local economies are in a downturn causing food prices to skyrocket while the devaluation of the Syrian Pound is sharply eroding the purchasing power of the most vulnerable households. The high cost of livestock inputs is the biggest challenge facing displaced livestock breeders in Northwest Syria. In response, Global Communities, with the financial support of the USAID Bureau for Humanitarian Assistance, has provided 1,023 rural families with livestock fodder kits and 383 families with fodder byproduct in Idleb and West Aleppo governorates.

Global Communities has distributed 67,577 Food Baskets to the Syrian families since the beginning of the program.

Samira, 30 years old, was displaced from the Southern Idleb area and currently lives in the village of Baliya. Samira is a widow with four children and was able to transport her own livestock during her displacement. As the head of her household, her livestock is her family’s only source of income and the displacement has greatly affected her economic status. The high price of fodder materials continues to be a major challenge for Samira, as she has been forced to use more than the usual share of her household’s savings to secure essential fodder for her livestock, especially in the winter season, and Samira’s inability to access natural pastures further exacerbates her condition.

Through Global Communities programming, Samira received fodder kits and used her savings to cover expenses for basic needs of her children instead of purchasing livestock fodder. Since receiving fodder assistance, Samira has noticed an increase in the milk production of her sheep, which enables her to make homemade dairy products to feed her children, freeing up more finances because she no longer needs to buy milk from the local market. Fodder materials are distributed in addition to the food basket Samira receives, and soon she will become eligible to receive a fodder kit.

Another recipient said, ‘’We are internally displaced people in this community, and we thank Global Communities for supporting us with fodder. Without your help, we were planning to sell our livestock for a cheap price as we cannot buy the fodder; you saved the livestock by this assistance.”