Rebuilding Lives and Livelihoods in the “Promised Land” 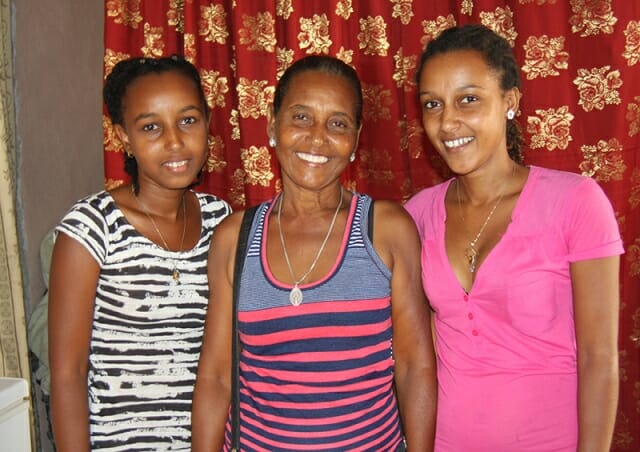 Maggy Pierre and her daughters are rebuilding their lives in the community of Canaan, Haiti.
Eight years after the Haiti earthquake, thousands of people are remaking their lives life in Canaan. The area is an emerging city located north of Port-au-Prince and has served as a space to relocate thousands of displaced people after the earthquake in 2010. Among the thousands of these new Canaan residents is Maggy Pierre, a 54-year-old mother of four. She relocated to Canaan in 2017 and built a small house. Known as the Promised Land, Canaan offered earthquake survivors the possibility of owning land and building a house. Despite the benefits of space and new housing, the settlement lacks basic services. Electricity is unreliable and some residents must walk long distances to secure safe water. Lack of roads makes access difficult and its location away from the city center means economic and employment opportunities for residents are also limited.

The Canaan Upgrading and Community Development (CUCD) program, funded by the United States Agency for International Development (USAID) and the American Red Cross (ARC), is working to fill some of these gaps. The program supports the Government of Haiti’s housing authority, Unité de Construction de Logements et de Batiments Publics (UCLBP), in its vision to promote equitable and resilient urban development in Canaan. CUCD aims to harness the energy and investments of Canaan’s residents to facilitate inclusive and planned growth in the urban development of Canaan.

Interventions under CUCD include building much needed community infrastructure like roads, public spaces, a drinking water network and a public lighting system. The program also aims to help residents develop more secure livelihoods and increase their ability to develop their own income-generating activities. As part of those livelihoods efforts, CUCD worked with residents to create Village Savings and Loan Associations (VLSA). These associations allow community members to pool their savings and then provide loans to its members on a rotating basis to finance small business start-ups, pay for schooling, cover medical bills or pay for other critical expenses as needed. In addition to provide micro-financing, VSLAs reinforce community ties. The loans are low-interest and pose limited risk, allowing members to invest, manage financial emergencies and save together.

Pierre’s shop in Canaan. After joining a Village Savings and Loan Association, she was able to expand her business and increase her daily profits by 500%.

At the time of the earthquake, Pierre was renting a house in Carrefour, a neighborhood south of Port-Au Prince. Upon resettling in Canaan, Pierre took the little money she had saved, 5,000 gourdes (approximately US $80), and started a small business. Since safe water was difficult to access, she started selling treated water to other residents. With her initial investment, she was able to earn 1,500 gourdes (US $24) a day. Despite for the demand for clean water, lack of access to credit meant that Pierre’s business growth was limited. She joined a VSLA group and with a loan of 15,000 gourdes (US $240), she expanded her business. She now earns 7,500 gourdes (US $120) a day and with the additional profit she earns, she has expanded the business to include food and cosmetic sales.
To date, CUCD has facilitated the creation of 51 VSLA groups with 1,472 members in Canaan. These groups have disbursed more than 900 loans worth nearly seven million gourdes (US $107,000) and have saved 8.5 million gourdes (US $132,000).

As news of the achievements and successes of the VSLA members has spreading, more members of the community have become interested and the number of VSLAs is increasing. In addition to helping create VSLAs, CUCD worked with a private sector bank, Sogexpress, to open the first formal financial institution in Canaan. Now residents have a safe place to keep their savings and access to more formal lines of credit. In order to help residents facilitate payments and transfers, Sogexpress also offers a mobile money network.

Pierre is thrilled with the expansion and growth of her business. “I started the business with a capital of 5,000 gourdes (US $80), and now the company has a capital of 75,000 gourdes (US $1,200). I am very excited and proud. My family is pleased with the progress of the company.” As a proud business owner and homeowner, Pierre feels like Canaan has fulfilled its name as the Promised Land.

Published 05/14/2018 by Global Communities in Blog, Haiti, The Americas