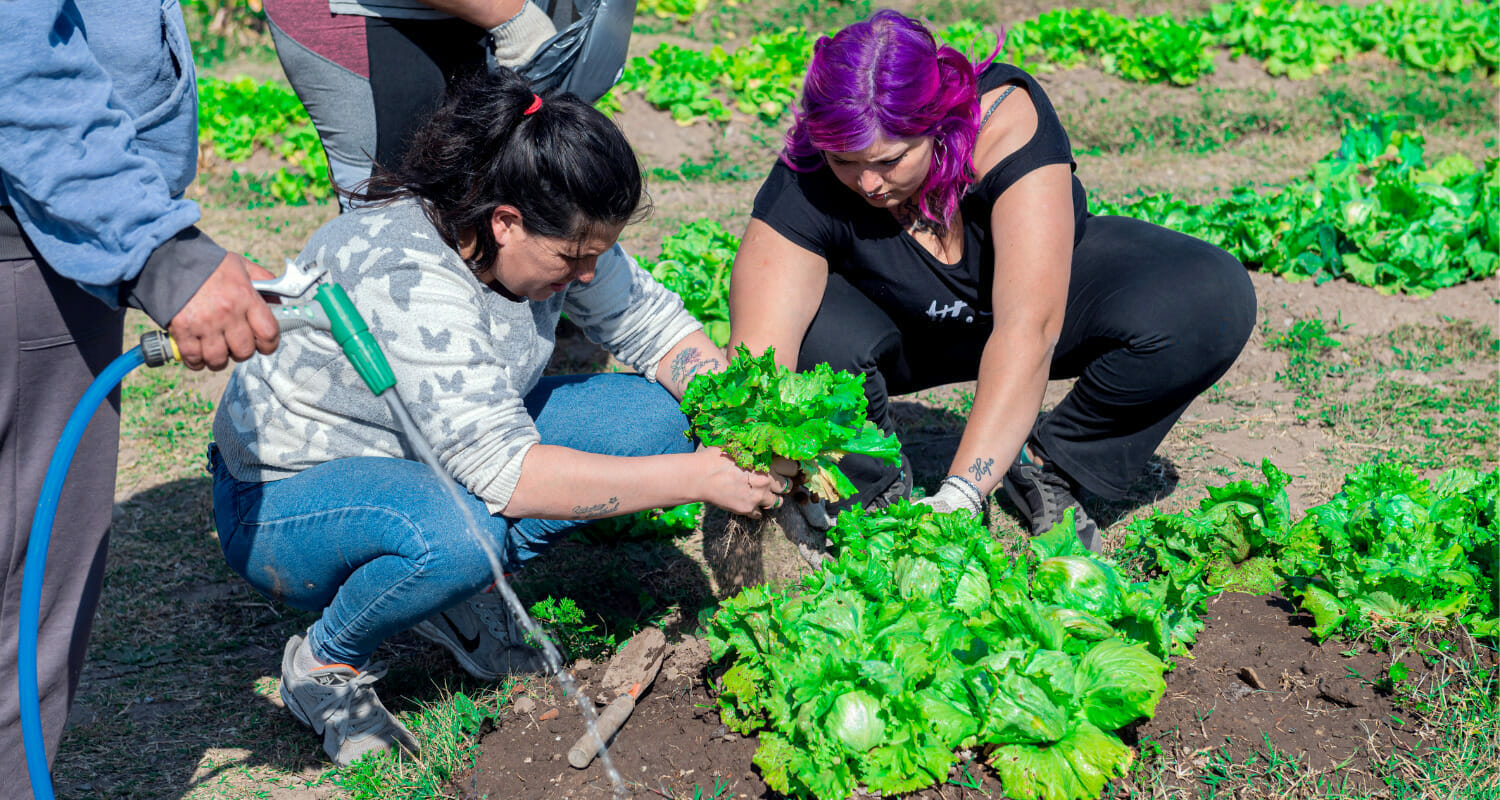 By: Sergio Scheffer and Natalia Lopez-Thismon

In the peripheral neighborhoods of cities in Argentina, it is not uncommon to find large empty lots gathering junk. Giuliana (Yuli) and her four children, including her 13-year-old son Tiziano (Tizi), lived next to one of these vacant lots.

Over the years, she and her neighbors have imagined ways in which the space near Granadero Baigorria in Nuestra Señora de la Paz could be transformed – from having a house built there or turning it into a community park.

“Anything besides that emptiness,” Yuli says

Tizi, though, was the first one who decided to do something about it.

To help his family with a little extra food, he decided to read a little about gardening and started by planting a few vegetables on the site.

Meanwhile, Global Communities Argentina – together with our local partner John Deere – saw an opportunity with the same empty lot and started conversations with the local municipality on how to make use of it. In keeping with Tizi’s budding plan, the idea became to start a community garden with support from Sowing Futures, a highly localized program which encompasses various projects, including another community garden in a different area of Argentina.

“Many of the families in these vulnerable neighborhoods depend on the local merendero, a food bank that offers free food assistance to people in socially vulnerable situations,” explains Facundo De Tomasi, Community Development Specialist at Global Communities Argentina.

When Sowing Futures approached Nuestra Señora de la Paz neighborhood with the idea of creating a community garden in the empty lot, Yuli and Tizi quickly joined. Tizi was excited about the possibility of learning more about growing vegetables, something that was slowly becoming his passion. The vacant lot slowly started to fill with people from the community, working hand in hand to prepare the land and plant vegetables.

Since work began on the lot in August 2021, the program has been training participants with the help of an agricultural engineer, Julian, as well as working with local partners to provide tools and the workforce to put up fences and raised garden beds. The municipal government arranged for running water to the community garden — an expensive and complicated endeavor.

“First, there were two small furrows,” says Yuli, adding that what surprised her the most was that the project kept attracting neighbors who were working side by side. “I thought project staff was only going to give us instructions, but now, on top of giving us the tools, they also came to teach us many new things so that we could all work together as equals.”

In describing the process from his perspective, Tizi shares how the task has not been easy but very fulfilling to see the garden come to life.

“There are different seasons to plant every crop. We need to be careful with ants and other parasites that can kill the plants,” he says. “You also must be careful when irrigating the plants; it’s not just pouring water. It is not a simple task to maintain a garden. Luckily, we learned so much with this project.”

The garden’s success is reflected by its capacity to scale. People come from different neighborhoods and cities near Granadero Baigorria to learn firsthand about the work and then go back to their community to do it themselves.

Today, Global Communities Argentina and the community garden participants of Nuestra Señora de la Paz are looking to expand the project by adding another plot of land and are in conversations with the municipal government to select that property.

“We are a big family,” says Yuli happily, emphasizing that all participants contribute the same level of effort, teaching each other and coordinating their time based on a rotating schedule to conduct all the different garden tasks. Yuli also said they often take photos and send them to Julian and Facundo, the two Sowing Futures staff supporting the garden, so that they can see the progress made by the community gardeners.

“The vegetables we get from the garden are much better than those from any grocery store,” says Tizi. “You will never find a lettuce this good, because it doesn’t have any chemicals. Everything here is grown naturally. How can they not be delicious?”

Community members have benefited from the vegetables and legumes they’ve grown in the garden since they started and are planning on selling their products and expanding the business with a tree nursery and pumpkin patch soon.

As for Tizi, he went from living next to an empty lot gathering junk to having a place where he can learn, dream and look forward to the future. He is now considering becoming an agricultural engineer, just like Julian.

“I would like one day to do what they do,” Tizi says. “I like it because they know things and they help people.”

Published 10/14/2022 by Natalia Lopez-Thismon in Blog, Argentina, The Americas

Increasing the Climate Resilience and Productivity of Emerging Farmers in Zambia

In Zambia, agriculture is a key employment sector and one that is essential to local food security. However, emerging farmers are facing many challenges, including fall armyworm threatening their fields, climate variabilities and poor agricultural productivity. Global Communities, Corteva Agriscience, John Deere and the U.S. Agency for International Development (USAID) partnered in 2020 with the…