New ideas about what it means to be a father and husband are beginning to take root in rural villages of Tanzania. To know this, Beyu Sayi says he has to look no further than the sweet potato plants.

Sayi, a nutritionist and District Field Supervisor with the EFFECTS project, tells a story about a male participant to better explain this connection:

“He said, ‘My wife used to go alone to farm sweet potatoes, as this is regarded as a female crop that women grow for family consumption. I decided why not help her, as it will save time for her to be able to take care of our kids. One day, some people found me planting potato seedlings and they were very surprised, [because] they had never seen a man planting potato seedlings before. They asked, ‘Where is your wife? Did she leave you?’ I said, ‘No, she is home. She is taking a child to the clinic.’ I wouldn’t have the courage to do this if it was not for the discussions and learning from [EFFECTS] group sessions.’”

PCI, a Global Communities Partner, designed the Engaging Fathers for Effective Child Nutrition and Development in Tanzania (EFFECTS) project to measure the impact of engaging fathers in peer-group based nutrition and bundled nutrition and parenting interventions. A total of 960 households (mother and father) with children 0-18 months of age are enrolled in the study, which takes place over the course of a year and consists of biweekly peer group sessions facilitated by community health workers (CHWs).

“As a father who wants to see my children growing well, I wanted to get the skills to make that possible,” said Mutata Mujinja, who is one of 96 CHWs facilitating 64 women’s peer groups and 32 men’s peer groups in Butiama and Musoma Rural districts. “Also, I wanted to be part of helping my community.”

The 38-year-old farmer and father of five describes a culture where men have long held the decision-making power and women are expected to raise the children.

“Women are just told what to do. They cannot question or ask a reason behind any decision,” Mujinja said. “… Once they bring money or food, fathers have nothing to do with children.”

Through the EFFECTS project, CHWs such as Mujinja invite parents to use their peer group as a safe space for reflection and discussion on how to break down these barriers and take a more family-centered approach to child nutrition and development. Topics include infant and young child feeding, couples communication, stress management, responsive caregiving and play and communication, praise and positive discipline, conflict resolution, food access, water, sanitation and hygiene, and other nutrition or parenting-related subjects and practices. Participants also engage in skill-building activities around cooking balanced meals and establishing home gardens.

Mujinja says men who once shied away from domestic duties and had little interaction with their children now take pride in creating a healthy and nurturing home environment with their wives as partners in family decisions.

“It was unusual for a father to carry a child around, but now most fathers, especially [EFFECTS] participants, do that,” he said. “Fathers fetch water with bicycles to help their wives. They go to the market and buy food. They are not afraid of how the community or other people will think of them.”

One couple from Busaraga village, who work as farmers and have four children, said their involvement in the EFFECTS project has improved how they communicate with each other and interact as a family. The wife said she is happy to be more involved in household budgeting and planning, while the husband has discovered a newfound pleasure in cooking.

“We can now work together. I can cook and help with feeding the child, and I enjoy doing that,” said the husband. “In early days, you could never find me cooking while my wife is at home and healthy.”

After seeing how gestures like preparing meals and taking on some of the household chores has improved his relationship with his wife, the husband has encouraged other men in his community to rethink their roles and responsibilities.

“My neighbor’s wife was at the farm and the husband was in town selling milk, but he was back home earlier than his wife and brought some food to be cooked for lunch,” the EFFECTS participant shared. “He was sitting [and] waiting for his wife to come back and cook, so I tried to persuade him by telling him how happy his wife will be if she came back home tired to find her husband has helped with cooking and the children had eaten on time. He agreed and cooked with the help of his older daughter and said his wife was very surprised and very happy. … I told him to continue helping.”

From making sure their homes have toilets and tippy taps (handwashing stations) to escorting their wives to the clinic, men participating in EFFECTS are beginning to transcend traditional gender roles and recognizing the value of active parenting.

“Men have come to understand their responsibilities as fathers in the family, especially in child nutrition and development,” said Lilian Mgeni, a District Field Supervisor for the EFFECTS project. “They understand even playing together with their children matters. Feeding them and talking to them matters a lot, and it’s not a mother’s responsibility only.” 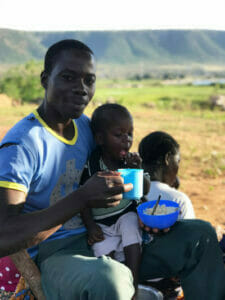 The Engaging Fathers for Effective Child Nutrition and Development in Tanzania (EFFECTS) project is funded by the Eleanor Crook Foundation and Conrad N. Hilton Foundation and implemented by PCI in collaboration with the Harvard T.H. Chan School of Public Health, Purdue University and the Africa Academy of Public Health.

Since the onset of COVID-19 in March, PCI has adapted the EFFECTS model from a bi-monthly peer group-based model to a bi-monthly home visit model in which Community Health Workers will facilitate counseling and coaching to mothers, fathers and couples at the household level.

Staff have developed, translated and finalized new session content for the remainder of the study that integrates messaging and discussions on COVID-19 transmission and symptoms, prevention and care-seeking practices.