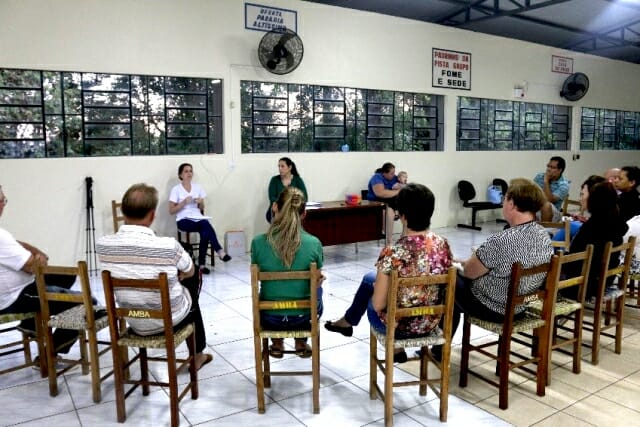 As she tells her story, Adriana Ferreira’s pensive eyes show the culmination of a dream that she might not have even imagined possible: being a source of inspiration in other people’s lives. Adriana, a 40-year old mother of three children and soon to be grandmother, is a community development volunteer and the President of the Alvorada neighborhood association in Horizontina.

The community leader graduated from the Community Participatory Management (PACE) course in 2016 and has been actively working in her community ever since. With a new class of community leaders undergoing the same PACE training, Adriana now has the opportunity of sharing her knowledge and experience with the new cohort of leaders in training. In this way, with her voice pausing between one word and the next, she told the story of a dream she had not envisioned, but which has already brought her immense personal fulfillment. “I have always tried to help with the planning and implementation of improvements for the neighborhood where I live, but I never thought that my volunteering would serve as an example to others. It was exciting to be involved in the new cohort’s classes “, she says.

Adriana explained to the new leaders what she has accomplished for Alvorada with the support of Sowing Futures and the neighborhood association: the renovation of the sports complex, the revitalization of the square, and the improvement of the neighborhood association hall. In addressing the new leaders, Adriana states: “After Global Communities arrived in 2018, we learned to better develop the abilities of each person in the group and include them in action planning. We have also been successful in delegating different responsibilities to each individual in the group.”

Twenty-one years ago, Adriana moved to Alvorada as a newlywed. She remembers that, at that time, the neighborhood did not even have streets. Since then, Alvorada has grown in parallel to her family: Adriana had her eldest son, then a girl and, 19 years later, she carries on her lap a baby that is only a few months old. Later this year, she will become a first-time grandmother . At the same time, the neighborhood has grown a lot too, including the addition of more houses and lighting. “The growth of my family has mirrored the development of the neighborhood and our love for where we live has increased. Today I am happy that my family and I live in this same neighborhood I helped build and improve.”

As the number of community actions increases, the group of community development volunteers in Alvorada has also grown. “Now that everyone sees that unity leads to strength, we have a lot more participation. This is what I tried to pass on to the new leaders from the other neighborhoods. Before sharing my experience, I was nervous about what it would feel like to experience such a special accomplishment: inspiring others to build a better society in which to live. It is gratifying to share this knowledge and continue learning from each other. That’s the most important thing.”

Working daily towards a shared dream
Eduardo Maron is a John Deere employee and the former President of the Ouro Verde Neighborhood Association. Since being trained on PACE, he has gone on to give lectures in other cities on how to form strong groups aimed at carrying out improvement projects and how to support community development. From street cleanings to basic sanitation projects, his group has now been putting into action for almost three years what Eduardo and other leaders learned from the trainings. “It’s a dream that we build with every meeting, with every idea and with every project,” he says.

Eduardo’s journey has been gradual. Between failures and achievements, he has relied on a team of neighbors who believed in their common dream. When he shared these achievements with the new class of community leaders, he reminded them that nothing was easy. “The experiences we have gained up until today show us that we are on the right path. We faced difficulties together and we now were learning to deal with each challenges as it arises. ”
The conversation that Eduardo, as facilitator, spurred within the class was productive for all involved: “I managed to encourage them with the stories of our neighborhood group and in return they offered new perspectives on the work we are carrying out in the neighborhood. This exchange is good for everyone. This is community development.”

A methodology that transforms
Global Communities works with tools and methodologies that transfer knowledge and stimulate local capacity building in order to develop and strengthen local communities, organizations and people. According to Giovana Kuhn, a specialist in Community Development, PACE is one such tool. “PACE works with community leaders to show them how to drive long-term development. Through this methodology, they become agents of positive change.”
This quarter, Sowing Futures offered a 64-hour PACE training in Horizontina. It was the first time that current community leaders had the chance of sharing their experiences. “[This opportunity] only intensified the importance of the course. Participants shared experiences, encouraged each other and learned together. They created bonds that will allow one neighborhood to help the next. That is the goal of our program” explained Roseli Bianchi, a volunteer specialist responsible for the PACE training.

Adriana and Eduardo, traced their trajectory as community leaders alongside their communities. They took their first steps along this path when the Sowing Futures activities initiated, among residents, an interest in improving their neighborhood. This curiosity and potential for changing their surroundings led the residents to participate in the PACE training and, from there, to begin applying their new knowledge and techniques towards improving their communities. After that, the next step came naturally: becoming chairs of their respective neighborhood associations. In leading these groups, both Adriana and Eduardo have expanded their skills, boosted community participation and brought tangible improvements to their neighborhoods. Now, they are participating in the transition process for their associations’ Boards of Directors, supporting the new leaders and sharing experiences with residents of other districts and cities.

Published 08/05/2019 by Global Communities in Blog, Brazil, The Americas