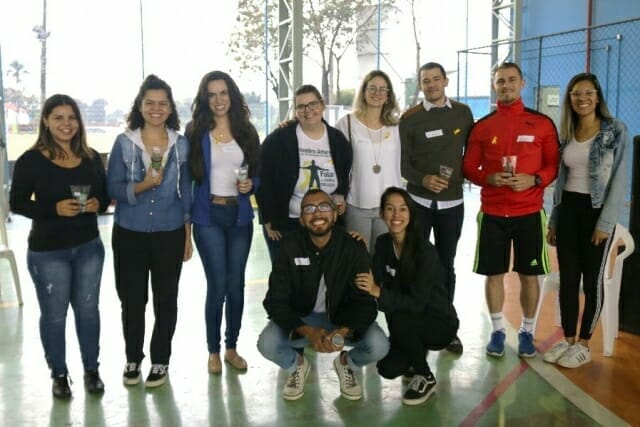 Youth from the Jardim Oliveira Camargo community in Indaiatuba / SP have recently designed a new project that aims to support residents who are suffering from depression and other mental and emotional illnesses.
Priscila Santos and her longtime friends, Edson Guedes and Taylane Souza, were practically raised together in Jardim Oliveira Camargo. Over the years, the trio have shared many experiences, whether on the streets of the neighborhood, at the local school, or in the Catholic youth group they attend.

Despite the warm and welcoming atmosphere of their small neighborhood of about 4,000 residents, the friends found that cases of depression and other emotional problems had increased considerably over time in the community around them, especially among poor younger residents.

“I have been a resident of Jardim Oliveira Camargo since I was born 28 years ago, and have never seen so many people who are as depressed or emotionally distressed as today. These people needed our help, but I felt that we were not yet prepared to offer this kind of support,” says Santos.

It was from this realization that the three friends decided to work together to devise a series of initiatives to support their fellow community members experiencing emotional and mental health issues, as well as the families who act as their support systems. Despite the group’s determination to create a mental health support network, the task was not easy at first.

The youth had no experience with community projects and realized that the initiatives would only come to fruition through alliances with community institutions and the work and willingness of the residents themselves. It was this realization that led Santos to mirror the best example she had at home. Her father, Salvador Santos, is an active community leader in Jardim Oliveira Camargo and has participated in various community initiatives, including the Sowing Futures Community Development Committee -CDC, since 2017.

“We really wanted to help, but we really didn’t know where to start. Therefore, the help we received from the Sowing the Futures program was of paramount importance, especially in guiding the process we had to take to make these events happen and also in the financial support we received through the Community Fund. It would have been much more complicated without this help, as we had no experience with projects and had never dealt with an event this size,” says Santos.

With the help of the John Deere Foundation-funded Sowing Futures program, which is implemented in Brazil by Global Communities, the team came up with a project plan and formed vital community alliances. Their first initiative, called #TamoJunto, which means “We’re together,” took place during the Yellow September campaign, an entire month dedicated to suicide prevention. For this first event, health professional volunteers gave lectures to a group of about 94 attendees at Wladimir Oliver School. The event brought a sense of unity and welcoming to the community.

“This type of event is very important because we are a community and we should consider ourselves like a family, because we live in a small and socially vulnerable neighborhood where everyone knows each other. This feeling of caring about others is exactly what we wanted to bring about with this project,” says Souza.
Daniel Felipe Santos, a volunteer psychologist in action, believes that initiatives created by young people are a breath of hope for this age group, which currently has to deal with increasing mental health issues. “I really believe that what will make change in the world are the children – the young people. And during this event we saw the results of their commitment and work of going after and getting professionals to offer their support to the whole community.”

Stemming from the awareness that the work of mental illness prevention is not a one-time solution and needs to occur frequently, one of the project’s ongoing activities includes weekly community conversations. “Our intention is to continue to build this support network by conducting conversation circles, as we are looking to strengthen our community and help those in need of support as well as their families. We are very pleased with the partnerships we have achieved so far – it is through them that we will be able to give the project a long life,” says Guedes.
These meetings, which are already bringing together diverse audiences, are held in partnership with the Reference Center for Social Assistance (CRAS) and volunteer health professionals from Indaiatuba and around the region. In recent discussions, subjects such as youth depression, postpartum depression, self-care, anxieties and life expectations were addressed.

In addition, the fruits of the project are already being harvested with a greater demand for help from the public facilities available to the neighborhood. For psychosocial care center (CAPS) occupational therapist, Barbara Corá, projects like #TamoJunto bring young people closer to getting the help they need and encourage a starting point for overcoming depression and other emotional problems.

“With encouragement and support in this process, a young person is more amenable to seeking out treatment options. The biggest issue before was that young people weren’t aware of how to or in which outlets to communicate their issues, so they would often “hide” their suffering. Initiatives such as #TamoJunto undoubtedly bring the community a better idea of what services and resources are available, because it promotes the identifying and embracing of mental health spaces. It also helps to demystify problems related to mental illness,” says Corá.

Published 01/21/2020 by Global Communities in Blog, Argentina, The Americas