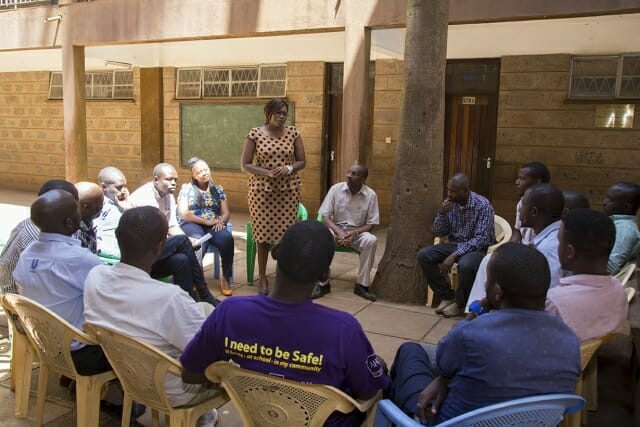 A project in Kenya that addresses sexual health and gender-based violence (GBV) is taking a novel approach by deliberately involving men and boys in its outreach. Global Communities implements the PEPFAR-funded DREAMS project, which works with adolescent girls and young women (AGYW) to ensure they lived Determined, Resilient, Empowered,  AIDS-free, Mentored and Safe Lives in Kenya and Rwanda.

The girls who are part of the DREAMS project are some of the most vulnerable among Kenyan youth. Many AGYW in Kenya living in extreme poverty are forced to support themselves and their families with sex work. Their education levels are low, especially if they have dropped out because of pregnancy or health problems, and often the education level of their parents is low too. Women often need male permission to seek family planning and basic healthcare. And in cases of rape, oftentimes the offender settles the score with a bottle of brew for the girl’s parents and all is forgiven.

The DREAMS project targets boys and men in its programming to prevent and address GBV using community health volunteers to serve as ambassadors in the communities of Mombasa, Kilifi, and Kwali, all located nearly 300 miles from Nairobi, Kenya’s capital city.  Involving them in the project is a new approach to make sure they are educated and armed with the knowledge they need to reduce GBV in their communities by challenging outdated practices and attitudes. To this end, a community resource center that includes information, referrals and trusted adults with mechanisms in place to help are all becoming the norm in these counties. Mentorships with guidance and counseling help individuals overcome the idea that school is a luxury for boys, and that girls in school is a wasted investment for females. Many people hold this view, thinking that girls will only end up taking care of house and children anyway so they need not be educated.

The outreach to men and boys also helps reduce susceptibility to violent extremism and other forms of radicalism that plague underserved, unemployed communities in Kenya. It also keeps the focus on them so that they are aware of their role and the expectations of them, so they do not see GBV as merely a women’s issue that doesn’t affect them. The YMCA, a DREAMS partner, talks to boys to help them understand what is acceptable. It is important for them to know from early ages that GBV has a negative effect on individuals, families and communities – especially because young people will model their behavior and attitude on those of the adults around them – so the cycle of violence can be broken. The outreach also involves meeting with men and explaining to them the ill effects of sex with underage girls, which is illegal but which is currently not considered a taboo in many areas of Kenya.

The mentoring initiative – already with more than 250 graduates and professionals – has been effective with men and boys in part because it is voluntary, and because they have seen the difference it makes in their communities.